According to the competitive exclusion principle, species less suited to compete for resources should either adapt or die out, although competitive exclusion is rarely found in natural ecosystems. According to evolutionary theory, this competition within and between species for resources plays a very relevant role in natural selection, however, competition may play less of a role than expansion among larger clades,[3] this is termed the 'Room to Roam' hypothesis.[2]

The following terms describe mechanisms by which competition occurs, which can generally be divided into direct and indirect. These mechanisms apply equally to intraspecific and interspecific competition. 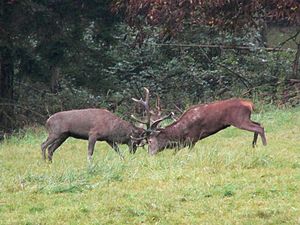 Interference competition
Occurs directly between individuals via aggression etc. when the individuals interfere with foraging, survival, reproduction of others, or by directly preventing their physical establishment in a portion of the habitat. An example of this can be seen between the ant Novomessor cockerelli and red harvester ants, where the former interferes with the ability of the latter to forage by plugging the entrances to their colonies with small rocks.

Exploitation competition
Occurs indirectly through a common limiting resource which acts as an intermediate. For example, use of resources depletes the amount available to others, or they compete for space. Also known as exploitative competition.
Apparent competition
Occurs indirectly between two species which are both preyed upon by the same predator.[4] For example, species A and species B are both prey of predator C. The increase of species A may cause the decrease of species B, because the increase of As may aid in the survival of predator Cs, which will increase the number of predator Cs, which in turn will hunt more of species B.[5]

Intraspecific competition occurs when members of the same species compete for the same resources in an ecosystem. The organism that obtains less resources, will usually perform less well than if it lives alone, Although in this situation it may actually be more useful to think in terms of resource availability than competition.

Interspecific competition may occur when individuals of two separate species share a limiting resource in the same area. If the resource cannot support both populations, then lowered fecundity, growth, or survival may result in at least one species. Interspecific competition has the potential to alter populations, communities and the evolution of interacting species.

An example among animals could be the case of cheetahs and lions; since both species feed on similar prey, they are negatively impacted by the presence of the other because they will have less food, however they still persist together, despite the prediction that under competition one will displace the other. In fact, lions sometimes steal prey items killed by cheetahs. Potential competitors can also kill each other, and this phenomenon is called 'intraguild predation'. For example, in southern California coyotes often kill and eat gray foxes and bobcats, all three carnivores sharing the same stable prey (small mammals).[6]

An additional example among protozoan involve Paramecium aurelia and Paramecium caudatum. Russian ecologist, Georgy Gause, studied the competition between the two species of Paramecium that occurred as a result of their coexistence. Through his studies, Gause proposed the Competitive exclusion principle, observing the competition that occurred when their different ecological niches overlapped.[7]

Competition has been observed between individuals, populations and species, but there is little evidence that competition has been the driving force in the evolution of large groups. For example, between reptiles and mammals. Mammals lived beside reptiles for many millions of years of time but were unable to gain a competitive edge until dinosaurs were devastated by the Cretaceous–Paleogene extinction event.[2]

In evolutionary contexts, competition is related to the concept of r/K selection theory, which relates to the selection of traits which promote success in particular environments. The theory originates from work on island biogeography by the ecologists Robert MacArthur and E. O. Wilson.[8]

In r/K selection theory, selective pressures are hypothesised to drive evolution in one of two stereotyped directions: r- or K-selection.[9] These terms, r and K, are derived from standard ecological algebra, as illustrated in the simple Verhulst equation of population dynamics:[10]

Within Species and Between Species 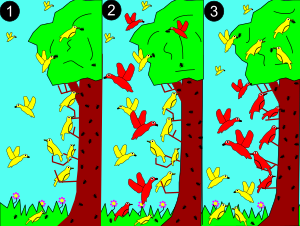 The Competitive Exclusion Principle states that two species aren't able to coexist at constant population values competing for the same resource. In this example, stage 1 shows a smaller (yellow) species of bird originally foraging for insects across the whole tree. In stage 2, a larger, invasive (red) species of bird is introduced into the environment and competes with the yellow bird for resources. As time goes on, the invasive red species dominates the yellow species in competition for the middle part of the tree and for the more abundant resources, as shown in stage 3. The yellow species then adapts to its new niche and both birds thrive without competition.

To explain how species coexist, in 1934 G. F. Gause proposed the competitive exclusion principle which is also called the Gause principle: species cannot coexist if they have the same niche. The word "niche" refers to a species' requirements for survival and reproduction. These requirements include both resources (like food) and proper habitat conditions (like temperature, pH ). Gause reasoned that if two species had identical niches (required identical resources and habitats) they would attempt to live in exactly the same area and would compete for exactly the same resources. If this happened, the species that was the best competitor would always exclude its competitors from that area. Therefore, species must at least have slightly different niches in order to coexist. Peter Grant and colleagues tested Gause's principle by studying seed-eating finches (birds) that live on the Galapagos Islands in the Pacific Ocean. They found that different finch species can coexist if they have traits that allow them to specialize on particular resources. For example, two finch species, Geospiza fuliginosa and Geospiza fortis, vary in a key trait: beak size. Beak size is a critical trait because it determines the size of a seed that a finch can eat: Individuals with small beaks eat small seeds, individuals with intermediate sized beaks can eat intermediate size seeds and individuals with large beaks can eat large seeds. G. fuliginosa and G. fortis do compete for intermediate sized seeds because each species has some individuals with intermediate sized beaks. However, G. fuliginosa specializes upon smaller seeds because it has more individuals with small beaks. Conversely, G. fortis specializes upon larger seeds because it has more individuals with large beaks. Thus, these species niches differ slightly because a specific trait, beak size, allows them to specialize upon a particular seed size. Joe Connell also tested Gause's principle by studying barnacles (shelled marine organisms) that live on rocks along European coastlines. In 1961, Connell found that two barnacle species, Balanus and Chthamalus, can coexist because they differ in two traits: growth rate and vulnerability to desiccation. Balanus's growth is rapid, which allows it to smother and crush the slower-growing Chthamalus. Balanus, however, dies close to shore because it gets too dry during low tide. In contrast, Chthamalus tolerates these dry conditions. Consequently, even though Balanus is a better competitor for space, these barnacles coexist because Chthamalus can survive in areas that Balanus cannot survive. These and many other examples support the competitive exclusion principle: Species can only coexist if they have different niches.

Competition can cause species to evolve differences in traits. This occurs because the individuals of a species with traits similar to competing species always experience strong interspecific competition. These individuals have less reproduction and survival than individuals with traits that differ from their competitors. Consequently, they will not contribute many offspring to future generations. For example, the finches previously discussed can be found alone or together on the Galapagos Islands. Both species' populations actually have more individuals with intermediate-sized beaks when they live on islands without the other species present. However, when both species are present on the same island, competition is intense between individuals that have intermediate-sized beaks of both species because they all require intermediate sized seeds. Consequently, individuals with small and large beaks have greater survival and reproduction on these islands than individuals with intermediate-sized beaks. A ground finch on Santa Cruz Island in the Galapagos. Different finch species can coexist if they have traits—for instance, beak size—that allow them to specialize on particular resources.Studies show that when G. fortis and G. fuliginosa are present on the same island, G. fuliginosa tends to evolve a small beak and G. fortis tends to evolve a large beak. The observation that competing species' traits are more different when they live in the same area than when competing species live in different areas is called character displacement. For the two finch species, beak size was displaced: Beaks became smaller in one species and larger in the other species. Studies of character displacement are important because they provide evidence that competition plays a very important role in determining ecological and evolutionary patterns in nature.This is also known as the evolution of specialization.