Competitors for the Crown of Scotland

With the death of King Alexander III in 1286, the crown of Scotland passed to his only surviving descendant, his three-year-old granddaughter Margaret. In 1290, the Guardians of Scotland, who had been appointed to govern the realm during the young Queen's minority, drew up the Treaty of Birgham, a marriage contract between Margaret and the five-year-old Edward of Caernarvon, heir apparent to the English throne. The treaty, amongst other points, contained the provision that although the issue of this marriage would inherit the crowns of both England and Scotland, the latter kingdom should be "separate, apart and free in itself without subjection to the English Kingdom".[1] The intent, clearly, was to keep Scotland as an independent entity.

Queen Margaret died in early October in Orkney on her way to Scotland, leaving the throne vacant. The Guardians called upon her fiancé's father, Edward I of England, to decide between various competitors for the Scottish throne in a process known as the Great Cause. One of the strongest claimants, John Balliol, Lord of Galloway, forged an alliance with the powerful Antony Bek, Bishop of Durham, the representative of Edward I in Scotland and began styling himself 'heir of Scotland',[2] while another, Robert Bruce, 5th Lord of Annandale, turned up to the site of Queen Margaret's supposed inauguration with a force of soldiers amidst rumours that his friends the Earl of Mar and the Earl of Atholl were also raising their forces.[3] Scotland looked to be headed for civil war.

Edward I steps in

To avoid the catastrophe of open warfare between the Bruce and Balliol, the Guardians and other Scots magnates asked Edward I to intervene.[4] Edward seized the occasion as an opportunity to gain something he had long desired — legal recognition that the realm of Scotland was held as a feudal dependency to the throne of England. The English kings had a long history of presuming an overlordship of Scotland, harking back to the late 12th century when Scotland had actually been a vassal state of England for 15 years from 1174 (Treaty of Falaise) until the Quitclaim of Canterbury (1189), but the legality of the 13th century claim was questionable. Alexander III, giving homage to Edward, had chosen his words very carefully: 'I become your man for the lands I hold of you in the Kingdom of England for which I owe homage, saving my Kingdom'[5] (author's italics).

In line with this desire, Edward demanded in May 1291 that his claim of feudal overlordship of Scotland be recognised before he would step in and act as arbiter. Indeed, he went so far as to demand that the Scots produce evidence to show that he was not the lawful overlord rather than presenting them with evidence that he was.[3] The Scots' reply came that without a king there was no one in the realm responsible enough to possibly make such an admission, and so any assurances given by the Scots were worthless. Although technically and legally correct by the standards of the time, this reply infuriated Edward enough that he refused to have it entered on the official record of the proceedings.[3]

The Guardians and the claimants still needed Edward's help, and he did manage to pressure them into accepting a number of lesser though still important terms. The majority of the competitors and the Guardians did eventually step forward to acknowledge Edward as their rightful overlord, even though they could not be taken as speaking for the realm as a whole.[3] They also agreed to put Edward in temporary control of the principal royal castles of Scotland despite the castles in question not being theirs to give away.[4] For his part, Edward agreed that he would return control of both kingdom and castles to the successful claimant within two months.[4] In the ongoing negotiations between the two countries, the Scots continued to use the Treaty of Birgham as a reference point, indicating that they still wished to see Scotland retain an independent identity from England.[3]

Having got these concessions, Edward arranged for a court to be set up to decide which of the claimants should inherit the throne. It consisted of 104 auditors plus Edward himself as president. Edward chose 24 of the auditors while the two claimants with the strongest cases — Bruce and Balliol — were allowed to appoint forty each. 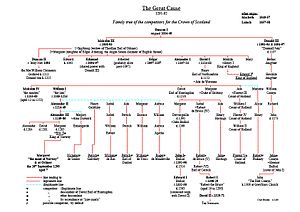 There were fourteen nobles who put themselves forward as candidates for the throne, as follows:[6]

In reality only four of these men had genuine claims to the throne: John de Hastings, Balliol, Bruce and Floris V. Of these only Bruce and Balliol had realistic grounds on which to claim the crown. The rest merely wished to have their claims put on the legal record.

John Hastings, an Englishman with extensive estates in Scotland, could not succeed to the throne by any of the normal rules governing feudal legacy and instead had his lawyers argue that Scotland was not a true kingdom at all, based, amongst other things, on the fact that Scots kings were traditionally neither crowned nor anointed. As such, by the normal rules of feudal law the kingdom should be split amongst the direct descendants of the co-heiresses of David I. Unsurprisingly, a court made up of Scots nobles rejected these arguments out of hand.[3]

John Balliol had the simplest, and thus, by some measure, the strongest claim of the four. By the tradition of primogeniture, he was the rightful claimant, and that tradition had been followed in choosing heirs to the Scottish throne since King Edgar in 1097.[3] Indeed, the other Scottish claimants (including Bruce) had already tacitly acknowledged the tradition of primogeniture in allowing Margaret of Norway to claim the throne. Balliol also argued that the Kingdom of Scotland was, as royal estate, indivisible as an entity. This was necessary to prevent the kingdom being split equally amongst the heirs as Hastings was suggesting should be done.

Robert Bruce a Scotsman was the next in line to the throne according to proximity of blood. As such, his arguments centered on this being a more suitable way to govern the succession than primogeniture. His lawyers suggested that this was the case in most successions and as such had become something of a 'natural law'. Unfortunately for Bruce, the Scots' tradition for the preceding 200 years had been demonstrably different, relying on primogeniture instead. They also put before the court the suggestion that Alexander III had designated Bruce as heir when he himself was still childless.[7] Whatever the truth of this, the fact remained that Alexander did eventually produce a male heir and that in the same period John Balliol also produced sons, all of whom would have a stronger claim than Bruce. Bruce also began by arguing alongside Balliol that the kingdom was indivisible, but when it became apparent that his own claim was going to fail he instead performed a rapid U-turn and joined Hastings in arguing that it be split amongst the three senior claimants,[4]

Floris V's argument was that Earl David had resigned the right of himself and his heirs.[3] Although Floris was not a direct descendent of David I, he claimed that David had given up his right to the throne to his brother William in exchange for a grant of land in Aberdeenshire. If true, this would make Floris the rightful King of Scotland. Floris claimed that although he did not possess copies of the documents detailing, the handover of power one must exist somewhere in Scotland, and Edward postponed the court for a full ten months while a search was made through various castle treasuries.[3] No copy was found at the time, but copies later surfaced at Pluscarden.[3] One of the early "certified copies", dating the certification seals of the bishop of Moray and the prior of Pluscarden to 1291, is currently located in the Hague.[3] This document is thought to be a forgery.[3]

Floris's case was rejected for lack of evidence. However, there is evidence that he entered into an agreement with Bruce in which if one of them was to successfully claim the throne, he would grant the other one third of the kingdom as a feudal fief.[1] Other clauses in the agreement strongly suggest that of the two, only Bruce could really expect to be a successful claimant. This has been interpreted to mean that Floris and Bruce were in collusion, with Bruce hoping that taken together their arguments could defeat Balliol, with Bruces's claim then being upheld in favour of Floris'.[3] It is striking that there is no record of Bruce and Floris being at loggerheads during the proceedings.

Edward gave judgment on the Scottish case on November 17, 1292 in favour of John Balliol,[2] with his son Edward becoming heir designate. This decision had the support of the majority of Scots nobles and magnates, even a number of those appointed by Bruce as auditors. Of special note was the support of John II Comyn, another competitor and head of the most powerful baronial family in Scotland, who was married to Balliol's sister, Eleanor. In later years the Clan Comyn would remain staunch supporters of the Balliol claim to the throne.