A comprehensive school is a state school that does not select its intake on the basis of academic achievement or aptitude. This is in contrast to the selective school system, where admission is restricted on the basis of selection criteria. The term is commonly used in relation to England and Wales, where comprehensive schools were introduced on an experimental basis in the 1940s and became more widespread from 1965. About 90% of British secondary school pupils now attend comprehensive schools. They correspond broadly to the public high school in the United States and Canada and to the German Gesamtschule.[citation needed]

Comprehensive schools are primarily about providing an entitlement curriculum to all children, without selection whether due to financial considerations or attainment. A consequence of that is a wider ranging curriculum, including practical subjects such as design and technology and vocational learning, which were less common or non-existent in grammar schools. Providing post-16 education cost-effectively becomes more challenging for smaller comprehensive schools, because of the number of courses needed to cover a broader curriculum with comparatively fewer students. This is why schools have tended to get larger and also why many local authorities have organised secondary education into 11–16 schools, with the post-16 provision provided by Sixth Form colleges and Further Education Colleges. Comprehensive schools do not select their intake on the basis of academic achievement or aptitude, but there are demographic reasons why the attainment profiles of different schools vary considerably. In addition, government initiatives such as the City Technology Colleges and Specialist schools programmes have made the comprehensive ideal less certain.

In these schools children could be selected on the basis of curriculum aptitude related to the school's specialism even though the schools do take quotas from each quartile of the attainment range to ensure they were not selective by attainment. A problem with this is whether the quotas should be taken from a normal distribution or from the specific distribution of attainment in the immediate catchment area. In the selective school system, which survives in several parts of the United Kingdom, admission is dependent on selection criteria, most commonly a cognitive test or tests. Although comprehensive schools were introduced to England and Wales in 1965, there are 164 selective grammar schools that are still in operation.[citation needed] (though this is a small number compared to approximately 3500 state secondary schools in England). Most comprehensives are secondary schools for children between the ages of 11 to 16, but in a few areas there are comprehensive middle schools, and in some places the secondary level is divided into two, for students aged 11 to 14 and those aged 14 to 18, roughly corresponding to the US middle school (or junior high school) and high school, respectively. With the advent of key stages in the National Curriculum some local authorities reverted from the Middle School system to 11–16 and 11–18 schools so that the transition between schools corresponds to the end of one key stage and the start of another.

In principle, comprehensive schools were conceived as "neighbourhood" schools for all students in a specified catchment area. Current education reforms with Academies Programme, Free Schools and University Technical Colleges will no doubt have some impact on the comprehensive ideal but it is too early to say to what degree. 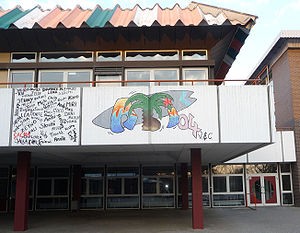 The comprehensive school of Ludwigshafen-Oggersheim

Germany has a comprehensive school known as the Gesamtschule. While some German schools such as the Gymnasium and the Realschule have rather strict entrance requirements, the Gesamtschule does not have such requirements. They offer college preparatory classes for the students who are doing well, general education classes for average students, and remedial courses for those who aren't doing that well. In most cases students attending a Gesamtschule may graduate with the Hauptschulabschluss, the Realschulabschluss or the Abitur depending on how well they did in school.

Starting in 2010/2011, Hauptschulen were merged with Realschulen and Gesamtschulen to form a new type of comprehensive school in the German States of Berlin and Hamburg, called Stadtteilschule in Hamburg and Sekundarschule in Berlin (see: Education in Berlin, Education in Hamburg).

Comprehensive schools that do not offer college preparatory classes

The "Mittelschule" is a school in some States of Germany that offers regular classes and remedial classes but no college preparatory classes. In some States of Germany, the Hauptschule does not exist, and any student who has not been accepted by another school has to attend the Mittelschule. Students may be awarded the Hauptschulabschluss or the Mittlere Reife but not the Abitur. 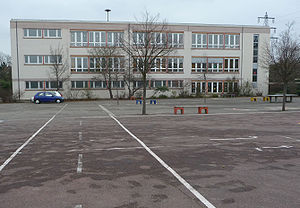 Comprehensive schools have been accused of grade inflation after a study revealed that Gymnasium senior students of average mathematical ability[2] found themselves at the very bottom of their class and had an average grade of "Five", which means "Failed". Gesamtschule senior students of average mathematical ability found themselves in the upper half of their class and had an average grade of "Three Plus".[3] When a central Abitur examination was established in the State of North Rhine-Westphalia, it was revealed that Gesamtschule students did worse than could be predicted by their grades or class rank. Barbara Sommer (Christian Democratic Union), Education Minister of North Rhine-Westphalia, commented that: Looking at the performance gap between comprehensives and the Gymnasium [at the Abitur central examination] [...] it is difficult to understand why the Social Democratic Party of Germany wants to do away with the Gymnasium. [...] The comprehensives do not help students achieve [...] I am sick and tired of the comprehensive schools blaming their problems on the social class origins of their students. What kind of attitude is this to blame their own students? She also called the Abitur awarded by the Gymnasium the true Abitur and the Abitur awarded by the Gesamtschule "Abitur light".[4] As a reaction, Sigrid Beer (Alliance '90/The Greens) stated that comprehensives were structurally discriminated against by the government, which favoured the Gymnasiums. She also said that many of the students awarded the Abitur by the comprehensives came from "underprivileged groups" and sneering at their performance was a "piece of impudence".[5]

According to Kurt A. Heller:

According to Ulrich Sprenger:

As the proponents of comprehensives invariably demand humanization of schools, it is very disappointing that socially disadvantaged students, who are most desperately in need of a process of humanization, obviously benefit the least from the structural innovations brought about by the integrated comprehensive system, the organisational and curricular changes of which were primarily aimed at promoting and providing special assistance to this very group of students.

Comprehensive schools were introduced into Ireland in 1966 by an initiative by Patrick Hillery, Minister for Education, to give a broader range of education compared to that of the vocational school system, which was then the only system of schools completely controlled by the state. Until then, education in Ireland was largely dominated by religious persuasion, particularly the voluntary secondary school system was a particular realisation of this. The comprehensive school system is still relatively small and to an extent has been superseded by the community school concept. The Irish word for a comprehensive school is a 'scoil chuimsitheach.'

In Ireland comprehensive schools were an earlier model of state schools, introduced in the late 1960s and largely replaced by the secular community model of the 1970s. The comprehensive model generally incorporated older schools that were under Roman Catholic or Protestant ownership, and the various denominations still manage the school as patrons or trustees. The state owns the school property, which is vested in the trustees in perpetuity. The model was adopted to make state schools more acceptable to a largely conservative society of the time.

Sweden had used mixed-ability schools for some years before they were introduced into England and Wales, and was chosen as one of the models.

The largest expansion of comprehensive schools in 1965 resulted from a policy decision taken in 1965 by Anthony Crosland, Secretary of State for Education in the 1964–1970 Labour government. The policy decision was implemented by Circular 10/65, an instruction to local education authorities to plan for conversion. Students sat the 11+ examination in their last year of primary education and were sent to one of a secondary modern, secondary technical or grammar school depending on their perceived ability. Secondary technical schools were never widely implemented and for 20 years there was a virtual bipartite system which saw fierce competition for the available grammar school places, which varied between 15% and 25% of total secondary places, depending on location.[citation needed]

In 1970 Margaret Thatcher became Secretary of State for Education of the new Conservative government. She ended the compulsion on local authorities to convert, however, many local authorities were so far down the path that it would have been prohibitively expensive to attempt to reverse the process, and more comprehensive schools were established under Mrs Thatcher than any other education secretary.

By 1975 the majority of local authorities in England and Wales had abandoned the 11-plus examination and moved to a comprehensive system. Over that 10-year period many secondary modern schools and grammar schools were amalgamated to form large neighbourhood comprehensives, whilst a number of new schools were built to accommodate a growing school population. By the mid-1970s the system had been almost fully implemented.

In 1976 the future Labour prime minister James Callaghan launched what became known as the 'great debate' on the education system. He went on to list the areas he felt needed closest scrutiny: the case for a core curriculum, the validity and use of informal teaching methods, the role of school inspection and the future of the examination system. Comprehensive school remains the most common type of state secondary school in England, and the only type in Wales. They account for around 90% of pupils, or 64% if one does not count schools with low-level selection. This figure varies by region.

Since the 1988 Education Reform Act, parents have a right to choose which school their child should go to or whether to not send them to school at all and to home educate them instead. The concept of "school choice" introduces the idea of competition between state schools, a fundamental change to the original "neighbourhood comprehensive" model, and is partly intended as a means by which schools that are perceived to be inferior are forced either to improve or, if hardly anyone wants to go there, to close down. Government policy is currently promoting 'specialisation' whereby parents choose a secondary school appropriate for their child's interests and skills. Most initiatives focus on parental choice and information, implementing a pseudo-market incentive to encourage better schools. This logic has underpinned the controversial league tables of school performance.

Scotland has a very different educational system from England and Wales, though also based on comprehensive education. It has different ages of transfer, different examinations and a different philosophy of choice and provision. All publicly funded primary and secondary schools are comprehensive. The Scottish Government has rejected plans for specialist schools as of 2005.

Education in Northern Ireland differs slightly from systems used elsewhere in the United Kingdom, but it is more similar to that used in England and Wales than it is to Scotland.