The Comtat Venaissin (Provençal: lou Coumtat Venessin, Mistralian norm: la Coumtat, classical norm: lo Comtat Venaicin; "County of Venaissin"), often called the Comtat for short, was a part of the Papal States in what is now the Provence-Alpes-Côte d'Azur region of France.

The entire region was an enclave within the Kingdom of France, comprising the area around the city of Avignon (itself always a separate comtat) roughly between the Rhône, the Durance and Mont Ventoux, and a small exclave located to the north around the town of Valréas bought by Pope John XXII. The Comtat also bordered (and mostly surrounded) the Principality of Orange. The region is still known informally as the Comtat Venaissin, although this no longer has any political meaning.

In 1096, the Comtat was part of the Margraviate of Provence that was inherited by Raymond IV, Count of Toulouse from William Bertrand of Provence. These lands in the Holy Roman Empire belonged to Joan, Countess of Toulouse, and her husband, Alphonse, Count of Poitiers.[1] Alphonse bequeathed it to the Holy See on his death in 1271. Since this happened during an interregnum, there was no Holy Roman Emperor to protect Joan's rights.

The Comtat became a Papal territory in 1274. The region was named after its former capital, Venasque, which was replaced as capital by Carpentras in 1320. 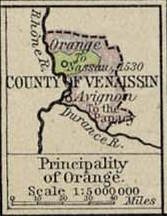 Map showing the Comtat and the Principality of Orange in 1547

Avignon was sold to the papacy by Joanna I, Queen of Naples and Countess of Provence, in 1348, whereupon the two comtats were joined together to form a unified papal enclave (though retaining their separate political identities).

The enclave's inhabitants did not pay taxes and were not subject to military service, making life in the Comtat considerably more attractive than under the French Crown. It became a haven for French Jews, who received better treatment under papal rule than in the rest of France. The Carpentras synagogue, built in the 14th century, is the oldest in France, and until the French Revolution preserved a distinctive Provençal ritual.

Successive French rulers sought to annex the region to France. It was invaded by French troops in 1663, 1668 and 1768–74 during disputes between the Crown and the Church. It was also subjected to trade and customs restrictions during the reigns of Louis XIV and Louis XV.

Papal control continued until 1791, when an unauthorized plebiscite was held and the inhabitants voted for annexation by France. A few years later, Vaucluse département was created based on Comtat Venaissin including the exclave of Valréas and a part of the Luberon for the southern half. The papacy did not recognise this formally until 1814.