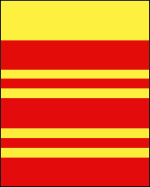 Banner of Conan IV of the House of Penthievre

Conan IV of Penthièvre (1138 – February 20, 1171), (Breton: Konan V Penteur, and Konan Breizh) called "the Young", was duke of Brittany, from 1156 to 1166. He was the son of Alan the Black, 1st Earl of Richmond and Bertha of Brittany. Conan IV was his father's heir as 2nd Earl of Richmond and his mother's heir as Duke of Brittany.[lower-alpha 1] From his father's side, Conan was great great grandson of duke Geoffrey I and great grandson of Odo of Brittany.[1] Conan and his daughter Constance would be the only representatives of the Penthièvre dynasty of Brittany to hold the Duchy's crown.

With the death of his mother Bertha in early 1156, Conan IV expected to inherit the ducal throne.[1] However, he was denied his inheritance by his stepfather Odo II, who refused to relinquish authority. Odo may have entered into a pact with Hoel, Count of Nantes, to divide Brittany between them. But Hoel was under threat of rebellion in Nantes, sponsored by Geoffrey VI, Count of Anjou, and he could not send Eudas any aid. Within the year Conan IV was able to capture and imprison Eudas, and claim his inheritance.[1]

Conan also inherited the title Earl of Richmond from his father Alan. According to the English Heritage website for Richmond Castle, the ancestral home of the Earls of Richmond, the inheritance of both the Earldom and the Duchy "meant that he was subject to both the King of England and the King of France."[lower-alpha 2]

Henry II of England attempted to obtain control of the Duchy of Brittany, which neighboured his lands and had traditionally been largely independent from the rest of France, with its own language and culture.[2] The Breton dukes held little power across most of the duchy, which was mostly controlled by local lords.[3] In 1148, Duke Conan III died and civil war broke out.[4] Henry claimed to be the overlord of Brittany, on the basis that the duchy had owed loyalty to Henry I, and saw controlling the duchy both as a way of securing his other French territories and as a potential inheritance for one of his sons.[5][lower-alpha 3] Initially Henry's strategy was to rule indirectly through proxies, and accordingly Henry supported Conan IV's claims over most of the duchy, partly because Conan had strong English ties and could be easily influenced.[7] Conan's uncle, Hoël, continued to control the county of Nantes in the east until he was deposed in 1156 by Henry's brother, Geoffrey, possibly with Henry's support.[8]

When Geoffrey of Anjou[lower-alpha 4] died in 1158, Conan attempted to reclaim Nantes but was opposed by Henry who annexed it for himself.[9] Louis took no action to intervene as Henry steadily increased his power in Brittany.[10] Conan's control of Nantes had the effect of reuniting Brittany. Henry II, responded by seizing the Earldom of Richmond, Conan's paternal inheritance, and demanded the return of Nantes. Conan and Henry made peace, and Conan married Henry's cousin, Margaret of Huntingdon, in 1160.[1] Margaret was the sister of William the Lion, King of Scots.

Conan faced several revolts from his own nobles, rebellions possibly covertly supported by England. To put down the unrest, the Duke appealed for help to Henry II, who, in return, demanded the betrothal of Conan’s only daughter and heiress Constance to Henry's son Geoffrey II, Duke of Brittany.[11]

While these local Breton nobles began to rebel against Conan IV, Henry had begun to alter his policy of indirect rule in Brittany and started to exert more direct control.[12] In 1164 Henry intervened to seize lands along the border of Brittany and Normandy, and in 1166 invaded Brittany to punish the local barons.[13] Henry then forced Conan to abdicate as duke and to give Brittany to his daughter Constance[lower-alpha 5]; Conan also betrothed Constance to Henry's son Geoffrey.[13] This arrangement was quite unusual in terms of medieval law, as Conan might have had sons who could have legitimately inherited the duchy.[lower-alpha 6] [14]

Conan IV married Margaret of Huntingdon, sister of the Scottish kings Malcolm IV and William I.

They had at least four children:

According to the histories that record the abdication of Conan IV, he died in 1171 sometime after his abdication.

Henry II had claimed to be Overlord of Brittany, as would his son Richard the Lionheart. Henry never claimed the Dukedom of Brittany. After Conan IV abdicated, Henry II held guardianship over Brittany for Conan's daughter Constance, until such time as Henry II's fourth legitimate son, Geoffrey Plantagenet, could marry her. While the Dukedom of Brittany would remain in Conan IV's line through Constance, Geoffrey would not allow Constance any authority as Duchess suo jure, and ruled Brittany directly as Duke jure uxoris until his death.