pronunciation (help·info)) is a Chilean city and commune belonging to the metropolitan area of Greater Concepción, its one of the largest urban conurbations of Chile.[2] It has a significant impact on domestic trade[3] being part of the region with most industrialization of the country[4] and politically it has the second majority of representatives in the National Congress of Chile.[5] Its location is in the called Zona Centro Sur (Central South Zone), in the geographic center of the country,[6] and it is the capital of the Concepción Province and VIII Bío Bío Region. 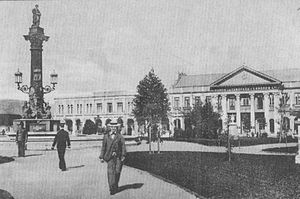 Concepción was founded by Pedro de Valdivia[FN 1] in 1550 north of the Bío Bío River, at the site which is today known as Penco. At that time it was given the name Concepción del Nuevo Extremo. The new settlement of Concepción was just a few kilometers north of La Frontera (The Frontier), the boundary between Spanish territory and the land of the Mapuche, an American Indian ethnic group that remained independent until the 1870s. The settlement was formally recognized by the Spanish authorities as a town two years later by a royal decree. It was given a coat-of-arms that is still in use today.

Although Concepción was a significant military settlement for the Captaincy-General of Chile, it was overrun and destroyed by Mapuche armies in 1554, and once again after being refounded in 1555. Concepción was restored during the governorship of García Hurtado de Mendoza when he landed there and built a fort on the Alto de Pinto in 1557. The town was refounded once more on January 6, 1558, by captain Jerónimo de Villegas. It became the headquarters of the military forces engaged against the Mapuche in La Araucanía over the next two centuries, growing to a population of 10,000 despite a siege in 1564 and other attacks by the Mapuche. Concepción was the home of the Real Audiencia from 1565 to 1575.

The new site for the town of Concepción became the main town of the Intendancy of Concepción, whose jurisdiction extended from the Maule River to La Frontera. The first Intendant of Concepción was the Irishman Ambrose O'Higgins, Marquis of Osorno, who later became Royal Governor of Chile and Viceroy of Peru.

When the First National Government Board met in Santiago on September 18, 1810, citizens of Concepción joined up. Concepción was used as the point of entry by the Spanish Army in the attempt by the Viceroyalty of Peru to re-conquer Chile. Concepción politicians and soldiers became a significant political force in the newly independent country.

On January 1, 1818, Ambrose O'Higgins's son, Bernardo O'Higgins, proclaimed and took the oath of the Chilean War of Independence in the main square of Concepción, which since then has been known as "Plaza de la Independencia". On February 20, 1835, the town again was largely destroyed by an earthquake and had to be rebuilt.

As of 2010, Concepción is the second largest city of Chile. The Universidad de Concepción, founded in 1919, became the first secular private university in Chile. The neighboring harbor of Talcahuano is the site of the largest naval base in Chile. 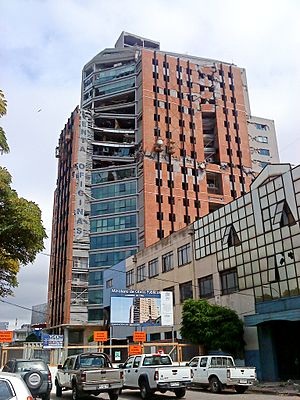 On February 27, 2010, an 8.8 magnitude earthquake struck the city of Concepción, killing more than 521 people and injuring thousands nationwide. Following the earthquake, geologists relying on global positioning satellite (GPS) data concluded that the city had been displaced roughly 3 meters (9.8 feet) to the west as a result of the event.[8] Fortunately, the city avoided the tsunami that followed the earthquake.[9]

After the 2010 Chile earthquake, a prison riot began in Concepción's El Manzano prison following a failed escape attempt by the internees. Different parts of the prison were set on fire and the riot was controlled only after the guards shot into the air and received help from military units.[10] As of 5 March 2010, a Peruvian field hospital has been deployed to the city.[11]

Concepción is known as "the university city"[12][13] thanks to the numerous universities within the urban agglomeration,[14] since one of the most important universities of the country were founded here, such as the Universidad de Concepción, Universidad Católica de la Santísima Concepción and Universidad del Biobío. This city also has numerous headquarters for many other universities. In addition, this metropolis has a large educational offer, focused on institutes, centers of technical formation and the universities already mentioned above. 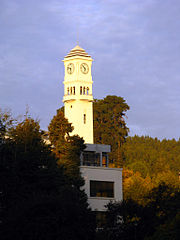 The campanile of the Universidad de Concepción

The University Pencopolitana whose name was Pontificia Universidad Pencopolitana de La Concepción (Pontifical Pencopolitana University of The Conception) was an old university founded though a decree of the Bishop of Concepción, delivered to the administration of the Society of Jesus which functioned between the years 1724 and 1767. In May 24 of 1751 an earthquake followed by a tsunami, ravaged the city causing serious damage, including the destruction of the library of the University and all of its funds. As a product of the fury of the watersw, a rich collection of texts of the governance of southern Chile were lost, which resulted in a disaster for the culture and collective memory of the city. Due to the natural disasters, it was decided to relocate the city to the called Valle de la Mocha, location which currently holds. Slowly the seminar was revived in the new location, in a period of decline of academic activity in Chilean monastic universities after the creation of the Universidad de San Felipe, and even came to confer some degree before the Suppression of the Society of Jesus in 1767. The aforementioned University is considered to be the natural and legitimate predecessor of the Universidad Católica de la Santísima Concepción (UCSC), erected by the Archbishop of Concepción in 1991, from the Talcahuano Regional Headquarters of the Pontificia Universidad Católica de Chile.

The image of the Pontifical University of Concepción Pencopolitana, is still valid, for His Majesty King Juan Carlos I of Spain in his 1990 speech on the occasion of his inauguration as Doctor Honoris Causa in the University of Chile, in Santiago de Chile, said: "The work of the Pontifical University Pencopolitana should not be ignored, even before the creation of the University of San Felipe" (Juan Carlos's account fails to acknowledge the existence of San Felipe's predecessor, the Dominican Universidad de Santo Tomás de Aquino, from the sixteenth century in Santiago).

Meanwhile, the University of Chile imparted into one of the schools in the city, a course of law, which allowed to obtain a law degree. Among his students was Henry Urrutia Manzano, who decades later occupied the presidency of the Supreme Court of Chile.

Already in the twentieth century, the Universidad de Concepción was created, founded in 1919 by a group of citizens including Enrique Molina Garmendia, its first rector.

The city has a French international school, the Lycée Français Charles de Gaulle.

The climate of Concepción is classified as Köppen Csb, with a dry summer nadir in February. The cool waters of the Pacific Ocean help to maintain mild temperatures throughout the year. Temperatures rarely exceed 30 °C (86 °F) or fall below 0 °C (32.0 °F). In the six-month period between May and October, the city receives approximately 83% of its total annual precipitation, which totals 1,130 mm (44 in). The wettest month since records began in 1912 was June 2000 with 565.7 millimetres (22.3 in), whilst all months from November to April have been rainless on occasions.[15] The maritime cooling brings much cooler temperatures than nearby inland areas on the same parallel in Argentina, where average summer highs match Concepción's all-time records. Summer temperatures for the 36 parallel are rarely as cool as they are in Concepción, and on the East Coast of Argentina, similar or hotter summer temperatures are found much further from the equator. However, this moderation is evident for the entire Chilean Pacific so is not unique for Concepción. Similar cool-summer mediterranean climate tendencies are found on the West Coast of North America on similar parallels, even though Concepción tends to have slightly wetter summers than San Francisco for example.

As might be expected for such a large urban area heavily dependent on wood-burning for heat and diesel for transport, the air in Concepción is the third-most polluted in Chile, after Santiago and Temuco.[18]

Between 1970 and 1982 there is a large increase in the population. One reason is the inclusion of San Pedro, segregated from the municipality of Coronel.

The Concepción commune population declined sharply because in 1996 it was divided, creating Chiguayante and San Pedro de la Paz. In these communes the population has grown quickly since they have become bedroom communities of Concepción, i.e. residential cities that do not have a center with many shops, such as Concepcion.

There is a significant percentage of foreign residents in the city, the most numerous are the Spanish, Italian and U.S. expatriate communities. There are also smaller segments of German, French, British, Dutch, Greek, Portuguese, Croatian, Scandinavian, Arab and Australian descendants in a city settled by waves of immigration. 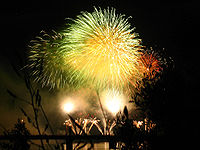 Fireworks in celebration for the arrival of 2007 in Concepción

The Los Tres band was born in the city of Concepción

Concepción is considered to be the "capital of Chilean rock", since numerous bands of this genre have been founded in this city, such as the internationally recognized bands Los Tres and Los Bunkers, and the now missing Emociones Clandestinas and Santos Dumont, or heavier rock bands such as Machuca. Also, known musicians have declared that their first massive presentations have been in this city, as is the case of Los Prisioneros.[21]

Concepción is also known as "the university city", for the number of universities that exist and which also represent an alternative to various regions of Chile. This is why there is a feedback effect in Concepción, due to that the city is formed by many young adults coming from other places of Chile. This makes the city to be characterized by a youth culture such as music, art, social demands, etc.

Basketball is also played at a high professional level. The most notable team is: 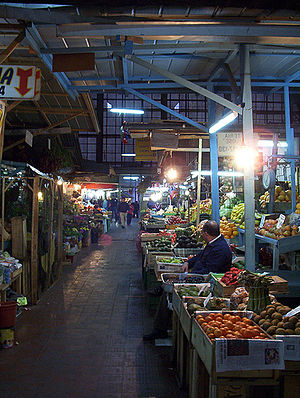 Concepción is the second commercial nucleus of Chile. In the image, the Concepción Central Market

Historically characterized by a strong manufacturing industry, Concepión has also been a major center for distribution and services and the financial basis of the regional economy.

Trade in the city is concentrated in the Plaza Independencia (Independence Square), the pedestrian street Alonso de Ercilla y Zúñiga (built in 1981), and along the major avenues. One such avenue is the Diego Barros Arana street which has developed into the commercial center of the city and the region was until 1907 even known as "calle Comercio" ("Commerce Street"). New commercial centers are being developed around the old central station and the new civic district as a part of the Chilean bicentennial (September 18, 2010). A considerable percentage of local trade is taking place in settlements around the city, in communes such as Hualpén, Talcahuano and San Pedro de la Paz, where there are bustling shopping centers, such as Mall Plaza del Trébol, and where there is a constant commercial development. 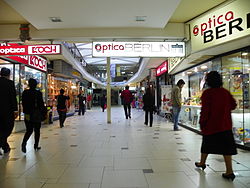 Inside the University Gallery

As a commune, Concepción is a third-level administrative division of Chile administered by a municipal council, headed by an alcalde who is directly elected every four years. The municipal building (alcaldía) is located at O'Higgins Nº 525 Lua error in Module:Coordinates at line 668: callParserFunction: function "#coordinates" was not found..[22] The 2012-2016 alcalde is Alvaro Ortiz Vera (DC). The communal council has the following members:[1]

Within the electoral divisions of Chile, Concepción is represented in the Chamber of Deputies by José Miguel Ortiz (PDC) and Enrique Van Rysselberghe (UDI) as part of the 44th electoral district, (together with San Pedro de la Paz and Chiguayante). The commune is represented in the Senate by Alejandro Navarro Brain (MAS) and Hosain Sabag Castillo (PDC) as part of the 12th senatorial constituency (Biobío-Costa).

About eight or nine cities have sister city associations.