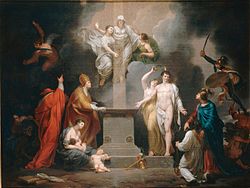 Allegory of the Concordat of 1801, by Pierre Joseph Célestin François 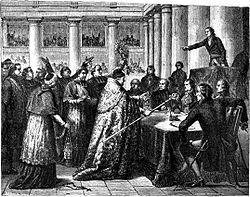 Leaders of the Catholic Church taking the civil oath required by the Concordat.

The Concordat of 1801 was an agreement between Napoleon and Pope Pius VII, signed on 15 July 1801 in Paris.[1] It remained in effect until 1905. It sought national reconciliation between revolutionaries and Catholics and solidified the Roman Catholic Church as the majority church of France, with most of its civil status restored. The hostility of devout Catholics against the state had now largely been resolved. It did not restore the vast church lands and endowments that had been seized during the revolution and sold off. Catholic clergy returned from exile, or from hiding, and resume their traditional positions in their traditional churches. Very few parishes continued the priests who had accepted the "Civil Constitution of the Clergy". While the Concordat restored much power to the papacy, the balance of church-state relations tilted firmly in Napoleon's favour. He selected the bishops and supervised church finances.[2][3]

Napoleon and the pope both found the Concordat useful. Similar arrangements were made with the Church in territories controlled by Napoleon, especially Italy and Germany.[4]

During the French Revolution, the National Assembly had taken Church properties and issued the Civil Constitution of the Clergy, which made the Church a department of the State, effectively removing it from papal authority. At the time, the nationalized Gallican Church was the official church of France, but it was essentially Catholicism. The Civil Constitution caused hostility among the Vendeans towards the change in the relationship between the Catholic Church and the French government. Subsequent laws abolished the traditional Gregorian calendar and Christian holidays.[5]

The Concordat was drawn up by a commission with three representatives from each party. Napoleon appointed Joseph Bonaparte, his brother, Emmanuel Crétet, a counselor of state, and Étienne-Alexandre Bernier, a doctor in theology. Pope Pius VII appointed Cardinal Ercole Consalvi, Cardinal Giuseppe Spina, archbishop of Corinth, and his theological adviser, Father Carlo Francesco Maria Caselli.[6] The French bishops, whether still abroad or returned to their own country, had no part in the negotiations. The concordat as finally arranged practically ignored them.[7]

While the Concordat restored some ties to the papacy, it was largely in favor of the state; the balance of church-state relations had tilted firmly in Napoleon's favor. He understood the utility of religion as an important factor of social cohesion. His was a utilitarian approach.[8] He could now win favor with French Catholics while also controlling Rome in a political sense. Napoleon once told his brother Lucien in April 1801, "Skillful conquerors have not got entangled with priests. They can both contain them and use them."[9] As a part of the Concordat, he presented another set of laws called the Organic Articles.

Napoleon looked for the recognition by the Church of the disposition of its property and geographical reorganization of bishoprics, while Rome sought the protection of Catholics and the recognition of a special status of the Catholic Church in the French State.[8] The main terms of the Concordat of 1801 between France and Pope Pius VII included:

According to Georges Goyau, the law known as "The Organic Articles", promulgated in April, 1802, infringed in various ways infringed on the spirit of the concordat.[7]

The Concordat was abrogated by the law of 1905 on the separation of Church and state. However, some provisions of the Concordat are still in effect in the Alsace-Lorraine region under the local law of Alsace-Moselle, as the region was controlled by the German Empire at the time of the 1905 law's passage.