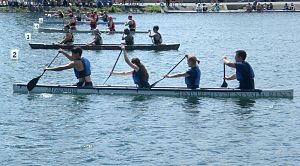 A concrete canoe is a canoe made of concrete, typically created for an engineering competition.

In spirit, the event is similar to that of a cardboard boat race—make the seemingly unfloatable float. However, since concrete and other poured surfaces are an integral part of a civil engineer's education, concrete canoes typically feature more development than cardboard boats.

Ignoring hydrodynamic effects, all ships or boats float because the weight of the water they displace is equal to the weight of the boat (Archimedes' principle). However, many boats are made of materials that are denser than water, meaning that the boat will sink if filled with water. Although it is not required by the rules of the competition, some competitive concrete canoes have concrete mix designs that are less dense than water. They must pass a test in which the canoe is filled with water and pushed below the surface; the canoe must then resurface in order to qualify for racing. This is possible because, unlike normal concrete which uses sand and small rocks, concrete canoes are created with porous aggregates such as Macrolite and microspheres. However, because many teams still design their concrete mixes to be denser than water, in the United States, teams are allowed to insert concrete-covered, non-structural foam pieces in their canoes to make the canoes float after being submerged.

The ASCE (American Society of Civil Engineers) National Concrete Canoe Competition (NCCC) provides students with a practical application of the engineering principles they learn in the classroom, along with important team and project management skills they will need in their careers. The event challenges the students' knowledge, creativity and stamina, while showcasing the versatility and durability of concrete as a building material.

The winners of the ASCE National Concrete Canoe Competition are determined by compiling the team's total number of points from the academic and race portions of the competition. Academic scholarships totaling $9,000 are awarded to the winning teams' undergraduate civil engineering program.

The history of Concrete Canoe in the United States actually began in the 1960s, when a small number of ASCE student chapters began holding intramural Concrete Canoe races. Then, in the 1971, the University of Illinois at Urbana-Champaign held the first intercollegiate race against Purdue. In the more than 30 years since, the students’ efforts to combine engineering excellence and hydrodynamic design to construct water-worthy canoes have culminated in an advanced form of concrete construction and racing technique known as the “America’s Cup of Civil Engineering.”

In 1981 as part of the FIP congress in Stockholm, Sweden there was the 1st FIP international concrete canoe race.[1] won by the Danish team from Technical University of Denmark.[2] inspired by Herbert Krenchel

In 1988, ASCE expanded the competition to the national level, when Master Builders, Inc. (now known as BASF) signed-on to become the sole corporate sponsor for the event. In its first year, 18 teams of enthusiastic civil engineering students from the nation’s premier academic programs gathered in East Lansing, Mich., to test the waters of this innovative and educational event. Over the next two decades, the competition became a great success, with regional winners traveling across the country by plane, train and Ryder truck, canoes in tow, in their quest to become National Concrete Canoe Competition champions.

As competition was developing in the United States, the idea had also taken hold in other countries. Today, concrete canoe racing happens around the world in places like Germany, South Africa, Canada, Japan and the United Arab Emirates; and with sponsorship from ASCE and the American Concrete Institute (ACI), the 2007 National Concrete Canoe Competition winning team, University of Wisconsin - Madison, travelled to the Netherlands to represent the United States in the 30th Annual Dutch Concrete Canoe Challenge.

The Concrete Canoe Competition is designed to provide civil engineering students with an opportunity to gain hands-on, practical experience and leadership skills by working with concrete mix designs and project management. Organizers, sponsors and participants are dedicated to building awareness of concrete technology and application, as well as the versatility and durability of concrete as a construction material, among civil engineering students, educators, practitioners, the concrete industry and the general public. They also strive to increase awareness among industry leaders, opinion makers and the general public of civil engineering as a dynamic and innovative profession essential to society. In its 21-year history, the National Concrete Canoe Competition has challenged the knowledge, creativity and stamina of more than 400 teams and 5000 students. In 2008, more than 200 teams competed in 18 conference competitions to qualify for participation at the national level.

The 2014 National Concrete Canoe Competition (NCCC) was hosted by the University of Pittsburgh at Johnstown and held on its campus in Richland Township and at the Quemahoning Recreation Area near Johnstown, Pennsylvania. Nevada Reno won their second national title, Cal Poly - SLO finished second followed by the Universite Laval in third, and Utah State finished fourth with Wisconsin - Madison in fifth.[3]

The 2013 National Concrete Canoe Competition was held in Urbana-Champaign, Illinois. École de Technologie Supérieure, Montréal took first place overall, followed by the University of Nevada, Reno in second and University of Florida in third. Notice that École de Technologie Supérieure is the first non American team who bring the first place home in the history of the competition (26th year).

The 2009 National Concrete Canoe Competition was held in Tuscaloosa, Alabama. The University of California, Berkeley took first place, their first win since 1992 and fifth national title.

Teams of engineering students will gather for a weekend designed to be both challenging and fun. Twenty-five percent of each team’s total team score will be based on the engineering design and construction principles used in the creation of their concrete canoe; 25 percent will be based on a technical design report detailing the planning, development, testing and construction of their canoe; and 25 percent will be based on a formal business presentation highlighting the canoe’s design, construction, racing ability and other innovative features. The remaining 25 percent of each team’s score is based on the performance of the canoe and the paddlers in five different race events: men’s and women’s slalom/endurance races, and men’s, women’s and co-ed sprint races.

For the purpose of the competition, concrete is defined as a mixture of cement, of which at least 30% (by mass) must be portland cement, and aggregate, which must constitute at least 25% (by volume) of the mix. The aggregate need not be conventional construction aggregate (sand, etc.), but may include materials such as hollow glass beads and fibers. Epoxy is not permitted. Up to 50% of the thickness of the canoe may be a reinforcement mesh.

Concrete canoe teams must design their canoes from scratch. Typically they create the shape of the hull with a computer design program specifically made for yachts, canoes, and other watercraft. The shape is optimized for racing. This hull shape is then given to a construction team, responsible for making a mold for the canoe to be formed on. A special concrete mix is designed over several months, emphasizing among other qualities, an optimal balance between strength and low density. The finalized mix design is placed on the form; the hull thickness usually ranges from about 3/8" to 3/4". Teams later spend hundreds of hours sanding and applying exterior graphics to their canoes for a nice finish. Scoring in the competition is based on the quality of construction, race performance, a design paper, and a business presentation.

Concrete Canoe competitions have a significant following from both present and past competitors. The concrete canoe community now includes a dedicated concrete canoe news website, ConcreteCanoe.org, which follows comptetitions around the world, as well as Concrete Canoe Magazine, which publishes scientific papers, studies, and articles written on the techniques used by top teams.