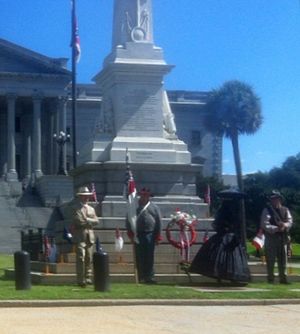 Confederate Memorial Day, also known as Confederate Decoration Day (Tennessee) and Confederate Heroes Day (Texas), is an official holiday or observance day in a number of states in the Southern United States as a day to honor those who died fighting for the Confederate States of America during the American Civil War.

In the spring of 1866 the Ladies Memorial Association of Columbus, Georgia passed a resolution to set aside one day annually to memorialize the Confederate dead. Additionally, the secretary of the association, Mrs. Charles J. (Mary Ann) Williams was directed to author a letter inviting the ladies in every Southern state to join them in the observance.[1] The letter was written in March 1866 and sent to all of the principal cities in the South, including Atlanta, Macon, Montgomery, Memphis, Richmond, St. Louis, Alexandria, Columbia, New Orleans, et al.

The date for the holiday was selected by Mrs. Elizabeth "Lizzie" Rutherford Ellis.[2] She chose April 26, the first anniversary of Confederate General Johnston's final surrender to Union General Sherman at Bennett Place, NC. For many in the South, that marked the official end of the Civil War.[1]

In 1868, General John A. Logan, who was the commander in chief of the Union Civil War Veterans Fraternity called the Grand Army of the Republic (GAR), launched the Memorial Day holiday that is currently observed in the entire United States. According to General Logan's wife, he emulated the practices of Confederate Memorial Day. She wrote that Logan "said it was not too late for the Union men of the nation to follow the example of the people of the South in perpetuating the memory of their friends who had died for the cause they thought just and right."[3]