Confederation of the Rhine

The members of the confederation were German princes (Fürsten) from the Holy Roman Empire. They were later joined by 19 others, all together ruling a total of over 15 million subjects providing a significant strategic advantage to the French Empire on its eastern front. Prussia and Austria were not members.

Napoleon sought to consolidate the modernizing achievements of the revolution, but he wanted the soldiers and supplies these subject states could provide for his wars. Napoleon required it to supply 63,000 troops to his army. The success of the Confederation depended on Napoleon's success in battle; it collapsed when he lost the Battle of Leipzig in 1813.

On 12 July 1806, on signing the Treaty of the Confederation of the Rhine (German: Rheinbundakte) in Paris, 16 states in present-day Germany joined together in a confederation (the treaty called it the états confédérés du Rhinelande, with a precursor in the League of the Rhine).[2] Napoleon was its "protector". On 1 August, the members of the confederation formally seceded from the Holy Roman Empire, and on 6 August, following an ultimatum by Napoleon, Francis II declared the Holy Roman Empire dissolved. Francis and his Habsburg dynasty continued as emperors of Austria.

According to the treaty, the confederation was to be run by common constitutional bodies, but the individual states (in particular the larger ones) wanted unlimited sovereignty.[1] Instead of a monarchical head of state, as the Holy Roman Emperor had had, its highest office was held by Karl Theodor von Dalberg, the former Arch Chancellor, who now bore the title of a Prince-Primate of the confederation. As such, he was President of the College of Kings and presided over the Diet of the Confederation, designed to be a parliament-like body although it never actually assembled.[1] The President of the Council of the Princes was the Prince of Nassau-Usingen.

In return for their support of Napoleon, some rulers were given higher statuses: Baden, Hesse, Cleves, and Berg were made into grand duchies, and Württemberg and Bavaria became kingdoms. States were also made larger by incorporating the many smaller "Kleinstaaten", or small former imperial member states. They had to pay a very high price for their new status, however. The Confederation was above all a military alliance: the members had to maintain substantial armies for mutual defense and supply France with large numbers of military personnel. As events played out the members of the confederation found themselves more subordinated to Napoleon than they had been to the Habsburgs.[3]

After Prussia lost to France in 1806, Napoleon cajoled most of the secondary states of Germany into the Confederation of the Rhine. Eventually, an additional 23 German states joined the Confederation. It was at its largest in 1808, when it included 36 states—four kingdoms, five grand duchies, 13 duchies, seventeen principalities, and the Free Hansa towns of Hamburg, Lübeck, and Bremen.[1] Only Austria, Prussia, Danish Holstein, and Swedish Pomerania stayed outside, not counting the west bank of the Rhine and the Principality of Erfurt, which were annexed by the French empire.

In 1810 large parts of what is now northwest Germany were quickly annexed to France in order to better monitor the trade embargo with Great Britain, the Continental System.

The Confederation of the Rhine collapsed in 1813, in the aftermath of Napoleon's failed campaign against the Russian Empire. Many of its members changed sides after the Battle of Leipzig, when it became apparent Napoleon would lose the War of the Sixth Coalition.

The following table shows the members of the confederation, with their date of joining, as well as the number of troops provided, listed in parentheses.[4] 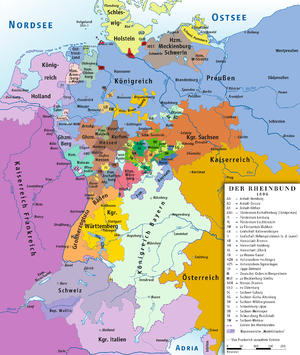 Member states of the Confederation of the Rhine, 1806. 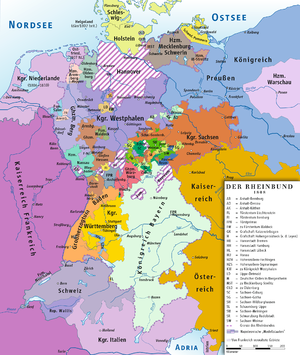 Member states of the Confederation of the Rhine, 1808. 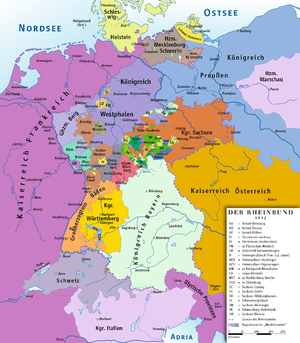 Member states of the Confederation of the Rhine, 1812.

The College of Kings

The College of Princes

The allies opposing Napoleon dissolved the Confederation of the Rhine on 4 November 1813. After its demise, the only attempt at political coordination in Germany until the creation on 8 June 1815 of the German Confederation was a body called the Central Administration Council (German: Zentralverwaltungsrat); its President was Heinrich Friedrich Karl Reichsfreiherr vom und zum Stein (1757–1831). It was dissolved on 20 June 1815.

On 30 May 1814 the Treaty of Paris declared the German states independent.

In 1815, the Congress of Vienna redrew the continent's political map. Napoleonic creations such as the huge Kingdom of Westphalia, the Grand Duchy of Berg and the Duchy of Würzburg were abolished and suppressed states, including Hanover, the Brunswick duchies, Hesse-Kassel and Oldenburg, were reinstated. On the other hand, most members of the Confederation of the Rhine located in central and southern Germany survived with minor border changes. They, along with the reinstated states, Prussia and Austria formed the German Confederation.