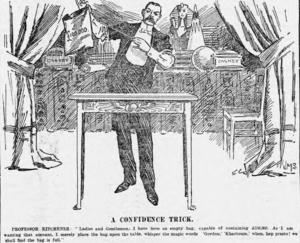 Political Cartoon by JM Staniforth: Herbert Kitchener attempts to raise £100,000 for a College in Sudan by calling on the name of Charles George Gordon

A confidence trick (synonyms include confidence game, confidence scheme, scam and stratagem) is an attempt to defraud a person or group after first gaining their confidence, used in the classical sense of trust. Confidence tricks exploit characteristics of the human psyche such as dishonesty, honesty, vanity, compassion, credulity, irresponsibility, naïveté and greed.

The perpetrator of a confidence trick (or "con trick") is often referred to as a confidence (or "con") man, con-artist, or a "grifter". The first known usage of the term "confidence man" in English was in 1849 by the New York City press, during the trial of William Thompson. Thompson chatted with strangers until he asked if they had the confidence to lend him their watches, whereupon he would walk off with the watch. He was captured when a victim recognized him on the street.[1]

A confidence trick is also known as a con game, a con, a scam, a grift, a hustle, a bunko (or bunco), a swindle, a flimflam, a gaffle or a bamboozle. The intended victims are known as "marks", "suckers", or "gulls" (i.e. gullible). When accomplices are employed, they are known as shills.

A short con or small con is a fast swindle which takes just minutes. It typically aims to rob the victim of everything in his or her wallet.[2]

A long con or big con (also, chiefly Template:Lang-en-GB)[3] is a scam that unfolds over several days or weeks and involves a team of swindlers, as well as props, sets, extras, costumes, and scripted lines. It aims to rob the victim of huge sums of money or valuable things, often by getting him or her to empty out banking accounts and borrow from family members.[4]

Stages of the con

In Confessions of a Confidence Man, Edward H. Smith lists the "six definite steps or stages of growth in every finely balanced and well-conceived confidence game." "One follows the other with absolute precision. In some games one or more of these acts, to use a theatrical comparison, may be dropped out, but where that happens the game is not a model one. The reference to the stage is apt, for the fine con game has its introduction, development, climax, dénouement and close, just like any good play. And this is not the only analogy to the drama, for the scenes are often as carefully set; the background is always a vital factor. In the colorful and mirthful language of the bunko man, all these parts of the game have their special names. I give them with their definitions:

Foundation Work
The preparations, which are made before the scheme is put in motion, including the elaboration of the plan, the employment of assistants, and so forth.
Approach
The manner of getting in touch with the victim—often most elaborately and carefully prepared.
Build-up
Arousing and sustaining the interest of the victim, introducing the scheme to him, arousing his greed, showing him the chance of profit, and filling him with so much expectation and cupidity that his judgment is warped and his caution thrown away.
Pay-off or Convincer
An actual or apparent paying of money by the conspirators to convince the victim and settle doubts by a cash demonstration. In the old banco game, the initial small bets which the victim was allowed to win were the pay-off. In stock swindles, the fake dividends sent to stockholders to encourage larger investments are the pay-off.
The Hurrah
This is like the dénouement in a play, and no con scheme is complete without it. It is a sudden crisis or unexpected development by which the mark is pushed over the last doubt or obstacle and forced to act. Once the hurrah is sprung, either the scammer has total control, or the con fails.
The In-and-In
This is the point in a con game where the conspirator puts some of his money into the deal with that of the victim; first, to remove the last doubt that may tarry in the gull’s mind, and, second, to put the con man in control of the situation after the deal is completed, thus forestalling a squeal. Often, the whole game is built up around this feature, and just as often, it does not figure at all.

In addition, some games require what is called 'corroboration', which means what it says. This is important in games where a banker or other shrewd customer is to be the victim."[5]

Confidence tricks exploit typical human characteristics such as greed, dishonesty, vanity, opportunism, lust, compassion, credulity, irresponsibility, desperation, and naïvety. As such, there is no consistent profile of a confidence trick victim; the common factor is simply that the victim relies on the good faith of the con artist. Victims of investment scams tend to show an incautious level of greed and gullibility, and many con artists target the elderly, but even alert and educated people may be taken in by other forms of a confidence trick.[6]

Accomplices, also known as shills, help manipulate the mark into accepting the perpetrator's plan. In a traditional confidence trick, the mark is led to believe that he will be able to win money or some other prize by doing some task. The accomplices may pretend to be strangers who have benefited from performing the task in the past.