From Infogalactic: the planetary knowledge core
Jump to: navigation, search
For other uses, see Congleton (disambiguation).

Congleton is a town and civil parish in Cheshire, England, on the banks of the River Dane 21 miles south of Manchester and to the west of the Macclesfield Canal. The town has a population of 25,750.[1]

Of unknown origin, the first recorded reference to the town's name was in 1282, when it was spelt Congelton. The element Congle could relate to the old Norse kang meaning a bend followed by the element the Old English tun meaning settlement.[2]

The first settlements in the Congleton area were Neolithic. Stone Age and Bronze Age artefacts have been found in the town.[3] Congleton was once thought to have been a Roman settlement, although there is no archaeological or documentary evidence to support this. Congleton became a market town after Vikings destroyed nearby Davenport.

Godwin, Earl of Wessex held the town in the Saxon period. The town is mentioned in the Domesday Book,[4] where it is listed as Cogeltone: Bigot de Loges. William the Conqueror granted the whole of Cheshire to his nephew the Earl of Chester. In the 13th century, Congleton belonged to the de Lacy family.[3] Henry de Lacy, 3rd Earl of Lincoln granted the town its first charter in 1272, enabling it to hold fairs and markets, elect a mayor and ale taster, have a merchant guild and behead known criminals.[3]

In 1451, the River Dane flooded, destroying a number of buildings, the town's mill and wooden bridge.[3] The river was diverted and the town rebuilt on higher ground.

During the Civil War, former mayor and lawyer, John Bradshaw, became president of the court which sent Charles I to his execution in 1649. His signature as Attorney General was the first on the king's death warrant.[3] A plaque on Bradshaw House in Lawton Street commemorates him. Almost opposite the town hall, the White Lion public house bears a blue plaque, placed by the Congleton Civic Society, which reads: "The White Lion, built 16-17th century. Said to have housed the attorney's office where John Bradshaw, regicide, served his articles."[5]

Congleton became notorious in the 1620s when bear-baiting, as well as cockfighting, were popular sports.[3] The town was unable to attract large crowds to its bear-baiting contests and lacked the money to pay for a new, more aggressive bear. The town used money it had saved to buy a bible and it replenished the fund with the income from the increased number of spectators. It became legend that Congleton sold its bible to pay for a new bear. The chorus of 20th century folk song "Congleton Bear",[6] by folk artist John Tams,[7] runs: 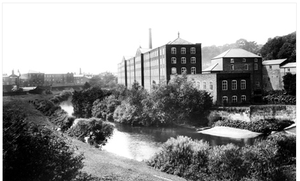 The Old Mill and the town corn mill photographed in 1902, the mill became unstable and Roldane Mill was built on the site in 1923. The mill was demolished in 2003, and sheltered housing is being built here.

King Edward I granted permission to build a mill. Congleton became an important centre of textile production, especially leather gloves and lace.[3] Congleton had an early silk throwing mill, the Old Mill built by John Clayton and Nathaniel Pattison in 1753.[8] More mills followed, and cotton was also spun. The town's prosperity depended on tariffs imposed on imported silk. When tariffs were removed in the 1860s, the empty mills were converted to fustian cutting. A limited silk ribbon weaving industry survived into the 20th century, and woven labels were still produced in the 1990s. Many mills survive as industrial or residential units.[9]

The town hall was designed, in the Gothic style, by Edward William Godwin. It was completed in 1866.[10]

The town has an elected Town Council[12] which was established in 1980. The town is split into two wards with 20 councillors elected every 4 years.

The Congleton parliamentary constituency is a county constituency represented in the House of Commons of the Parliament of the United Kingdom. It includes the towns of Congleton, Alsager, Holmes Chapel, Middlewich and Sandbach. It elects one Member of Parliament (MP) by the first-past-the-post system of election. The current MP is Fiona Bruce of the Conservative Party — the constituency has always been a safe Conservative seat. The previous incumbent was Anne Winterton. who with her husband Nicholas Winterton, the MP for neighbouring Macclesfield. After they were judged to have broken MPs' expense rules in 2008 by claiming for rent on a second home owned by a family trust, both stood down at the 2010 general election; their joint statement cited the hectic life of politics as part of their reason for standing down.[13] 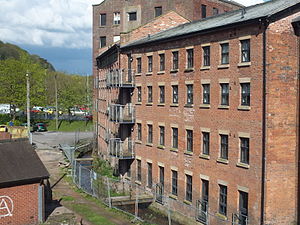 Brookside Mill, a textile mill that is being converted to residential units, on a brook leading to the River Dane in the centre of Congleton. Behind are trees on the steep northern bank.

The town of Congleton is broken up by the Congleton townspeople into seven main areas. These are Buglawton, otherwise known as "Bug Town";[14] the Bromley Farm estate, otherwise known as "Tin Town" due to the number of tin RSJs built there; Mossley, which is sometimes classed as the wealthier part of town; Hightown, which is located before Mossley between town and the railway station; West Heath, which is a relatively new estate built in the early 1960s to the early 1980s; Lower Heath to the north of the town; and finally the town centre.[citation needed] In terms of physical geography, Congleton is located in a river valley (the River Dane). To the south of the town lies an expanse of green space known locally as Priesty Fields that forms a green corridor right into the heart of the town - a rare feature in English towns.

The principal industries in Congleton include the manufacture of airbags and golf balls. There are light engineering factories near the town, and sand extraction occurs on the Cheshire Plain, although much of the town is now a dormitory for Manchester and Stoke-on-Trent.[citation needed]

Congleton Market operates every Tuesday and Saturday from the Bridestones Centre. 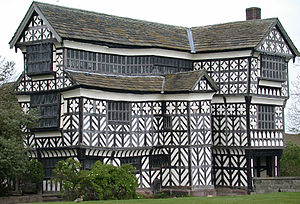 Congleton Museum is on Market Square in the centre of town. It was established in 2002 and is dedicated to Congleton's industrial history. It also contains an ancient log boat and gold and silver coin hoards.[15] Congleton Tourist Information Centre is on the town's High Street.

The independently-run 300 seat Daneside Theatre is on Park Road. The 400-seat Clonter Opera Theatre is based in the village of Swettenham Heath, 5 miles (8 km) five miles north of Congleton. Founded in 1971, Congleton Choral Society is a mixed voice choir which regularly performs choral works at Congleton Town Hall and other venues around the town.

Congleton is home to one of the oldest recorded rugby union clubs in the country,(http://www.pitchero.com/clubs/congleton/) dating back to 1860, although there have been periods when the club were not able to field a side. Currently thriving with a very successful mini and junior section and fielding two adult sides, the club currently holds the world record for the longest continuous game of rugby ever played; at 24 hours, 30 minutes and 6 seconds. There is also a local football team, Congleton Town F.C., known as the Bears, who play in the North West Counties League. Their ground is at Booth Street. There are also two cricket clubs, Congleton CC and Mossley CC. There are two golf clubs in the town; the historic Congleton Golf Club which is an undulating nine hole course with views over the Cloud End, and the 18 hole parkland course at Astbury. There is also a running club, Congleton Harriers, which meets weekly at Congleton Leisure Centre. The club organises the Congleton Half Marathon and in 2012 is re-introducing the Congleton Quarter Marathon. 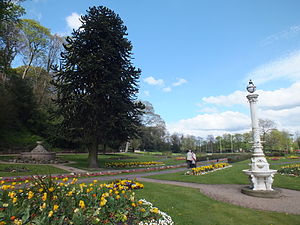 Congleton Park from the Jubilee Pavilion

Congleton Park is located along the banks of the River Dane just north east of the town centre. Town Wood on the northern edge of the park is a Grade A Site of Biological Interest and contains many nationally important plants.[16] Congleton Paddling Pool was built in the 1930s and is open in the summer months. Astbury Mere Country Park lies just to the south west of the town centre, on the site of a former sand quarry.[17][18] The lake is used for fishing and sailing and despite its name, is actually in the West Heath area of Congleton, with the boundary between Congleton and Newbold Astbury parishes lying further to the south.

The town also annually hosts a food and drink festival[19] promoting locally sourced produce/cuisine and a jazz and blues festival which showcases acts from across the UK.

There is one weekly local newspaper: the locally-owned paid-for Congleton Chronicle. The evening newspaper The Sentinel, based in Stoke-on-Trent, also covers the town. Local radio is broadcast from Congleton (Beartown Radio) and nearby Macclesfield-based Silk FM, Signal 1 and Signal 2 from Stoke-on-Trent and BBC Radio Stoke, as well as Moorlands Radio in Leek and Canalside Community Radio in Macclesfield, both community radio stations. 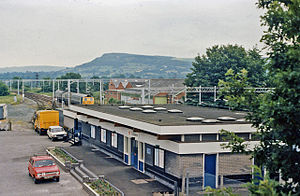 Congleton is seven miles east of the M6 motorway, connected by the A534. It is on the A34 trunk road between Stoke-on-Trent and Manchester, and the A54 to Buxton and the Peak District. The A536 links the town with Macclesfield, with the A527 linking the town to Biddulph and providing an alternative route to Stoke-on-Trent.

Congleton railway station opened on 9 October 1848. It lies on the Manchester to Stoke-on-Trent branch of the West Coast Main Line. It was revealed in The Sentinel newspaper on 7 September 2011[21] that the ticket office could be closed as part of Government budget cuts.

The Macclesfield Canal, completed in 1831, passes through the town. It runs 26 miles (42 km) from Marple Junction at Marple, where it joins the Upper Peak Forest Canal, southwards (through Bollington and Macclesfield), before arriving at Bosley. Having descended the 12 Bosley Locks over the course of about a mile (1.6 km), the canal continues through Congleton to a junction with the Hall Green Branch of the Trent & Mersey Canal at Hall Green. The canal is renowned for its elegant roving bridges, locally known as 'Snaily Bridges'. Congleton is one of few places in Britain where a road, canal and railway all cross each other at the same place. [1] The nearest airport to the town is Manchester Airport, 20 miles away.

Policing in Congleton is provided by Cheshire Constabulary. The main police station is on Market Square.

Statutory emergency fire and rescue service is provided by the Cheshire Fire and Rescue Service. Congleton Fire Station is on West Road, near the centre of town.

Congleton has a small hospital Congleton War Memorial Hospital which was built by public subscription in 1924. The town is also served by Leighton Hospital in Crewe, Macclesfield District General Hospital and the University Hospital of North Staffordshire in Stoke-on-Trent. 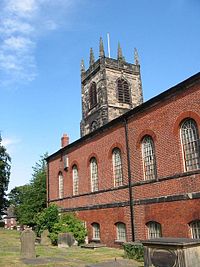 The four Anglican churches in Congleton are St John's, St Stephen's, St Peter's and Holy Trinity. They form a partnership in the Congleton Team Parish.[22] Congleton Town Council lists eleven other places of worship in the town:[23]

The Unitarian Chapel in Cross Street was founded in 1687 near the Dane Bridge and in 1733 moved to Cross Street, with the present building constructed in 1883 and closed in 1978. The United Reformed Church (Independent/ Congregationalist) was built in 1790 on Mill Street, and then rebuilt in 1876 on Antrobus Street.[31] 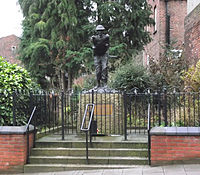