Congress of People's Deputies of the Soviet Union

The Congress of People's Deputies of the Soviet Union was created as part of Mikhail Gorbachev's reform agenda, and was enabled by Gorbachev's first constitutional change.

On 1 July 1988, the fourth and last day of the bruising 19th Party Conference, Gorbachev won the backing of the tired delegates for his last minute proposal to create a new supreme legislative body called the Congress of People's Deputies of the Soviet Union. Frustrated by the 'old guard's resistance to his attempts to liberalise Gorbachev had changed tack and embarked upon a set of constitutional changes to try and separate party and state, and thereby isolate his conservative opponents. Detailed proposals for the new Congress of People's Deputies of the Soviet Union were published for public consultation on 2 October 1988,[2] and to enable the creation of the new legislature the Supreme Soviet, during its 29 November to 1 December 1988 session, implemented the necessary amendments to the 1977 Soviet Constitution, enacted a law on electoral reform, and set the date of the election for 26 March 1989.[3]

The Congress consisted of 2,250 deputies elected in three different ways:

The congress would gather twice a year and would then elect the Supreme Soviet of the Soviet Union consisting of a smaller number of deputies. The Supreme Soviet would then serve as a permanent legislature, deciding all but the most important issues, such as amendments to the Soviet constitution, which were left to the full Congress only. 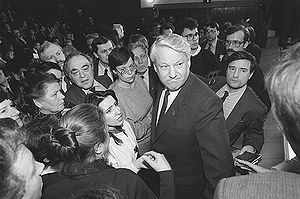 Boris Yeltsin during his electoral campaign on 1 February 1989

The month-long nomination of candidates for the Congress of People's Deputies of the USSR (CPD) lasted until 24 January 1989. For the next month, selection among the 7,531 districts nominees took place at meetings organized by constituency-level electoral commissions. On 7 March, a final list of 5,074 candidates (one in 399 constituencies, two in 953 constituencies and three or more in 163 constituencies) was published; approximately 85% of these were members of the ruling Communist Party of the Soviet Union (CPSU) and 17% were women.

In the two weeks prior to the 1,500 districts polls, elections to fill 750 reserved seats of public organizations, contested by 880 candidates, were held. Of these seats, 100 were allocated to the CPSU, 100 to the All-Union Central Council of Trade Union, 75 to the Communist Youth Union (Komsomol), 75 to the Soviet Women's Committee, 75 to the War and Labour Veterans' Organization, and 325 to other organizations such as the Academy of Sciences. The selection process was ultimately completed in April.

In the 26 March general elections, voter participation was reported at 89.8%. With this polling, 1,958 – including 1,225 district seats – of the 2,250 CPD seats were filled. In the district races, run-off elections were held in 76 constituencies on 2 and 9 April and fresh elections were organized on 20 April and 14 to 23 May in the 199 remaining constituencies where the required absolute majority was not attained.[4]

At its first session commencing on 25 May, the CPD proceeded to choose the 542 Supreme Soviet members from among 573 candidates. Final results were announced on 27 May. The Supreme Soviet, a "permanent legislative, administrative and central body of state authority of the USSR", is to be convened annually by its Presidium for its recurrent spring and autumn sessions to last, as a rule, three to four months each.

The Supreme Soviet was convened for its first session on 3 June. On 21 July, the composition of the new Council of Ministers, headed by Nikolai Ryzhkov, was announced.

Only one Congress was elected, in March 1989. The fundamental difference from previous elections in Soviet Union was that elections were actually competitive. Instead of one Communist Party-approved candidate for each seat, multiple candidates were allowed. A variety of different political positions, from Communist to pro-Western, were represented in the Congress, and lively debates took place with different viewpoints expressed.