The Congressional Black Caucus is an organization representing the black members of the United States Congress. Membership is exclusive to African-Americans.[3] Its chair in the 114th Congress is Representative G. K. Butterfield of North Carolina.

The caucus describes its goals as "positively influencing the course of events pertinent to African-Americans and others of similar experience and situation", and "achieving greater equity for persons of African descent in the design and content of domestic and international programs and services."

The CBC encapsulates these goals in the following priorities: closing the achievement and opportunity gaps in education, assuring quality health care for every American, focusing on employment and economic security, ensuring justice for all, retirement security for all Americans, increasing welfare funds, and increasing equity in foreign policy.[4]

The Congressional Black Caucus is one of the world's most esteemed bodies, with a history of positive activism unparalleled in our nation's history. Whether the issue is popular or unpopular, simple or complex, the CBC has fought for thirty years to protect the fundamentals of democracy. Its impact is recognized throughout the world. The Congressional Black Caucus is probably the closest group of legislators on the Hill. We work together almost incessantly, we are friends and, more importantly, a family of freedom fighters. Our diversity makes us stronger, and the expertise of all of our members has helped us be effective beyond our numbers.

Mark Anthony Neal, a professor of African-American studies and popular culture at Duke University, wrote a column in late 2008 that the Congressional Black Caucus and other African-American-centered organizations are still needed, and should take advantage of "the political will that Obama's campaign has generated."[5] 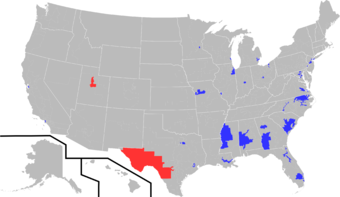 The caucus has grown steadily as more black members have been elected. At its formal founding in 1971, the caucus had thirteen members.[1] As of 2013, it had 43 members, including two who are non-voting members of the House, representing the District of Columbia and the U.S. Virgin Islands.

As of 2016, there have been only seven black senators since the caucus's founding. Edward Brooke, a Republican senator from Massachusetts in the 60s and 70s, was not a member of the CBC. In 2013, Tim Scott, Republican of South Carolina, also chose not to join the CBC after being appointed to fill the senate seat of Jim DeMint. The remaining five black senators, all Democrats, have served as members of the Congressional Black Caucus. They are Senator Cory Booker of New Jersey, elected in 2013 and currently serving; Carol Moseley Braun (1993–1999) of Illinois, then-Senator Barack Obama (2005–2008) of Illinois, Mo Cowan (2013) of Massachusetts, and Roland Burris (2008–2010). Burris was appointed by Illinois Governor Rod Blagojevich in December 2008 to fill Obama's seat for the remaining two years of his senate term. Cowan was appointed to temporarily serve until a special election after the seat was vacated by John Kerry following his appointment as Secretary of State.

Black Republicans in the CBC

Edward Brooke was the only serving black U.S. Senator when the CBC was founded in 1971, but he never joined the group and often clashed with its leaders.[6] In 1979 Melvin H. Evans, a non-voting delegate from the Virgin Islands, became the first Republican member in the group's history. Gary Franks was the first Republican voting congressman to join in 1991, though he was at times excluded from CBC strategy sessions, skipped meetings, and threatened to quit the caucus.[7] J. C. Watts did not join the CBC when he entered Congress in 1995, and after Franks left Congress in 1997, no Republicans joined the CBC for fourteen years until Allen West joined the caucus in 2011, though fellow freshman congressman Tim Scott declined to join.[8] After West was defeated for re-election, the CBC became a Democrat-only caucus once again in 2013.[9] After Democrat Mo Cowan stepped down in July 2013, the political situation bore a striking resemblance to four decades earlier: the only serving black Republican congressman (Edward Brooke in the 1971, Tim Scott in 2013) was a U.S. Senator who refused to join the CBC.

In 2014, two black Republicans were elected to the House. Upon taking office, Will Hurd of Texas declined to join the caucus, while Mia Love of Utah, the first black Republican congresswoman, joined,[10] declaring an intent to "try to take that that thing apart from the inside out," saying that "in order to effect change, you can't do it from the outside in."[11]

All past and present members of the caucus have been black. In 2006, while running for Congress in a Tennessee district which is 60% black, white candidate Steve Cohen pledged to apply for membership in order to represent his constituents. However, after his election, his application was refused.[3] Although the bylaws of the caucus do not make race a prerequisite for membership, former and current members of the caucus agreed that the group should remain "exclusively black". In response to the decision, Rep. Cohen referred to his campaign promise as "a social faux pas" because "It's their caucus and they do things their way. You don't force your way in. You need to be invited."[3]>

Rep. William Lacy Clay, Jr., D-MO., the son of Rep. William Lacy Clay Sr., D-MO., a co-founder of the caucus, said: "Mr. Cohen asked for admission, and he got his answer. He's white and the caucus is black. It's time to move on. We have racial policies to pursue and we are pursuing them, as Mr. Cohen has learned. It's an unwritten rule. It's understood." Clay also issued the following statement:

Quite simply, Rep. Cohen will have to accept what the rest of the country will have to accept—there has been an unofficial Congressional White Caucus for over 200 years, and now it's our turn to say who can join 'the club.' He does not, and cannot, meet the membership criteria, unless he can change his skin color. Primarily, we are concerned with the needs and concerns of the black population, and we will not allow white America to infringe on those objectives.

Later the same week Representative Tom Tancredo, R-CO., objected to the continued existence of the CBC as well as the Democratic Congressional Hispanic Caucus and the Republican Congressional Hispanic Conference arguing that, "It is utterly hypocritical for Congress to extol the virtues of a color-blind society while officially sanctioning caucuses that are based solely on race. If we are serious about achieving the goal of a colorblind society, Congress should lead by example and end these divisive, race-based caucuses."[12]

A predecessor to the caucus was founded in January 1969 as a "Democratic Select Committee" by a group of black members of the House of Representatives, including Shirley Chisholm of New York, Louis Stokes of Ohio and William L. Clay of Missouri. Black representatives had begun to enter the House in increasing numbers during the 1960s, and they had a desire for a formal organization.[1] The first chairman, Charles Diggs, served from 1969 to 1971. All the members of the caucus landed on the master list of Nixon political opponents.[citation needed]

Nixon refused to meet with the newly formed group, and so the group chose to boycott his 1971 State of the Union, leading to their first joint political victory and press coverage.[1]

In 1977, the organization was involved in the founding of TransAfrica, an education and advocacy affiliate that was formed to act as a resource on information on the African continent and its Diaspora.[14] They worked closely with this organization to start the national anti-apartheid movement in the US, Free South Africa Movement (characterized by sit-ins, student protests, it became the longest lasting civil disobedience movement in U.S history) and to devise the legislative strategy for the Comprehensive Anti-Apartheid Act of 1986 that was later vetoed by Ronald Reagan, and subsequently overridden. The organization continues to be active today and works on other campaigns.[14][15]

The caucus is sometimes invited to the White House to meet with the president.[18] It requests such a meeting at the beginning of each Congress.[18]

Chairs of the caucus

The following representatives have served as chairs of the Congressional Black Caucus:[19]

Members of the caucus during the 114th Congress

Officers of the 114th Congress