The Conquest of Chile is a period in Chilean historiography that starts with the arrival of Pedro de Valdivia to Chile in 1541 and ends with the death of Martín García Óñez de Loyola in the Battle of Curalaba in 1598, and the destruction of the Seven Cities in 1600 in the Araucanía region.

This was the period of Spanish conquest of territories, founding of cities, establishment of the Captaincy General of Chile, and defeats ending its further colonial expansion southwards. The Arauco War continued, and the Spanish were never able to recover their short control in Araucanía south of the Bío Bío River. 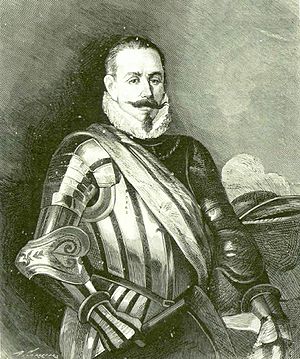 In April 1539, Francisco Pizarro authorized Pedro de Valdivia as his lieutenant governor with orders to conquer Chile. That did not include monetary aid, which he had to procure on his own. Valdivia did so, in association with the merchant Francisco Martínez Vegaso, captain Alonso de Monroy, and Pedro Sanchez de la Hoz. Sanchez was the longtime secretary to Pizarro, who had returned from Spain with authorization from the king to explore the territories south of Viceroyalty of Peru to the Strait of Magellan, also granting Valdivia the title of governor over lands taken from the indigenous peoples. 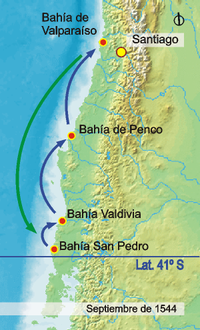 The Juan Bautista Pastene expedition to southern Chile in 1544.

Valdivia came to the Valley of Copiapo and took possession in the name of the King of Spain and named it Nueva Extremadura, for his Spanish homeland of Extremadura. On February 12, 1541 he founded the city of Santiago de la Nueva Extremadura on Huelen hill (present day Santa Lucia Hill).

Valdivia had rejected the position and titles due him while Pizarro was alive, as it could have been seen as an act of treason. He accepted the titles after the death of Francisco Pizarro. Pedro de Valdivia was named Governor and Captain-General of the Captaincy General of Chile on June 11, 1541. He was the first Governor of Chile.

Valdivia organized the first distribution of encomiendas and of indigenous peoples among the Spanish immigrants in Santiago. The Chilean region was not as rich in minerals as Peru, so the indigenous peoples were forced to work on construction projects and placer gold mining. The "conquest" was a challenge, with the first attack of Michimalonco on September of 1541, burning the new settlement to the ground.

Valdivia authorized Juan Bohon to found the city of La Serena in 1544. The Juan Bautista Pastene expedition ventured to unexplored southern Chile in 1544. Arriving at the Bio-Bio River, started the Arauco War with the Mapuche people. The epic poem La Araucana (1576) by Alonso de Ercilla describes the Spanish viewpoint.

The Spanish won several battles, such as the Andalien battle, and Penco battle in 1550. The victories allowed Valdiva to found cities on the Mapuche homelands, such as Concepcion in 1550, La Imperial, Valdivia, and Villarrica in 1552, and Los Confines in 1553.

Lautaro led the Mapuche rebellion that killed Pedro de Valdivia in the battle of Tucapel in 1553.

The destruction of the Seven Cities in 1600, and ongoing Arauco War stopped Spanish expansion southward.