Conrad I, Count of Luxembourg 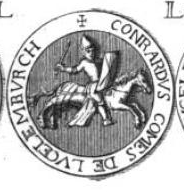 Seal of Conrad I of Luxembourg. The Latin inscription on the border of the seal reads: CONRARDVS COMES DE LVCELEMBVRCH

He was embroiled in an argument with the archbishop of Trier as to the abbaye Saint-Maximin in Trier which he had avowed. The archbishop excommunicated him and Conrad had to make honourable amends and set out on pilgrimage for Jerusalem. He died in Italy on the return journey.

He founded many abbeys:

Around 1075 he married Clementia (1060 - 1142), suggested to have been daughter of Pierre-Guillaume VII, duke of Aquitaine and of Ermesinde. They had :