Conrad I of Germany

Conrad I (German: Konrad; c. 890 – 23 December 918), called the Younger, was the King of East Francia (Germany) from 911 to 918. He was the first elected German king and also the first to be anointed.[1] He was chosen as king by the rulers of the stem duchies after the death of King Louis the Child. Prior to his election, he was the duke of Franconia from 906.

Conrad the Younger was the son of Duke Conrad of Thuringia and his wife Glismut, probably akin to Ota, wife of the Carolingian emperor Arnulf of Carinthia and mother of Louis the Child. The Conradines, counts in the Franconian Lahngau region, had been loyal supporters of the Carolingians; they competed vigorously for predominance in Franconia with the sons of the Babenberg duke Henry of Franconia at Bamberg Castle. In 906, the two parties battled each other near Fritzlar. Conrad the Elder was killed,[2] as had been two of the three Babenberg brothers; however, the King Louis took the Conradines' side and the third brother Adalbert of Babenberg was arrested and executed shortly thereafter, despite a promise of safe conduct by the king's chancellor Archbishop Hatto I of Mainz. Conrad the Younger became undisputed Duke of all Franconia after this, nevertheless his attempts to extend the rule of the Conradines over the western Lorraine (Lotharingian) part of former Austrasia failed after the death of his uncle Duke Gebhard.

Upon the death of King Louis the Child, Conrad was elected King of the East Frankish kingdom on 10 November 911 at Forchheim by the rulers of Saxony, Swabia (Alamannia) and Bavaria. The dukes resisted the succession of Louis' West Frankish Carolingian relative Charles the Simple and chose the Conradine scion, who was at least maternally related with the late king. Only Conrad's rival Duke Reginar of Lorraine refused to give him his allegiance and joined West Francia.

In 913, to patch up relations, Conrad married the sister of the Swabian count Erchanger, a grandson of King Louis the German. Cunigunda, widow of Liutpold and mother of Duke Arnulf of Bavaria, gave him two children: Cunigunda and Herman, both born in 913. 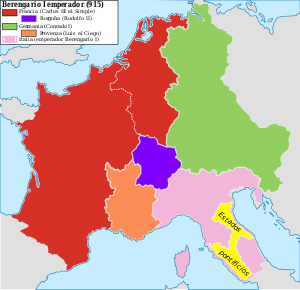 His reign was a continuous and generally unsuccessful struggle to uphold the power of the kingship against the growing power of the German dukes. His military campaigns against Charles the Simple to regain the Duchy of Lorraine with the Imperial city of Aachen were failures, Archbishop Ratbod of Trier even became West Frankish chancellor in 913. Furthermore Conrad's realm was exposed to the continuous raids of the Hungarians since the disastrous defeat of the Bavarian forces at the 907 Battle of Pressburg, leading to a considerable decline in his authority. His attempt to mobilize the East Frankish episcopate led by Archbishop Unni of Bremen to his cause at the 916 synod of Hohenaltheim was not enough to compensate. After several clashes of arms, Conrad at least was able to come to terms with Duke Henry of Saxony. The revolting Swabian dukes Erchanger (executed in 917) and Burchard II however were a continuous threat, as was the Bavarian duke Arnulf the Bad. Severely injured at one of his fights with Arnulf,[3] Conrad died on 23 December 918 at his residence Weilburg Castle. He was buried in Fulda Cathedral. 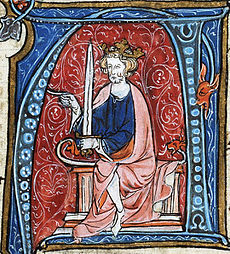 According to the Res gestae saxonicae by chronicler Widukind of Corvey, Conrad on his deathbed persuaded his younger brother Eberhard to offer the crown to Henry the Fowler, the duke of Saxony [4] and one of his principal opponents, since he considered Henry to be the only prince capable of holding the German kingdom together in the face of internal rivalries among the dukes and the continuous Hungarian raids. It was however not until May 919, when Eberhard and the other Frankish nobles accepted Conrad's advice, and Henry was elected king, as Henry I, at the Reichstag of Fritzlar.

Eberhard succeeded Conrad as duke of Franconia. He was killed in 939 at the Battle of Andernach during his rebellion against Emperor Otto I, whereafter the duchy of Franconia became a direct Imperial possession of the Ottonian dynasty until 1024.