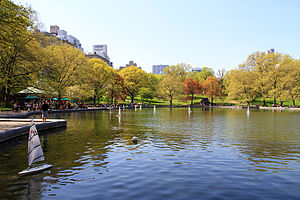 Conservatory Water lies in a natural hollow near Fifth Avenue in Manhattan, New York City's Central Park, centered opposite East 74th Street. To the south lies the slope of Pilgrim Hill, surveyed by John Quincy Adams Ward's bronze of The Pilgrim set among Prunus serrulata and other specimen trees, notably a globose European Hornbeam and nine species of oak, all set in rolling lawn. The result is a somewhat manicured Park landscape, planned in deferential reference to the estate plantings of the owners of the mansions that once lined this stretch of Fifth Avenue.

Conservatory Water is named for another estate-garden feature, a glass-house for tropical plants, to be entered from Fifth Avenue by a grand stair[1] that was planned in the original "Greensward" plan, 1857, but never built. Instead, where a parterre display of tender annuals had been planned, a naturalistic pond displaying water lilies was excavated. The steep bank towards Fifth Avenue was densely planted with shrubs and trees, including birch—for quick cover—and copper beech. Samuel Parsons, Calvert Vaux's assistant and partner, who was named Superintendent of Plantings, described the effect in his Landscape Gardening (1891):

The general shape of this pond was oval, with winding, irregular shores, bounded by a high bank on the east side and a great willow drooping over the north end. Rocks were disposed in the immediate banks, so as to suggest a natural formation, rather than an artificial pond. The bottom, scarcely three feet deep, was cemented tight as a cup, and the water flowed gently in at one end, and out at the other, and so through a basin and into the sewer. Eighteen inches of soil was made rich with manure and deposited over the bottom.[2]

The water was supplied from The Ramble and Lake, which impounded historic Sawkill, which once flowed through here, on its way to the East River.[3] Hardy water lilies, both European and American, were naturalised in the bottom mud and tender ones, planted in boxes, were wintered over in the park's conservatory, now the site of Conservatory Garden.

Later the naturalistic waterlily pond was reshaped as a model boat pond similar to that in the Jardin du Luxembourg, Paris. The formally shaped shallow basin set in a moulded curb of "Atlantic Blue" granite[4] is home water to a flotilla of model sailboats, made familiar in the pages of E.B. White's Stuart Little (1945) and recreated in the popular 1999 film. The Kerbs Boathouse (1954) in picnic Georgian taste houses resident model sailboats as well as the radio-controlled model yachts of the Central Park Model Yacht Club.

The waters of Conservatory Water shelter a seasonal population of unusual minute freshwater jellyfish, Craspedacusta sowerbyi. In the sculptured Beaux-Arts pediment of an upper-floor window of 927 Fifth Avenue, overlooking Conservatory Water, the Red-tailed Hawk named "Pale Male" set up a nest, under the binocular watch of the Park's numerous bird-watchers.

Discreetly sited near the top of Pilgrim Hill is the white granite exedra seat commemorating Waldo Hutchins (1822–1891), a member of the original Board of Commissioners for Central Park. It was executed by the Piccirilli Brothers in 1932, with a sundial featuring a bronze sculpture by Paul Manship. Incised in the bench and paving are arced lines representing shadows on the vernal and autumnal equinoxes.