From Infogalactic: the planetary knowledge core
Jump to: navigation, search
File:Hitlerwithoutmoustache0002.jpg
Hitler depicted by the United States Secret Service in 1944 to show how he might disguise himself to try to escape capture

Conspiracy theories about Adolf Hitler's death contradict the fact that Adolf Hitler committed suicide in his Führerbunker on 30 April 1945. Most of these theories hold that Hitler and his wife, Eva Braun, survived and escaped the city of Berlin. While subject to some exposure in popular culture, examples being books such as Grey Wolf: The Escape of Adolf Hitler, these viewpoints are regarded by mainstream historians as disproven fringe theories.[1] 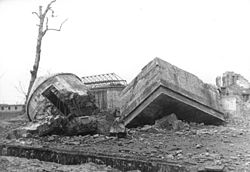 The ruined Führerbunker complex, where Hitler spent his last days in Berlin.

The theory that Hitler did not commit suicide but escaped with his wife, was deliberately promoted by Soviet government personnel as part of its policies of state-sponsored disinformation. This "myth" first being announced by Marshall Georgy Zhukov at a press conference on 9 June 1945 on orders from Soviet leader, Joseph Stalin.[2] Even at the level of the Potsdam Conference, U.S. President Harry S. Truman received a flat denial from Stalin as to whether Hitler had died. This ambiguity has been a main cause of various conspiracy theories over the years, despite the official conclusion by Western powers that Hitler indeed killed himself in April 1945.[3]

The first detailed investigation by Western powers began in November 1945 after Dick White, then head of counter-intelligence in the British sector of Berlin (and later head of MI5 and MI6 in succession), had their agent Hugh Trevor-Roper investigate the matter to counter the Soviet claims. His findings that Hitler and Braun had died by suicide in Berlin were first written in a report and then published in book form in 1947.[4] As Trevor-Roper stated in 1946, "the desire to invent legends and fairy tales...is (greater) than the love of truth".[5]

A skull fragment with a bullet hole, found outside Hitler’s bunker and kept in Russia’s federal archives in Moscow, was for decades believed to be that of Hitler. In 2009, samples of the skull were DNA-tested at the University of Connecticut by archaeologist and bone specialist Nick Bellantoni, et al. The sample was found to be that of a woman aged under 40.[7]

However, neither former Soviet nor Russian officials have claimed the skull was the main piece of evidence, instead citing jawbone fragments and two dental bridges which were found. The items were shown to Hitler's dentist, Hugo Blaschke; dental assistant Käthe Heusermann; and longtime dental technician Fritz Echtmann, who confirmed the dental remains found were Hitler's and Braun's.[8][9] The skull fragment was found only later, in 1946, when the Soviets investigated rumours of Hitler’s survival.[7]

Grey Wolf: The Escape of Adolf Hitler, by British authors Simon Dunstan and Gerrard Williams, proposes that Hitler and Braun did not commit suicide, but actually escaped to Argentina. The book's premise is that the Nazis had looted the gold reserves and art treasures of occupied countries. The scenario proposed by the two authors is as follows:

"A number of U-boats took certain Nazis and Nazi loot to Argentina, where the Nazis were supported by future president Juan Perón, who, with his wife "Evita", had been receiving money from the Nazis for some time. Hitler allegedly arrived in Argentina, first staying at Hacienda San Ramón, east of San Carlos de Bariloche[1][6] Hitler then moved to a Bavarian-styled mansion at Inalco, a remote and barely accessible spot at the northwest end of Lake Nahuel Huapi, close to the Chilean border. Around 1954, Eva Braun left Hitler and moved to Neuquén with their daughter, Ursula ("Uschi"); and Hitler died in February 1962."[10]

This theory of Hitler's flight to Argentina has been dismissed by mainstream historians, including by Guy Walters.[11] He has described Dunstan and Williams' theory as "rubbish", adding: "There's no substance to it at all. It appeals to the deluded fantasies of conspiracy theorists". Walters contends "it is simply impossible to believe that so many people could keep such a grand scale deception so quiet", saying "no serious historian would give the story any credence".[12]

After the release of the book, a controversial drama-documentary film Grey Wolf was produced by author Gerrard Williams in 2014, concluding with an extensive list of people who claimed to have seen Hitler in Argentina. The film garnered a mixed response. Also, separately, the involvement of the filmmakers with the Weavering Capital scandal attracted negative attention, with the movie's production involved with divisive financial disputes.[13][14]