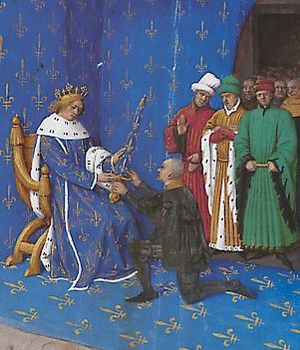 The Constable of France (French: Connétable de France, from Latin comes stabuli for 'count of the stables'), as the First Officer of the Crown, was one of the original five Great Officers of the Crown of France (along with seneschal, chamberlain, butler, and chancellor) and Commander in Chief of the army. He, theoretically, as Lieutenant-general of the King, outranked all the nobles and was second-in-command only to the King.

The Connétable de France was also responsible for military justice and served to regulate the Chivalry. His jurisdiction was called the connestablie (or in modern French orthography which sticks closer to the correct pronunciation: connétablie).

The office was established by King Philip I in 1060 with Alberic becoming the first Constable. The office was abolished in 1627 in accordance with the Edict of January 1627 by Prime Minister Cardinal Richelieu, upon the death of François de Bonne, duc de Lesdiguières, in order to strengthen the immediate authority of the King over his armed forces.

The position was officially replaced by the purely ceremonial title "Dean of Marshals" (Doyen des maréchaux), in fact the most senior "Marshal of France" (Maréchal de France) as the word doyen is used in French mainly in the sense of "the eldest".[1]

The later title Marshal General of France or more precisely "Marshal General of the King's camps and armies" (Maréchal général des camps et armées du Roi) was bestowed on outstanding military leaders. The recipient had authority over all the French armies and garrisons engaged in a war and was senior to the Maréchaux de France, but had not the extended powers of the earlier "Constable of France".

The badge of office was a highly elaborate sword called Joyeuse, after the legendary sword of Charlemagne. Joyeuse was a sword made with fragments of different swords and used in the Sacre of the French Kings since at least 1271. It was contained in a blue scabbard embellished with fleur-de-lis in column from hilt to point. Traditionally, the constable was presented with the sword on taking his office.[2]

After the abolition of the office of Sénéchal in 1191, the Connétable became the most important officer in the army, and as First Officer of the Crown, he ranked in ceremonial precedence immediately after the peers. He had the position of Lieutenant-General of the King, both within and without the kingdom. The constable had under his command all military officers, including the maréchaux; he was also responsible for the financing of the army, administering military justice within the host. The official name of the jurisdiction was la connétablie (the constabulary), which he exercised with the assistance of the Maréchaux de France (Marshals of France). This paralleled the Court of the Lord Constable, later called curia militaris of Court of Chivalry, which existed in England at that time.[3]

Persons subordinate to the Constable of France

NOT UNDER THE AUTHORITY OF THE CONSTABLE:

Note that there are gaps in the dates as the position was not always filled following the demise of its occupant.

Constables of the Kings of France

During the Consulate regime (1799-1804), the deposed Bourbon dynasty, through the Comte d'Artois, allegedly offered Napoléon Bonaparte, at that time First Consul of the Republic, the title of "Constable of France" if he would restore the Bourbons as Kings of France. Bonaparte declined the offer. However, in 1808, Emperor Napoléon I (since 1804) did appoint himself the Grand Dignitaries of the French Empire (Grands Dignitaires de l'Empire Français), among them his younger brother Louis Bonaparte, (in 1806 King of Holland by decision of his brother) as new Constable, and Marshal of the Empire Louis Alexandre Berthier, the French Army Chief of Staff and Prince of Neuchâtel as new Vice-Constable. Both titles were of a purely honorific nature and disappeared with the Napoleonic regime.

If I Were King, 1938, with François Villon (played by Ronald Colman), who was appointed by Louis XI, King of France (played by Basil Rathbone) to be Constable of France for one week.

Various versions of Shakespeare's play Henry V depict Constable Charles d'Albret, Comte de Dreux, who was appointed by Charles VI of France and was killed in the Battle of Agincourt (1415). He is played by Leo Genn in the 1944 film, by Richard Easton in the 1989 film, and by Maxime Lefrancois in the 2012 film. In the 1944 film he dies in personal combat with King Henry. In the 1989 film he is depicted as falling from his horse into the mud (historical tradition holds he was drowned in the mud due to the weight of his armour, disabled by having his horse fall on him). In the 2012 film he is shot by a longbowman after stabbing the Duke of York in the back in woodland away from the main battle.