Constance was the posthumous daughter of Roger II[1] by his third wife Beatrice of Rethel.[2]

Constance was not betrothed until she was thirty,[2] which later gave rise to stories that she had become a nun and required papal dispensation to marry.[2] The betrothal was announced 29 Oct 1184 at the Augsburg episcopal palace,[2] and they were married two years later, on 27 January 1186.

The death of her younger nephew Henry of Capua in 1172 made Constance heiress presumptive to the Sicilian crown,[3] after her elder nephew King William II, who did not marry until 1177, and whose marriage remained childless.[2] Abulafia (1988) points out that William did not foresee the union of German and Sicilian crowns as a serious eventuality; his purpose was to consolidate an alliance, with an erstwhile enemy of Norman power in Italy.

The papacy, also an enemy of the emperors, would not want to see the kingdom of southern Italy (then one of the richest in Europe) in German hands, but Henry pressed Pope Celestine III to baptize and crown his son: the Pope put him off.

Nor would the kingdom's Norman nobles welcome a Hohenstaufen king. William made his nobles and the important men of his court promise to recognize Constance's succession if he died without direct heirs. But after his unexpected death in 1189, his cousin (and Constance's nephew) Tancred seized the throne. Tancred was illegitimate, but he had the support of most of the great men of the kingdom.

Constance's father-in-law died in 1190, and the following year Henry and Constance were crowned Emperor and Empress. Constance then accompanied her husband at the head of a substantial imperial army to forcefully take the throne from Tancred. The northern towns of the kingdom opened their gates to Henry, including the earliest Norman strongholds Capua and Aversa. Salerno, Roger II's mainland capital, sent word ahead that Henry was welcome, and invited Constance to stay in her father's old palace to escape the summer heat. Naples was the first time that Henry met resistance on the whole campaign, holding well into the southern summer, by which time much of the army had succumbed to malaria and disease and the imperial army was forced to withdraw from the kingdom altogether. Constance remained in Salerno with a small garrison, as a sign that Henry would soon return.

Once Henry had withdrawn with the bulk of the imperial army, the towns that had supposedly fallen to the Empire immediately declared their allegiance to Tancred, for the most part now fearing his retribution. The populace of Salerno saw an opportunity to win some favour with Tancred, and delivered Constance to him in Messina, an important prize given that Henry had every intention of returning. However, Tancred was willing to give up his negotiation advantage, that is, the Empress, in return for Pope Celestine III legitimising him as King of Sicily. In turn, the Pope was hoping that by securing Constance's safe passage back to Rome, Henry would be better disposed towards the papacy and he was still hoping to keep the Empire and the Kingdom from uniting. However, imperial soldiers were able to intervene before Constance made it to Rome, and they returned her safely across the Alps, ensuring that in the end, both the papacy and the kingdom failed to score any real advantage in having the Empress in their custody.

Henry was already preparing to invade Sicily a second time when Tancred died in 1194. Later that year he moved south, entered Palermo unopposed, deposed Tancred's young son William III, and had himself crowned instead.

While Henry moved quickly south with his army, a pregnant Constance followed at a slower pace. On 26 December, the day after Henry's crowning at Palermo, she gave birth to a son, Frederick-Roger (the future Emperor and king of Sicily Frederick II) in the small town of Iesi, near Ancona.[1]

Constance was 40, and she knew that many would question whether the child was really hers. Thus she had the baby in a pavilion tent in the market square of the town, and invited the town matrons to witness the birth.[citation needed] A few days later she returned to the town square and publicly breast-fed the infant. 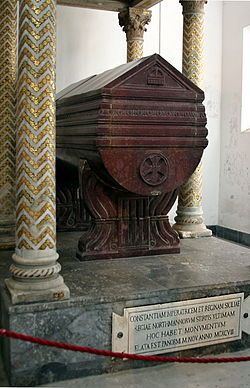 Constance's grave, in the Cathedral of Palermo.

Henry died in 1197. The following year Constance had the three-year-old Frederick crowned King of Sicily, and in his name dissolved the ties her late husband had created between the government of Sicily and of the Empire. She adopted very different policies from those of her late consort. She surrounded herself with local advisors and excluded the ambitious Markward von Anweiler from a position of power and attempted to restrict him to his fief in Molise. She made no mention of any claims to the German kingship and empire when her son was anointed and crowned at Palermo, May 1198; Constance made warm overtures to the new pope Innocent III, abandoning the long-contended principle that the king was the apostolic legate, a central principle of Norman autonomy in the regno. Faced with the dangers that surrounded any child-king, Constance placed Frederick under the protection of Pope Innocent III. She expected him to be raised as a Sicilian, and to be nothing more than King of Sicily, without distracting claims to Germany or even to the title "King of the Romans" to which her brother-in-law Philip of Swabia was acclaimed by the Roman nobles. That he became much more than that could not be predicted when she died in late November 1198. In her will she made Innocent, who was the child's feudal suzerain, his guardian, a reminder to all of the inviolability of his inheritance.

In the Divine Comedy, Dante places Constance in Paradise (though he subscribed to the story that Constance had been a nun):

"This other radiance that shows itself
to you at my right hand, a brightness kindled
by all the light that fills our heaven-- she

has understood what I have said: she was
a sister, and from her head, too, by force,
the shadow of the sacred veil was taken.

But though she had been turned back to the world
against her will, against all honest practice,
the veil upon her heart was never loosed.

This is the splendor of the great Costanza,
who from the Swabians' second gust engendered
the one who was their third and final power."