From Infogalactic: the planetary knowledge core
Jump to: navigation, search
Not to be confused with Constantine Laskaris.

Constantine Lascaris (Greek: Κωνσταντῖνος Λάσκαρις; 1434 – 15 August 1501) was a Greek scholar and grammarian, one of the promoters of the revival of Greek learning in the Italian peninsula, born at Constantinople. 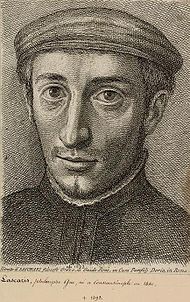 He was a member of the noble Bithynian family, which had furnished three emperors of Nicaea during the thirteenth century. After the fall of Constantinople in 1453, he took refuge in Rhodes and then in Italy, where Francesco Sforza, Duke of Milan, appointed him Greek tutor to his daughter. Here was published his Grammatica Graeca, sive compendium octo orationis partium, remarkable as being probably the first book entirely in Greek issued from the printing press, in 1476.

After leaving Milan in 1465, Lascaris taught in Naples, to which he had been summoned by Ferdinand I to deliver a course of lectures on Greece. In the following year (1466), on the invitation of the inhabitants, he settled in Messina, Sicily. On the recommendation of Cardinal Bessarion, he was appointed to succeed Andronikos Galaziotes to teach Greek to the Basilan monks of the island. He continued to teach in Sicily until his death. Among his numerous pupils was Pietro Bembo, Antonio Maurolico (the father of Francesco Maurolico), Francesco Gianelli, Giorgio Valla. Lascaris bequeathed his library of valuable manuscripts to the senate of Messina; the collection was afterwards carried to Spain and is now in the Spanish National Library in Madrid.

The Grammatica, which has often been reprinted, is the only work of value produced by Lascaris. Some of his letters are given by Johannes Iriarte in the Regiae Bibliothecae Matritensis codices Graeci manuscripti (Madrid, 1769). His name was later known to readers in the romance of Abel-Francois Villemain, Lascaris, ou les Grecs du quinzieme siècle (1825). See also John Edwin Sandys, Hist. Class. Schol., ed. 2, vol. ii (1908), pp. 76 foll.