Constantine P. Cavafy (/kəˈvɑːfɪ/;[1] also known as Konstantin or Konstantinos Petrou Kavafis, or Kavaphes; Greek: Κωνσταντίνος Π. Καβάφης; April 29 (April 17, OS), 1863 – April 29, 1933) was a Greek poet who lived in Alexandria and worked as a journalist and civil servant. He wrote 154 poems; dozens more remained incomplete or in sketch form. During his life, he consistently refused to formally publish his work and preferred to share them through local newspapers and magazines, or even print them out himself and give them away to anyone interested. His most important poetry was written after his fortieth birthday and officially published two years after his death. His work was internationally recognised, as several of them were translated in other languages. 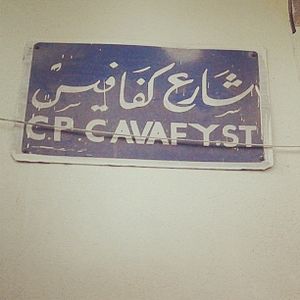 Cavafy was born in 1863 in Alexandria, Egypt, to Greek parents, and was baptized into the Greek Orthodox Church. His father's name was Πέτρος Ἰωάννης, Petros Ioannēs —hence the Petrou patronymic (GEN) in his name— and his mother's Charicleia (Greek: Χαρίκλεια; née Γεωργάκη Φωτιάδη, Georgakē Photiadē). His father was a prosperous importer-exporter who had lived in England in earlier years and acquired British nationality. After his father died in 1870, Cavafy and his family settled for a while in Liverpool in England. In 1876, his family faced financial problems due to the Long Depression of 1873, so, by 1877, they had to move back to Alexandria.

In 1882, disturbances in Alexandria caused the family to move again, though temporarily, to Constantinople. This was the year when a revolt broke out in Alexandria against the Anglo-French control of Egypt, thus precipitating the 1882 Anglo-Egyptian War. Alexandria was bombarded by a British fleet, and the family apartment at Ramleh was burned.

In 1885, Cavafy returned to Alexandria, where he lived for the rest of his life. His first work was as a journalist; then he took a position with the British-run Egyptian Ministry of Public Works for thirty years. (Egypt was a British protectorate until 1926.) He published his poetry from 1891 to 1904 in the form of broadsheets, and only for his close friends. Any acclaim he was to receive came mainly from within the Greek community of Alexandria. Eventually, in 1903, he was introduced to mainland-Greek literary circles through a favourable review by Xenopoulos. He received little recognition because his style differed markedly from the then-mainstream Greek poetry. It was only twenty years later, after the Greek defeat in the Greco-Turkish War (1919-1922), that a new generation of almost nihilist poets (e.g. Karyotakis) would find inspiration in Cavafy's work.

A biographical note written by Cavafy reads as follows:

"I am from Constantinople by descent, but I was born in Alexandria—at a house on Seriph Street; I left very young, and spent much of my childhood in England. Subsequently I visited this country as an adult, but for a short period of time. I have also lived in France. During my adolescence I lived over two years in Constantinople. It has been many years since I last visited Greece. My last employment was as a clerk at a government office under the Ministry of Public Works of Egypt. I know English, French, and a little Italian." [2]

He died of cancer of the larynx on April 29, 1933, his 70th birthday. Since his death, Cavafy's reputation has grown. He is now considered one of the finest modern Greek poets. His poetry is taught at schools in mainland Greece and Cyprus, and in universities around the world.

E. M. Forster knew him personally and wrote a memoir of him, contained in his book Alexandria. Forster, Arnold Toynbee, and T. S. Eliot were among the earliest promoters of Cavafy in the English-speaking world before the Second World War.[citation needed] In 1966, David Hockney made a series of prints to illustrate a selection of Cavafy's poems, including In the dull village.

File:Thermopyles.jpg
Manuscript of his poem "Thermopylae". 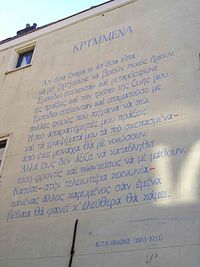 Cavafy was instrumental in the revival and recognition of Greek poetry both at home and abroad. His poems are, typically, concise but intimate evocations of real or literary figures and milieux that have played roles in Greek culture. Uncertainty about the future, sensual pleasures, the moral character and psychology of individuals, homosexuality, and a fatalistic existential nostalgia are some of the defining themes.

Besides his subjects, unconventional for the time, his poems also exhibit a skilled and versatile craftsmanship, which is almost completely lost in translation.[citation needed] Cavafy was a perfectionist, obsessively refining every single line of his poetry. His mature style was a free iambic form, free in the sense that verses rarely rhyme and are usually from 10 to 17 syllables. In his poems, the presence of rhyme usually implies irony.

Cavafy drew his themes from personal experience, along with a deep and wide knowledge of history, especially of the Hellenistic era. Many of his poems are pseudo-historical, or seemingly historical, or accurately, but quirkily, historical.

One of Cavafy's most important works is his 1904 poem Waiting for the Barbarians.The poem begins by describing a city-state in decline, whose population and legislators are waiting for the arrival of the barbarians. When night falls, the barbarians have not arrived. The poem ends: "What is to become of us without barbarians? Those people were a solution of a sort."

In 1911, Cavafy wrote "Ithaca", inspired by the Homeric return journey of Odysseus to his home island, as depicted in the Odyssey. The poem's theme is that enjoyment of the journey of life, and the increasing maturity of the soul as that journey continues, are all the traveler can ask for. To Homer, and to the Greeks in general, not the island, but the idea of Ithaca is important. Life is also a journey, and everyone has to face difficulties like Odysseus, when he returned from Troy. When you reach Ithaca, you have gained so much experience from the voyage, that it is not very important if you reached your goals (e.g. Odysseus returned all alone). Ithaca cannot give you riches, but she gave you the beautiful journey.

Almost all of Cavafy's work was in Greek; yet, his poetry remained unrecognized in Greece until after the publication of his first anthology in 1935. He is known for his prosaic use of metaphors, his brilliant use of historical imagery, and his aesthetic perfectionism. These attributes, amongst others, have assured him an enduring place in the literary pantheon of the Western World.

These poems are mainly inspired by the Hellenistic era with Alexandria at primary focus. Other poems originate from Helleno-romaic antiquity and the Byzantine era. Mythological references are also present. The periods chosen are mostly of decline and decadence (e.g. Trojans); his heroes facing the final end.

The sensual poems are filled with the lyricism and emotion of same-sex love; inspired by recollection and remembrance. The past and former actions, sometimes along with the vision for the future underlie the muse of Cavafy in writing these poems.

The poem "Thermopylae" reminds us of the famous battle of Thermopylae where the 300 Spartans and their allies fought against the greater numbers of Persians, although they knew that they would be defeated. There are some principles in our lives that we should live by, and Thermopylae is the ground of duty. We stay there fighting although we know that there is the potential for failure. (At the end the traitor Ephialtes will appear, leading the Persians through the secret trail).[3] 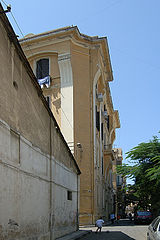 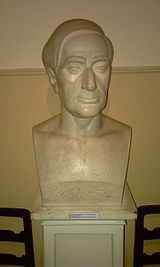 A bust of Constantine Cavafy located in his apartment. 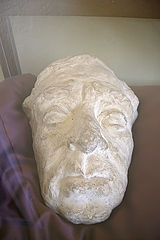 Cavafy's Alexandria apartment has since been converted into a museum. The museum holds several of Cavafy's sketches and original manuscripts as well as containing several pictures and portraits of and by Cavafy.

Selections of Cavafy's poems appeared only in pamphlets, privately printed booklets and broadsheets during his lifetime. The first publication in book form was "Ποιήματα" (Poiēmata, "Poems"), published posthumously in Alexandria, 1935.

Volumes with translations of Cavafy's poetry in English include:

Translations of Cavafy's poems are also included in

A translation of Cavafy's prose is available in