From Infogalactic: the planetary knowledge core
Jump to: navigation, search
Not to be confused with Constantine III (western emperor).

Constantius (Latin: Flavius Constantius Augustus) (died 2 September 421), commonly known as Constantius III, was Western Roman Emperor for seven months in 421. A prominent general and politician, he was the power behind the throne for much of the 410s, and in 421 briefly became co-emperor of the Western Empire with Honorius.

Early life and rise to the throne 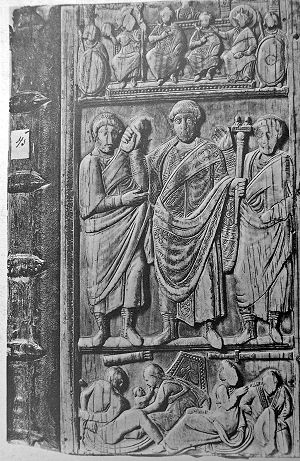 Consular diptych of Constantius III, produced for his consulate in 413 or 417.

Constantius was born in Naissus (modern-day Niš, Serbia[1]) and was probably a career soldier, who reached the rank of magister militum under Honorius.

In 411 he defeated Gerontius, the general of usurper Maximus, and Constantine III, another usurper, in Arles. Constantine had revolted against Honorius (407), but then he had broken his relationship with general Gerontius, who had proclaimed Maximus Emperor in opposition to both Honorius and Constantine (409). Gerontius had then besieged Constantine in the city of Arles (411), but the arrival of the troops of Constantius from Italy had put him in serious trouble, being at the same time a besieger and a besieged. Gerontius was abandoned by his troops and then killed in Hispania.

The able general having been disposed of, Constantius besieged the city for three months until the general of Constantine, Edobichus, who had been sent across the border to find allies, returned with a large army of Franks and Alamanni. Before the walls of Arles, Constantius confronted and defeated Edobichus, who was later betrayed and killed by a friend. Constantine was forced to surrender to Constantius when his troops on the Rhine left him for another usurper, Jovinus. Constantius granted a safe conduct to Constantine, who had become an ordained priest, but later he captured and killed him.

In 412 he expelled from Italy the Visigoths under Ataulf. In 413 he held his first consulate. In 414 he began a military offensive against the Visigoths. In response, Ataulf appointed as emperor Priscus Attalus, who had already been a usurper against Honorius in 410. The blockade imposed by Constantius on Gallic ports was so effective that the Visigoths fled from Gaul to Hispania in 415. Attalus too tried to flee but was captured by the forces of Constantius and sent to Ravenna.

With the death of Ataulf and his successor Segeric, that same year Constantius signed a treaty with the new Visigothic king Wallia: in exchange of 600,000 bushels of wheat and the territory of the region of Aquitaine, from the Pyrenees to the Garonne, the Visigoths pledged to fight on behalf of the Romans, as official allies or as a vassal state of the Empire (foederati), the Vandals, Alans and Suebi who in 407 had crossed the Rhine River and were stationed in the provinces of Hispania. The agreement also provided for the release of Galla Placidia, Honorius' sister, captured during the sack of Rome in 410.

Constantius was appointed patricius and in 417, the year of his second consulate held with Honorius as colleague, he married Galla Placidia, tying himself to the House of Theodosius. The couple had two children, Justa Grata Honoria (born 417/418) and the future Emperor Valentinian III (born 419). In 420 he was appointed consul for the third time, with the Eastern Emperor Theodosius II as colleague.

On February 8, 421, Constantius was appointed co-emperor with his ineffectual brother-in-law, Honorius, becoming the real master of the West. Curiously, he complained of the loss of personal freedom implied by the new role. The elevation of Constantius, however, was not recognized by his colleague in the East, Theodosius II, who was the nephew of Honorius.

It is said that Constantius was organizing a military expedition to the East to have his rights recognized, when he died suddenly on September 2, 421, after just seven months as emperor, the archetype of able soldier and politician that the Western Roman Empire desperately needed at the time. "A struggle to replace Constantius swiftly erupted, with some open fighting. Galla Placidia fled with her son Valentinian to Constantinople. Her brother Honorius, still childless, died in 423."[2]

Constantius' success in rising from head of the Roman army to Imperial rank obviously influenced the actions of later holders of the patrician office, a list that includes Flavius Aëtius and Ricimer; however, only Petronius Maximus ever made the same leap, and his reign was even shorter than that of Constantius.