The preamble of the constitution recalls the Declaration of the Rights of Man and of the Citizen from 1789 and establishes France as a secular and democratic country, deriving its sovereignty from the people.

It provides for the election of the President and the Parliament, the selection of the Government, and the powers of each and the relations between them. It ensures judicial authority and creates a High Court (a never convened court for judging the President[1]), a Constitutional Council, and an Economic and Social Council. It was designed to create a politically strong President.

It enables the ratification of international treaties[2] and those associated with the European Union. It is unclear whether the wording (especially the reserves of reciprocity) is compatible with European Union law.

The Constitution also sets out methods for its own amendment either by referendum or through a Parliamentary process with Presidential consent. The normal procedure of constitutional amendment is as follows: the amendment must be adopted in identical terms by both houses of Parliament, then must be either adopted by a simple majority in a referendum, or by 3/5 of a joint session of both houses of Parliament (the French Congress) (article 89). However, president Charles de Gaulle bypassed the legislative procedure in 1962 and directly sent a constitutional amendment to a referendum (article 11), which was adopted. This was highly controversial at the time; however, the Constitutional Council ruled that since a referendum expressed the will of the sovereign people, the amendment was adopted.

On 21 July 2008, Parliament passed constitutional reforms championed by President Nicolas Sarkozy by a margin of two votes. These changes, if finalized, introduce a consecutive two-term limit for the presidency, give parliament a veto over some presidential appointments, end government control over parliament's committee system, allow parliament to set its own agenda, allow the president to address parliament in-session, and end the president's right of collective pardon. (See French constitutional law of 23 July 2008)[3] 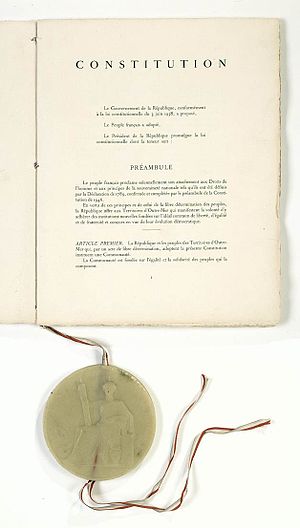 Prior to 1971, though executive, administrative and judicial decisions had to comply with the general principles of law (jurisprudence derived from law and the practice of law in general), there were no such restrictions on legislation. It was assumed that unelected judges and other appointees should not be able to overrule laws voted for by the directly elected French parliament.

In 1971, a landmark decision by the Constitutional Council (71-44DC[4]) cited the preamble of the Constitution and its references to the principles laid in the Declaration of the Rights of Man and of the Citizen as a reason for rejecting a law that, according to the Council, violated one of these principles. Since then, it is assumed that the "constitutional block" includes not only the Constitution, but also the other texts referred to in its preamble: the Declaration, but also the preamble of the 1946 Constitution (which adds a number of "social rights", as well as the equality of males and females) and the Environment Charter of 2004.

Since then, the possibility of sending laws before the Council has been extended. In practice, the political opposition sends all controversial laws before it.

For more details on amendments, see Constitutional amendments under the Fifth French Republic.

In 1962, president Charles de Gaulle controversially submitted a bill to a referendum through another procedure defined at article 11 of the Constitution, a procedure which allows the President to hold a referendum without the consent of Parliament – see French presidential election referendum, 1962. This permitted the establishment of a popularly elected presidency, that would otherwise have been vetoed by the Parliament.

Article 11 was used for constitutional changes for the second and last time in 1969, but the "No" prevailed, causing Charles de Gaulle to resign from the presidency.

France has had numerous past constitutions.