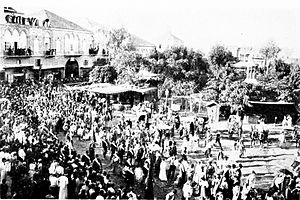 Over the centuries, Turkey has had many constitutions and can be characterized by the steady establishment of a nation-state, democratization and recognition of international law.

The Turkish constitution was ratified in 1921, revised in 1924, 1961, and finally in 1982, revised in 2010. A proposal for yet another constitution is being discussed, to allow Turkey to comply with EU accession political criteria.[1][2]