A conurbation is a region comprising a number of cities, large towns, and other urban areas that, through population growth and physical expansion, have merged to form one continuous urban and industrially developed area. In most cases, a conurbation is a polycentric urban agglomeration, in which transportation has developed to link areas to create a single urban labour market or travel to work area.[1]

The term "conurbation" was coined in 1915 by Patrick Geddes in his book Cities In Evolution. He drew attention to the ability of the (then) new technology of electric power and motorised transport to allow cities to spread and agglomerate together, and gave as examples "Midlandton" in England, the Ruhr in Germany, Randstad in the Netherlands, New York City–North Jersey in the United States,[2] the Greater Tokyo Area, Taiheiyō Belt in Japan, NCR of Delhi in India, and Southern Metro Manila in the Philippines.

The term is described in Britain, whereas the term is described in the United States to most closely be a metropolitan area by the Census Bureau. It may consist of a central city and its suburbs. A conurbation consists of adjacent metropolitan areas that are connected with one another by urbanization[clarification needed][citation needed] Internationally, the term "urban agglomeration" is often used to convey a similar meaning to "conurbation".[clarification needed][3] A conurbation should also be contrasted with a megalopolis, where the urban areas are close but not physically contiguous and where the merging of labour markets has not yet developed.

Lagos is a conurbation formed through the merged development of the initial Lagos city area with other cities and towns, such as: Ikeja, Ojo, along with various suburban communities such as: Agege, Alimosho, Ifako-Ijaiye, Kosofe, Mushin, Oshodi, Shomolu etc.[5]

Johannesburg, Ekurhuleni (East Rand), and Tshwane (greater Pretoria) are currently merging to form a region that comprises a population of 14.6 million people.[6] 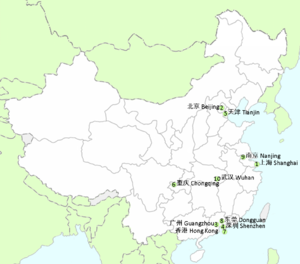 The Mumbai Metropolitan Region (MMR) is a metropolitan area consisting of the metropolis of Mumbai and its satellite towns. Developing over a period of about 20 years, it consists of seven municipal corporations and fifteen smaller municipal councils. The region has an area of 4,355 km² and with a population of 20,998,395, it is among the top ten most populated urban agglomerations in the world. It is linked with Mumbai through the Mumbai Suburban Railway system and a large network of roads. The National Capital Region (NCR) is a name for the conurbation or metropolitan area which encompasses the entire National Capital Territory of Delhi as well as Gurgaon, Faridabad, Noida and Ghaziabad that are urban areas ringing it in the neighbouring states of Uttar Pradesh, Haryana and Rajasthan. The population of the NCR region is 21.7 million.[8]

Dhaka has recently been linked with Narayanganj and Gazipur city such that there are no gaps between Dhaka and those two cities.

The Taiheiyō Belt is the largest conurbation in Japan in every term, extending from Ibaraki Prefecture to Fukuoka Prefecture, running almost 1,200 km, with the total population of 82.9 million. The Greater Tokyo Area, also called Shutoken (the National Capital Region), is a metropolitan area in the Kantō region, with the estimated population of 35,676,000 in 2007, often referred to as the most populous and economically largest metropolitan area in the world.

The Klang Valley conurbation in the state of Selangor is composed of:

The Caribbean area, which is generally not considered to be part of a continent geographically speaking, has a small conurbation in Puerto Rico consisting of San Juan, Bayamon, Guaynabo, Carolina, Canovanas, Caguas and Catano. This area is colloquially known as the "Area Metropolitana" in Puerto Rico.

The Flemish Diamond (Dutch: Vlaamse Ruit) is the Flemish reference to a network of four metropolitan areas in Belgium, three of which are in the central provinces of Flanders, together with the Brussels Capital Region. It consists of four agglomerations which form the four corners of a diamond shape: Brussels, Ghent, Antwerp and Leuven.[2] Over five million people live in this conurbation, with a population density of more than 800 per square kilometre.[3] 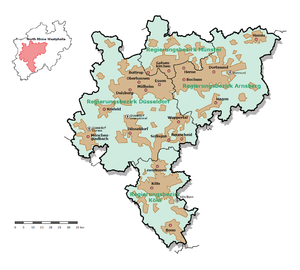 Rhine-Ruhr, the largest conurbation of the European continent

Germany has three conurbations along the River Rhine, namely Rhine-Main, Rhine-Neckar and Rhine-Ruhr. The Rhine-Ruhr is the largest conurbation in continental Europe and is a densely populated polycentric metropolitan region in the western part of Germany, comprising the three subregions of Ruhr Metropolitan Region, Düsseldorf-Mönchengladbach-Wuppertal Region and Cologne/Bonn Metropolitan Region. These three are all interlinked by a continuous urban settlement, while at the same time having cultural and economic differences.

The Randstad, which is a densely populated area in the Netherlands, with over 7 million inhabitants, consisting of a cluster of the four biggest cities of the country (Amsterdam, Rotterdam, The Hague and Utrecht) and several smaller cities, towns and urbanized villages, is another appropriate example of a conurbation.

Katowice urban area (aglomeracja katowicka', konurbacja górnośląska, GOP) is the biggest conurbation in Poland, located in Upper Silesia, southern Poland. Around 2.5 million people live in the region which makes up 5.26% of population of Poland.

Main article: List of conurbations in the United Kingdom

The article link above was changed to List of urban areas in the United Kingdom.

Industrial and housing growth in the United Kingdom during the 19th and early 20th centuries produced many conurbations. Greater London is by far the largest urban area and is usually counted as a conurbation in statistical terms, but differs from the others in the degree to which it is focused on a single central area.[3] In the mid-1950s the Green Belt was introduced to stem the further urbanisation of the countryside in England. Note that as used in the United Kingdom, the term "conurbation" is closer to the meaning of urban agglomeration.

The list below shows the most populous urban areas in the UK as defined by the Office for National Statistics (ONS). The Greater London Urban Area contains the whole of what is commonly called London, but ONS definitions divide London into a large number of smaller localities of which the largest is Croydon.

The "Golden Horseshoe" is a densely populated and industrialized region centred on the west end of Lake Ontario in Southern Ontario, Canada. Most of it is also part of the Windsor-Quebec City corridor. With a population of 8.8 million people, the Golden Horseshoe makes up slightly over a quarter (25.6%) of the population of Canada and contains approximately 75% of Ontario's population,[15] making it one of the largest population concentrations in North America. Although it is a geographically named sub-region of Southern Ontario, "Greater Golden Horseshoe" is more frequently used today to describe the metropolitan regions that stretch across the area in totality. The largest cities in the region include Toronto, Mississauga, Oakville, Burlington, St. Catherines, Brampton, and Hamilton.[16]

Greater Montreal is Canada's 2nd largest conurbation, with Statistics Canada defining the Census Metropolitan Area (CMA) as 4,258.31 square kilometres (1,644.14 sq mi) and a population of 3,824,221 as of 2011, which represents almost half of the population of the province of Quebec. Slightly smaller, there are 82 municipalities grouped under the Montreal Metropolitan Community to coordinate issues such as land planning, transportation, and economic development.

British Columbia's Lower Mainland is the most populated area in Western Canada. It consists of many mid-sized continuous urban areas, including Vancouver, North Vancouver (city and district municipality), Surrey, Burnaby, Richmond, and Coquitlam. The Lower Mainland population is around 2.5 million as of 2011 and the area is among the highest growth rates in the continent up 9.2 percent from the 2006 census.[17] 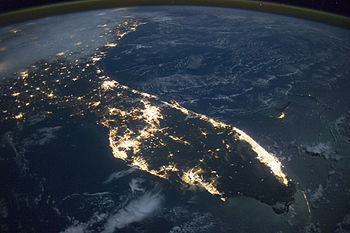 A satellite image of Florida showing South Florida (bottom right), which consists of hundreds of municipalities, as a continuous agglomeration of lights. Also, Greater Orlando and Tampa areas encroach via the I-4 corridor.

One example of a conurbation is the expansive concept of the New York metropolitan area (the Tri-State Region) centered on New York City, including 30 counties spread between New York State, New Jersey, Connecticut, and Pennsylvania, with an estimated population of 21,961,994 in 2007.[18] Approximately one-fifteenth of all U.S. residents live in the Greater New York City area. This conurbation is the result of several central cities whose urban areas have merged.

Holding a population of 7,427,336 as of 2005, the Combined Statistical Area including Greater Boston consists of Boston proper and a collection of distinct but intertwined cities including Providence, Rhode Island, Worcester, Massachusetts, and Manchester, New Hampshire. Most importantly, the cities that comprise the Greater Boston CSA are interlinked by heavy public transportation infrastructure, maintain continuously urban interstices, and hold mutual commuting patterns.

Another conurbation is the combination of the metropolitan areas of San Francisco, Oakland, and San Jose and several minor urban centers, known as the San Francisco Bay Area.

The Greater Los Angeles Area consists of the merging of several distinct central cities and counties, including Los Angeles, Orange County, Riverside, and San Bernardino. This area is also often referred to simply as Southern California or colloquially as SoCal (a larger region which tends to include San Diego).

The largest conurbation between the United States and Mexico, San Diego–Tijuana includes the two countries' busiest border crossing and a shared economy.[19]

Three large cities, Dallas, Fort Worth, and Arlington, make up this area. Each city is linked by touching city limits or suburbs. This area is also commonly known as the Metroplex and is included in the emerging megalopolis known as the Texas Triangle.

The major U.S. city of Detroit, Michigan lies immediately across the Detroit River from Windsor, Ontario in Canada. In many respects—economically, historically, culturally, socially, and, of course, geographically—Windsor is more a part of Metro Detroit than of Ontario. The two cities and their surrounding suburbs are commonly referred to collectively as the Detroit–Windsor area. The Detroit-Windsor border is the largest commercial border crossing in North America and the busiest between the two countries.[20] With a combined total population of nearly six million, Detroit-Windsor is the world's largest trans-border metropolitan area (since Hong Kong was returned to China.)

The entire tri-county area also known as the Miami-Fort Lauderdale-West Palm Beach metropolitan area is now continuously urbanized along a roughly 100 miles (161 km) length of the Florida east coast as well as extending inland and continuing south of Miami as far as Florida City. Although this is generally all referred to as a single metropolitan area, not a conurbation, it is sometimes broken up into the Miami, Fort Lauderdale, and West Palm Beach metros.

Minneapolis–Saint Paul is the most populous urban area in the state of Minnesota, and is composed of 182 cities and townships built around the Mississippi, Minnesota, and St. Croix rivers. The area is also nicknamed the Twin Cities for its two largest cities, Minneapolis, with the highest population, and Saint Paul, the state capital.

Brisbane, Gold Coast, and Sunshine Coast are currently merged to form a region known as South East Queensland (SEQ) that comprises a population of 3.05 million people. Its most common use is for political purposes, and covers 22,420 square kilometres (8,660 sq mi) and incorporates ten local government areas, extending 240 kilometres (150 mi) from Noosa in the north to the Gold Coast and New South Wales border in the south (some sources include Tweed Heads (NSW) which is contiguous as an urban area with Brisbane/Gold Coast), and 140 kilometres (87 mi) west to Toowoomba.

In 2010 Auckland became a unitary authority encompassing seven former city and district councils including Auckland City, Waitakere City, North Shore City and Manukau City as well as a number of smaller towns, rural area and the islands of the Hauraki gulf. Auckland is the largest council in Australasia and the region has a population of 1,529,300, being almost 33% of the total population of New Zealand.

There are 4 conurbations of at least 10 million people in South America, with at least one more soon to reach that population.

The entire Rio–São Paulo area is also sometimes considered a conurbation, and plans are in the works to connect the cities with a high-speed rail. Yet the government of Brazil does not consider this area a single unit for statistical purposes, and any population numbers would be synthetic.