The Convair 880 was a narrow-body jet airliner produced by the Convair division of General Dynamics. It was designed to compete with the Boeing 707 and Douglas DC-8 by being smaller and faster, a niche that failed to create demand. When it was first introduced some aviation circles claimed that at 615 mph (990 km/h) it was the fastest jet transport in the world.[1] Only 65 Convair 880s were produced over the lifetime of the production run from 1959 to 1962, and General Dynamics eventually withdrew from the airliner market after considering the 880 project a failure. The Convair 990 was a stretched and faster variant of the 880.

Convair began development of a medium-range commercial jet in April 1956, to compete with announced products from Boeing and Douglas. Initially the design was called the Skylark but the name was later changed to the Golden Arrow, then Convair 600 and then finally the 880, both numbers referring to its top speed of 600 mph (970 km/h) or 880 ft/s (268 m/s). It was powered by General Electric CJ-805-3 turbojets, a civilian version of the J79 which powered the F-104 Starfighter, F-4 Phantom[2] and Convair B-58 Hustler.

The first example of the initial production version, the Model 22, made its maiden flight on January 27, 1959.[3] There was no prototype. After production started the FAA mandated additional instrumentation, which Convair added by placing a "raceway" hump on the top of the fuselage, rather than ripping apart the interiors over the wing area. The final assembly of the 880 and 990 took place at the Convair facilities in San Diego, California.[4]

The airliner never became widely used and the production line shut down after only three years. The 880's five-abreast seating made it unattractive to airlines, while Boeing was able to out-compete it with the Boeing 720, which could be sold much more cheaply as it was a minimal modification of the existing 707. In addition, the General Electric engines had a higher specific fuel consumption than the Boeing's Pratt & Whitney JT3Cs.

General Dynamics lost around $185 million over the lifetime of the project, although some sources estimate much higher losses. It is generally agreed that the losses incurred in the Convair 880/990 were the largest losses incurred by a corporation up to that time. The aircraft were involved in 17 accidents and five hijackings.

A more major modification to the 880 became the Convair 990, produced in parallel with the 880-M between 1961 and 1963. Swissair named theirs Coronado, after an island off the San Diego coast and where the first 990 landed, despite Convair's flying boat with that name.[6] 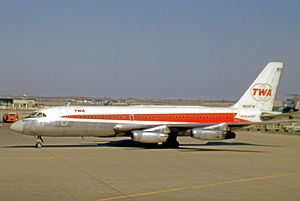 Trans World Airlines was the major operator of the Convair 880. One of their aircraft departs from Chicago O'Hare on a scheduled service in April 1971.

The design entered service with Delta Air Lines in May 1960, slightly modified as the 880-22m, having newer version 805-3B engines. 880s were flown by Cathay Pacific, Delta, Japan, Northeast, Swissair, TWA and VIASA.

As they left commercial service, many 880s were bought by American Jet Industries for various uses. One example was converted to freighter use in 1974, and flew until 1982 with various companies. Another was used to train FAA flight examiners until it was destroyed by a minor explosion in the cargo hold in 1995. Most of the remaining examples were scrapped by 2000. 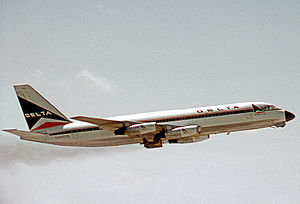 The United States Navy acquired one 880-M in 1980 modifying it as an in-flight tanker. It had been purchased new from Convair by the FAA, and used for eighteen years.[7] Unofficially designated UC-880, it was assigned to the Naval Air Test Center, Patuxent River, and employed in Tomahawk Cruise Missile testing and aircraft refueling procedures.[8] Convair designed and manufactured the Tomahawk and Advanced Tomahawk Cruise Missile in San Diego where the 880 and 990 were produced. The sole UC-880 was damaged in a cargo hold explosive decompression test at NAS Patuxent River, Maryland in 1995.[9] The aircraft managed to remain theoretically controllable via backup systems unique to the 880 & 990.[10] 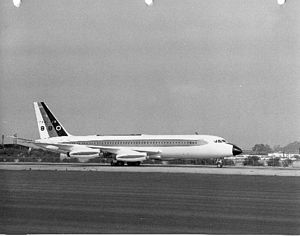 One of the first 880s, in the factory gold, white and black scheme 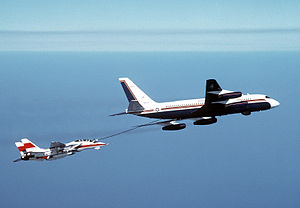 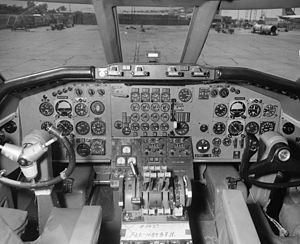 The flight deck of a new Convair 880 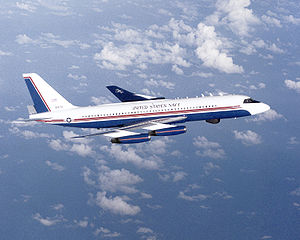 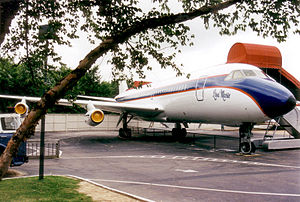 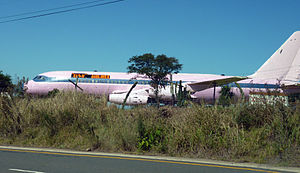 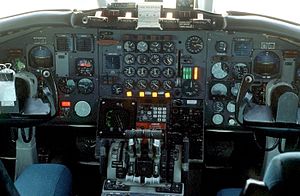 The cockpit instrument panel of the USN UC-880

The last aircraft was withdrawn from commercial service by major operators in 1975. There were only nine airframes left in the world as of December 2005 — five in the United States, and one each in Haiti, Portugal, Venezuela and South Africa. None are airworthy, and only one is properly preserved: Elvis Presley's Lisa Marie (named after his daughter), at Graceland in Memphis. It was formerly in commercial service with Delta.[11] In January 2015 it was put up for sale and eventually bought back by Elvis Presley Enterprises, which shall continue exhibiting it as a part of the Presley Museum [12] One of the other four U.S. aircraft was subsequently cut up for scrap in April 2007, although the forward fuselage is being saved for use in a museum. The one existing in Portugal was placed near Lisbon Airport and converted into a strip club until being sold for scrap. It was destroyed on April 28, 2008.[13] In addition, the forward fuselage of former TWA Convair 880 N803TW (MSN 3) is being restored at the Aviation Hall of Fame and Museum of New Jersey for eventual display.[14]

Ex Japan Airlines Convair 880 MSN 22-7-6-58 (58th produced) was converted into a business jet in the 1970s (registration N88CH). It was purchased by the Ciskei government in 1987 intended for use by president Lennox Sebe, but remained at Bhisho Airport for several years due to a lack of funds to make it airworthy. In 1992 it was bought by Billy Nel (now Eastern Cape Provincial Finance MEC), who had it transported to his private residence north of East London, South Africa. The 1970s VIP interior with couches, beds and a bar remain intact and it is used for private functions. One of the engines was donated to the Stutterheim Engine Museum.[9][15][16][17]