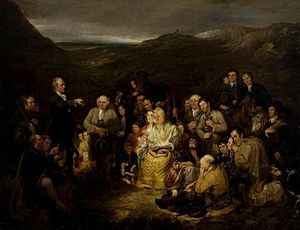 A conventicle is a small, unofficial and unofficiated religious meeting of laypeople.

In England there were three acts of parliament passed to coerce people to attend Church of England services and to prohibit unofficiated meeting of laypeople:

The Conventicle Act of 1593 lasted for just one parliament and allowed for the imprisonment without bail of those over the age of sixteen who failed to attend Church; who persuaded others to do the same; who denied Her Majesty's authority in matters ecclesiastical; and who attended unlawful religious conventicles.[1]

The Conventicle Act 1664 forbade conventicles (five or more people, other than an immediate family, meeting in religious assembly outside the auspices of the Church of England).[2] This law was part of the Clarendon Code, named after Edward Hyde, 1st Earl of Clarendon, which aimed to discourage nonconformism and to strengthen the position of the Established Church.

Many Calvinists, however, held that the only "true" church was a voluntary gathering of believers and that, therefore, it was the official parish churches of the Church of England - which offered the sacraments even to sinners and "Papists" - that were the false churches while an officially illegal conventicle could be a true church. 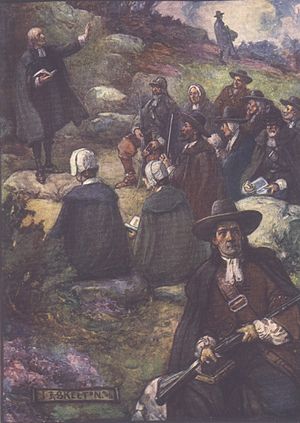 Imaginary depiction of a conventicle in progress, from H. E. Marshall's Scotland's Story (1906)

Conventicles of believers in Reform were held in Scotland in the 1500s and are considered to have been instrumental in the movement that drove the French regent Mary of Guise from power. From 1660 to the 1688 Revolution conventicles were usually held by Covenanters opposed to Charles II's forced imposition of Episcopalian government on the established Church of Scotland.

In order to protect the Presbyterian polity and Calvinist doctrine of the Church of Scotland, the pre-Restoration government of Scotland[5] signed the 1650 Treaty of Breda with King Charles II to crown him king and support him against the English Parliamentary forces. At his Restoration in 1660, the King immediately renounced the terms of the Treaty and his Oath of Covenant, which the Scottish Covenanters saw as a betrayal.

The Rescissory Act 1661 repealed all laws made since 1633, effectively ejecting 400 Ministers from their livings, restoring patronage in the appointment of Ministers to congregations and allowing the King to proclaim the restoration of Bishops to the Church of Scotland. The Abjuration Act of 1662 ..was a formal rejection of the National Covenant of 1638 and the Solemn League and Covenant of 1643. These were declared to be against the fundamental laws of the kingdom. The Act required all persons taking public office to take an oath of abjuration not to take arms against the king, and rejecting the Covenants. This excluded most Presbyterians from holding official positions of trust. [6]

The resulting disappointment with Charles II's religious policy became civil unrest and erupted in violence during the early summer of 1679 with the assassination of Archbishop Sharp, Drumclog and the Battle of Bothwell Bridge. The Sanquhar Declaration of 1680 effectively declared the people could not accept the authority of a King who would not recognise their religion, nor commit to his previous oaths. In February 1685 the King died and was succeeded by his Roman Catholic brother the Duke of York, as King James VII.

In Finland the conventicle has remained the base activity especially in the Finnish Awakening revivalist movement. Today, the cell groups used in some churches are similar.

Philipp Jakob Spener called for such associations in his Pia Desideria, and they were the foundation of the German Evangelical Lutheran Pietist movement. Due to concern over possibly mixed-gender meetings, sexual impropriety, and subversive sectarianism conventicles were condemned first by mainstream Lutheranism and then by the Pietists within decades of their inception.

The growth of conventicles is closely related to Pietism and the Charismatic Movement. In the American Lutheran Church, in particular, there has been considerable debate about conventicles stemming from 17th and 18th century Pietism. Thompson attributes today's Lutheran mission societies, ladies societies, youth groups, Bible studies, group devotions beyond actual church services, Lutheran elementary schools and high schools, and charitable and fraternal organizations associated with the church as all forms of conventicles. According to C.F.W. Walther, the founder of the Lutheran Church-Missouri Synod, such movements had to be opposed or carefully monitored, a caution that remains in effect.[7]

According to Neville, the tradition of conventicles in Celtic lands can be found in the outdoor worship quite common in American communities, such as the South, that had been populated by Celtic ancestors. Neville describes it as folk tradition and ritual. Among the forms conventicles take are frontier revivals, family reunions, and cemetery services[8] as well as the more recent house church movement.

Early Mormon meetings were sometimes referred to as conventicles.[9]

Conventicles in other religions

According to Smith the mosque is a conventicle rather than an ecclesiastical institution. The mosque is an initiative of the community rather than a body led by a priesthood.[10] In particular the Jama'at Khana (or masalla) approximates the status of a conventicle. According to Kaufman, modern-day Jewish synagogues resemble churches whereas smaller meeting places—the shul, hevre, anshe, or shtibl—can be described as conventicle settings.[11]