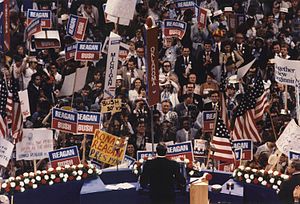 Ronald Reagan addresses the 1980 GOP convention. Reagan saw a big boost in the polls after his acceptance speech, but his opponent, President Jimmy Carter, got an equally large bump after his convention four weeks later.

Bill Clinton benefited from one of the largest bumps in history after the Democratic National Convention in 1992, climbing by as many as 30 points in the polls,.[3] Then-President George H.W. Bush's convention bounce was weak by comparison, some party leaders blaming former primary challenger Pat Buchanan's fiery and divisive speech, which aired in primetime due to a scheduling delay. Four years later, Bob Dole got a big bounce after the Republican convention, but quickly fizzled. However, Al Gore's 2000 bounce endured for weeks. Prior to the Democratic convention, Gore was behind Texas Gov. George W. Bush by as many as 16 points, but was in a statistical tie with the Republican the weekend after his acceptance speech. To the bafflement of political pundits, Democratic candidate John Kerry did not get a convention bounce in 2004,[4] despite the unpopularity of incumbent George W. Bush.

Polls indicated a small bounce for 2008 Democratic presidential nominee Barack Obama after his party's convention in August,[5] but as expected, much of it evaporated during and after the Republican convention the week following, yielding GOP candidate John McCain a small lead in several polls.[6][7] Nielsen ratings revealed that year's party conventions to be the most-watched ever, with the Republican convention narrowly trumping the Democrats'.[8]

The RealClearPolitics polling index revealed the 2012 convention bounces for President Obama and GOP challenger Mitt Romney to be comparably smaller than in past elections.[9] Though Romney pulled even with Obama during that year's Republican convention at the end of August, Obama opened up a three- or four-point lead during the Democratic convention the week after.[9]