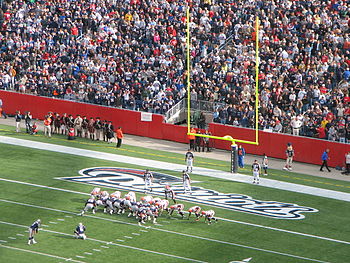 A typical lineup for an extra point: the kicker is Stephen Gostkowski of New England against Cleveland, 2007

The try (American football, also known as a point(s) after touchdown, PAT, or extra point) or convert (Canadian football) occurs immediately after a touchdown during which the scoring team is allowed to attempt to score one extra point by kicking the ball through the uprights in the manner of a field goal, or two points by bringing the ball into the end zone in the manner of a touchdown; depending on league rules, one point may also be scored by manner of a safety.

Attempts at a try or convert are scrimmage plays, with the ball initially placed at any point between the hash marks, at the option of the team making the attempt. The yard line that attempts are made from depends on the league and the type of try or convert being attempted.

If the try or convert is scored by kicking the ball through the uprights, the team gets an additional one point for their touchdown, bringing their total for that score from six points to seven. If two points are needed or desired, a two-point conversion may be attempted by running or passing from scrimmage. A successful touchdown conversion brings the score's total to eight.

Whether a team goes for one or two points, most rules regarding scrimmage downs, including scoring touchdowns and field goals, apply as if it were a normal American fourth-down or Canadian third-down play. Exceptions, including cases where the defense forces a turnover during a conversion attempt, vary between leagues and levels of play.

The try/convert is among the oldest parts of the game of gridiron football and dates to its rugby roots. In its earliest days, scoring a touchdown was not the primary objective but a means of getting a free kick at the goal (hence why the name "try," more commonly associated with rugby today, is still used in American football rule books), and thus early scoring rubrics for the game gave more points to the subsequent kick than the actual advancement of the ball into the end zone. The related term "conversion" is still used in both rugby union and rugby league to refer to extra points scored by kicking the ball through the posts after a try has been scored.

By the start of the 20th century, touchdowns had become more important and the roles of touchdown and kick were reversed. By this time the point value for the after-touchdown kick had reduced to its current one-point value while the touchdown was now worth five. (This later increased to six points in American football in 1912 and in Canadian football in 1956.)[citation needed]

Although a successful kick is only worth one point, missed or blocked attempts can decide the outcome of the game. Perhaps the most famous example to this was the 2003 game between the New Orleans Saints and Jacksonville Jaguars where, after scoring a touchdown as time expired as a result of the multiple-lateral River City Relay, Saints kicker John Carney missed the extra point, giving the Jaguars a 20-19 victory. On November 11, 1979, the New York Jets lost to the Buffalo Bills 14-12 - the difference coming from two missed extra points by place kicker Toni Linhart. Linhart, who had been cut earlier in the 1979 season by the Baltimore Colts and was signed by the Jets to fill in for the injured Pat Leahy, never played another game in the NFL.

Another 2003 game, this one between the Carolina Panthers and Tampa Bay Buccaneers, was sent to overtime after what would have been a game-winning extra point was blocked; the Panthers won the game in overtime 12-9. A 2005 game between the Green Bay Packers and Tampa Bay Buccaneers is another notable exception, as the Buccaneers won 17-16, the difference being Ryan Longwell missing an extra point after a Packers touchdown.[1]

In the 2016 AFC Championship Game, New England Patriots placekicker Stephen Gostkowski missed an extra point in the first quarter, keeping the score at 7–6 in favor of the Denver Broncos. The Patriots were forced to go for two when they scored a touchdown late in the fourth quarter. The two-point try was intercepted, putting the Broncos in Super Bowl 50 with a 20–18 victory.[2]

The CFL and NFL both made major changes to the rules governing conversions prior to their respective 2015 seasons, reducing and eliminating some of the differences between the two leagues in the process as discussed below.

Duration of the play

In American high school football (in most states), the play is over once the ball becomes dead or the defense takes possession. In many other levels of football, including the CFL, NFL, and American college football, the play continues after a turnover to the defense. This allows the defense to return the ball to the opponent's end zone for two points and also allows for a one-point safety. Two states, Texas and Massachusetts, play high school football under NCAA rules and thus allow the defense to score on an extra-point attempt.

Prior to the 2015 season, the NFL used the two-yard line for all Conversion (P.A.T.) attempts. In American high school and college football, it is from the three-yard line. In Canadian football, the line of scrimmage was from the five-yard line.

In American football, the game clock does not run during an extra-point attempt, except for some rare circumstances at the high-school level (some state associations allow for the clock to run continuously in the second half if one team is leading the other by a large margin)[3] and for arena football, which runs the clock continuously except during the final minute of each half and overtime. In Canadian football, the clock runs during a conversion attempt except during the last three minutes of each half. 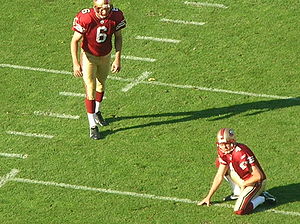 In the NFL, the conversion is required after a touchdown scored during the regulation game (i.e., not overtime), because point differential is used for some tiebreakers in the standings. Rarely, this can result in such an attempt having to be made at the end of the game when it cannot change the outcome of the game; two of the best-known examples of this occurred after the winning touchdown by the Philadelphia Eagles in the December 19, 2010 game known as the Miracle at the New Meadowlands and after the controversial game-winning touchdown by the Seattle Seahawks on September 24, 2012.

If the game is in sudden death overtime, the extra-point attempt is omitted if the winning score is a touchdown. In American high school and college football, it is likewise omitted following a touchdown on the game's final play if a successful conversion attempt cannot change the outcome of the game.

There is, however, one notable exception in college football because the defense can also score two points on a return of a conversion try (and theoretically score a one-point safety) and the NCAA rules state that the conversion try must be run if any subsequent scoring on the play could impact the outcome of the game. Therefore, if a team scores to take the lead by one or two points as time expires, they must still attempt the conversion, although most teams will simply opt to take a knee to prevent the risk of the defense scoring. For example, on October 24, 2009, Iowa scored as time expired to take a 15–13 lead over Michigan State. Making the conversion would have made no difference in Iowa winning the game, but Iowa still had to attempt it, so Ricky Stanzi simply knelt down, as a return by Michigan State would have tied the game and forced overtime.

In Canadian football, the scoring team is entitled to a conversion play after scoring with no time on the clock, but may choose to waive it if they feel it is not needed. Because head-to-head points scored is used as a tiebreaker in the standings between teams, they often choose to take it if is against a division opponent with whom a tie in the standings is possible.

The CFL and NFL both implemented major changes to how conversions were attempted starting with their respective 2015 seasons.[4][5]

In the NFL, the line of scrimmage for a kick attempt moved back 13 yards to the 15-yard line, effectively placing the ball the same distance from the goalposts as in the CFL. The line of scrimmage for a two-point attempt remained at the two-yard line. However, NFL defenses became able to run back failed conversion attempts for a two-point score. On December 6, 2015, New Orleans Saints linebacker Stephone Anthony became the first player in NFL history to do so, after New Orleans blocked an extra-point kick by the Carolina Panthers.[6]

In 1968, the AFL and NFL eliminated the extra-point kick for interleague preseason games, allowing only one-point scrimmage plays. The World Football League and XFL did the same in their short lives, though the XFL later implemented a variable system that allowed increasing point values for increasing the distance to the end zone on the attempt for its playoffs; that system was later adopted by the Stars Football League[citation needed] and, in a reduced form, the Legends Football League.[7] The CFL proposed to test the variable-distance scoring system during the 2015 preseason, but the proposal was rejected. In arena football, two points can also be scored by means of a drop-kicked field goal. Some youth football leagues turn the scoring upside-down to an extent, scoring one point for a running touchdown and two points for either a passing touchdown or field goal; six-man football follows a similar convention that rewards one point for a pass or run and two points for a kick.