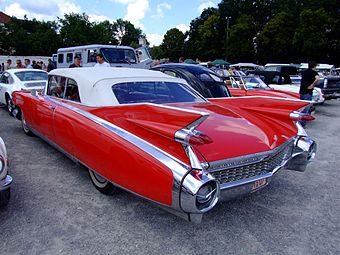 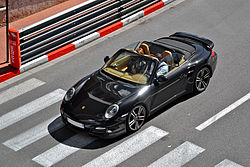 A convertible or cabriolet is an automobile body style that can convert between an open-air mode and an enclosed one, varying in degree and means by model. Convertibles evolved from the earlier phaeton, an open vehicle without glass side windows that may have had removable panels of fabric or other material for protection from the elements.

Historically, a retractable roof consisted of an articulated frame covered with a folding textile-based fabric similar to that on an open carriage evolved into the most common form. A lesser seen detachable hardtop provided a more weatherproof and secure alternative. As technology improved a retractable hardtop which removes and stows its own rigid roof in its trunk appeared, increasingly becoming the most popular form.

A semi-convertible also known as a cabrio coach has a retractable or removable top which retains fully framed windows on its doors and side glass. A landaulet is a semi-enclosed convertible with a fully enclosed front cabin and an open rear, typically with a folding fabric top and roll-down glass all round.

In Template:Lang-en-GB were used for the body style known as the "convertible" in the United States.[1] Other common terms include cabriolet, cabrio, soft top, drop top, rag top, spider, and spyder.

There is rarely consistency about the use of cabriolet in preference to convertible,[2] and the former term can not be equated with the cabrio coach term mentioned above that originates from "a light, two-wheeled, one-horse carriage with a folding top, capable of seating two persons."[3]

The collapsible textile roof section (of cloth or vinyl) over an articulated folding frame may include linings such as a sound-deadening layer or interior cosmetic headliner (to hide the frame)  – or both – and may have electrical or electro-hydraulic mechanisms for raising the roof. The erected top secures to the windshield frame header with manual latches, semi-manual latches, or fully automatic latches. The folded convertible top is called the stack. 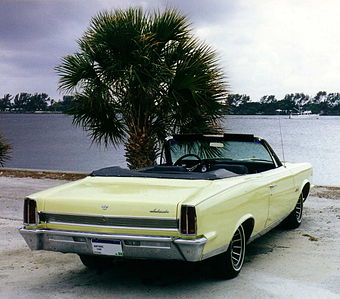 Among the advantages of convertible tops are:

Disadvantages of fabric top convertibles include: 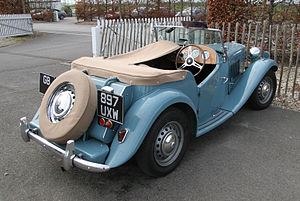 Folding textile convertible tops often fail to completely hide their internal mechanism or can expose their vulnerable underside to sun exposure and fading. A tonneau cover provides a solution.

There are a range of available materials for soft tops.

By 1955, the most popular materials were latex and butyl rubber fabrics that each accounted for approximately 35% of the convertible top poundage with others included vinyl (12%), jute (8%), as well as rayon and acrylic fibers (Orlon), amounting to about 1% each in the compositions.[7]

PVC: Polyvinyl chloride (PVC) material was used for many convertible tops. The material consists of two layers: a top layer made of PVC, which has a specific structure depending on the vehicle model, and a lower layer made of fabric (usually cotton).

Haartz cloth: Almost all automakers currently use one of a variety of fabric construction and designs produced by Haartz, a major supplier of soft top fabrics, for their new and more expensive convertibles.[8]

Side windows non-existent in open cars which may have detachable side screens, are manually or power operated glass side windows as in a saloon or sedan. Rear-windows have evolved similarly, with plastic rear-windows appearing as late as the first generation Porsche Boxster. Contemporary convertibles and retractable hardtops feature heatable glass rear windows to maximize visibility – though rear windows often can compromise visibility by their size, as with the case of the very small rear window and restricted visibility of the Mitsubishi Eclipse Spyder. Plastic windows can degrade, fade, yellow and crack over time, diminishing visibility.

According to the engineer responsible for the 2008 Chrysler Sebring, its windblocker reduces wind noise by approximately 11 to 12 dB.[9]

Mercedes and Audi currently offer a heating duct to the neck area of the seat on SLK, SL, and A5/S5 models marketed as an "Air Scarf".

Windblockers are also available on the aftermarket for use on convertibles that do not have them.

Contemporary convertible design may include such features as electrically heated glass rear window (for improved visibility), seat belt pre-tensioners, boron steel reinforced A-pillars, front and side airbags, safety cage construction – a horseshoe like structure around the passenger compartment – and roll over protection structures or (ROPS) with pyrotechnically charged roll hoops hidden behind the rear seats that deploy under roll-over conditions whether the roof is retracted or not.

The Volvo C70 retractable hardtop includes a door-mounted side impact protection inflatable curtain which inflates upward from the interior belt-line – vs. downward like the typical curtain airbag.[10] The curtain has an extra stiff construction with double rows of slats that are slightly offset from each other. This allows them to remain upright and offer effective head protection even an open window. The curtain also deflates slowly to provide protection should the car roll over.

Roadster: A roadster was an open two-seater possibly with a frame that required actual assembly (i.e., not retracting) and separately installable soft side "window" panels – offering little protection from inclement weather and often requiring time-consuming apparently complicated installation. Examples range from the very first cars to the vintage Porsche Speedster introduced in 1955, and the Jaguar XK120 Roadster unveiled in 1948 right up to the most recent Porsche Spyders. For most in the U.S., a contemporary roadster is a two-seater convertible such as the Jaguar F-Type, BMW Z8, Aston Martin V8 Vantage, and Dodge Viper.

Landau & Rigid Door: Citroën's 1948 Citroën 2CV featured a sunroof that rolled back on itself, and extended to the rear bumper in place of a separate boot/trunk lid. This was for loading versatility that pre-dated hatchbacks. Later models had a boot/trunk lid or an optional hatchback, and an internally opening sunroof, with a secured 'half-open' position. It had rigid body sides framing two doors on each side – followed in concept by such cars as the 1950 Nash Rambler Convertible Coupe.

Citroën marketed the C3 Pluriel (Pluriel is a cognate with the English plural), which can be configured into five iterations, hence the name:[11]

Peugeot presented the a concept four-door retractable hardtop convertible, the Peugeot 407 Macarena in 2006.[15] Produced by French coachbuilding specialist Heuliez, the Macarena's top can be folded in 60 seconds,[15] with a steel reinforcing beam behind the front seats incorporating LCD screens for the rear passengers into the crossmember.[15]

Drophead Coupe, Coupé Cabriolet or Coupé Cabrio: A type of convertible with only two doors,[16] and thereby recalling the cabriolet carriage. With its Mazda RX7 convertible, Mazda introduced a two-seater convertible with a removable rigid section over the passengers, removable independently of power operated textile section behind with heatable glass rear window. During the 1980s, Jaguar produced an XJ-SC with two removable panels over the front seats and a partial fold-down convertible section in the back. It retained the rear side windows of the coupe and had fixed cant rails above these and the door glass. This allowed an almost full convertible with roll-over safety. Going back in Jaguar history, during the 1950s the XK 120 Drophead Coupe (DHC) and later variants, provided open-air motoring with quite civilized fully lined insulated tops with the weather-protection of the hardtop models.

Another type of convertibles is the off-road vehicles with removable soft tops such as Jeep Wrangler, Suzuki Escudo, Ford Bronco, Land Rover Defender, Mercedes-Benz G-Class, early models of Toyota Land Cruiser, Land Rover Defender etc. All these models are available with various types of soft tops that attach to the roll cage or to the installation points on the vehicle's body. There are soft tops with glass, plastic or flexible vinyl windows. The common off-road soft top types are: full soft top (covers the interior, doors and includes windows), halftops (cover the space above the front seats, doors with windows, backdrop behind the front seats and stretch over the rear seats and cargo area), bikini tops (cover the roof area above the interior and cargo compartment, or just the space above the front seats).

The earliest automobiles were all open. By the end of the nineteenth century folding textile or leather rooves, as had been used on victoria or landau carriages, were being used on some automobile bodies. The first automobile offered with an enclosed body was the Renault Type B from 1899.

Less expensive cars were usually open. Whether these were economical runabouts, sporting roadsters or phaetons, or sturdy touring cars, their weather protection was similar, varying from none at all to a rudimentary folding top and detachable side curtains.

In the 1920s, when steel bodies began to be mass-produced, closed cars became available to the average buyer and fully open cars began their disappearance from the mainstream market. Convertibles, being cars that could convert from being open to being fully closed, entered the market in the mid-1920s.

United States automakers manufactured a broad range of models during the 1950s and 1960s – from economical compact-sized models such as the Rambler American[17] and the Studebaker Lark, to the more expensive models such as the Packard Caribbean, Oldsmobile 98, and Imperial by Chrysler.

Proposed major safety standards suggested during the mid-1970s for the 1980 model year included a 50-mile-per-hour (80 km/h) crash to the front, at 25 mph (40 km/h) on the sides, as well as a rollover at 30 miles per hour (48 km/h), a test that open top convertibles would unlikely be able to pass. Although the requirements were reduced, sales of convertible body styles were falling during the early-1970s. Automobile air conditioning systems were also becoming popular. In 1976, Cadillac marketed the Eldorado as "the last of the American Convertibles". During this period of low convertible production, T-tops became an alternative for a few models.

Elsewhere globally, convertible production continued throughout this era with models such as the Mercedes SL, the VW Beetle Cabriolet, and the VW Golf Cabriolet.

In the 1980s convertibles such as the Chrysler LeBaron and Saab 900 revived the body style in the United States – followed by models such as the Mazda Miata, Porsche Boxster, Audi TT, and later retractable hardtop models. 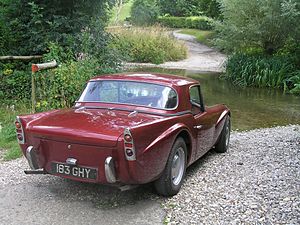 Rigid removable hardtops, many of which store in a car's trunk, have been around at least since the 1950s. These offer generally superior weatherproofing, soundproofing, and durability to fabric-based tops, some with integrated rear window defrosters and windscreens. Examples include the first and eleventh generation Ford Thunderbird, second and third generation Mercedes SL, Porsche Boxster, Jeep Wrangler, and Mazda MX-5. Many of the rigidity concerns of a standard convertible are present, even with the roof attached, although in the case of the early Daimler Dart SP250 cars, the hardtop does give some extra rigidity.[citation needed] However, weatherproofing, climate control, and cabin security are improved. 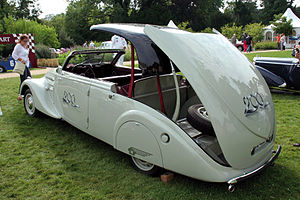 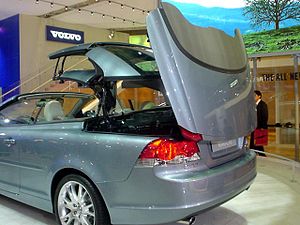 A Volvo C70 with retractable hardtop

Advances in electronics, hydraulics, and weatherproofing materials have made the modern retractable hardtop increasingly popular. Pros and cons include ease, enclosed car quality climate control with the top up, improved crash resistance, and passenger compartment storage security on the plus side and increased mechanical complexity and expense and, more often than not, reduced luggage capacity on the minus.

A 2006 New York Times article suggested the retractable hardtop may herald the demise of the textile-roofed convertible,[21] and a 2007 Wall Street Journal article suggested "more and more convertibles are eschewing soft cloth tops in favor of sophisticated folding metal roofs, making them practical in all climates, year-round."[22]

Retractable hardtops can vary in material (steel, plastic or aluminum), can vary from two to five in the number of rigid sections and often rely on complex dual-hinged trunk (British: boot) lids that enable the trunk lid to both receive the retracting top from the front and also receive parcels or luggage from the rear – along with complex trunk divider mechanisms to prevent loading of luggage that would conflict with the operation of the hardtop.