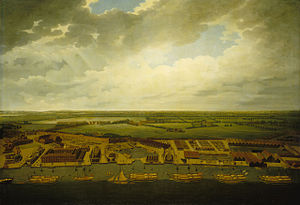 Convoys Wharf, formerly called the King's Yard,[1] is the site of Deptford Dockyard, the first of the Royal Dockyards, built on a riverside site in Deptford, by the River Thames in London. It was first developed in 1513 by Henry VIII to build vessels for the Royal Navy. Convoys Wharf also covers most of the site of Sayes Court manor house and gardens,[2] home of diarist John Evelyn.

The site was owned until 2008 by News International, which used it to import newsprint and other paper products from Finland until early 2000. It is now owned by Hutchison Whampoa Limited and is subject to a planning application to convert it into residential units,[3] although a large part of the site has safeguarded wharf status.[4]

The King's Yard was established in 1513 by Henry VIII as the first Royal Dockyard building vessels for the Royal Navy, and the leading dockyard of the period.[5][6] It brought a large population and prosperity to Deptford.[7]

The docks are also associated with the knighting of Sir Francis Drake by Queen Elizabeth I aboard the Golden Hind,[8] the legend of Sir Walter Raleigh laying down his cape for Elizabeth,[9] Captain James Cook's third voyage aboard Resolution,[10] Frobisher’s and Vancouver’s voyages of discovery, despatching ships against the Spanish Armada,[11] as well as for Nelson’s battles including Trafalgar.[12]

In 1698 Tsar Peter I of Russia aged 25, came to Deptford to learn about shipbuilding and seamanship. He was granted the use of John Evelyn’s Sayes Court, adjoining the Royal Dockyard, by William III. In three months he and his party caused considerable damage to the famous[13][14] gardens, and also to the house, with "much of the furniture broke, lost or destroyed". Sir Christopher Wren was instructed to survey the property and declared it "entirely ruined".[15] At the mouth of Deptford Creek, on the Fairview Housing estate, there is a statue, designed by Mihail Chemiakin and gifted by Russia commemorating Peter's visit.

By the 18th century, due to the silting of the Thames, the dockyard's use was restricted to ship building and distributing stores to other yards and fleets abroad. It was shut down from 1830 to 1844[5] and in 1864 a Parliamentary Committee recommended that the dockyards at Deptford (and Woolwich) should be closed. Their recommendation was accepted and the Deptford dockyard was closed in May 1869,[16] by which time it employed 800 people. It had produced some 450 ships, the last being the wooden screw corvette HMS Druid launched in 1869.[7] 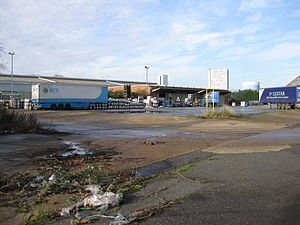 The location of Sayes Court almshouses in 2009 (compare this to a photo taken in 1910 from a similar direction.

Before refrigeration cattle had to be imported alive, and the Contagious Diseases (Animals) Act 1869 gave the City of London Corporation exclusive local authority for foreign animal imports and processing subject to its opening a market before January 1872.

During the War years

The Foreign Cattle Market was taken over by the War Department in 1914, on a tenancy agreement from the City of London Corporation, for use as the Royal Army Service Corps Supply Reserve Depot.[17] On several occasions after the Armistice traders and others urged that the market should be reopened, however in 1924[19] the War Office exercised their option to buy it[18][20] along with the adjacent the Sayes Court property for £400,500 (£NaN in 2022),[21] under deeds dated 25 March 1926, 18 March 1927 & 25 July 1927 including the railway, tramway, wharfage and jetty rights and easements.[17]

The yard also served as a United States' Advance Amphibious Vehicle base and married quarters during the Second World War.[12][22]

Most of the Tudor, Stuart, Georgian and Victorian structures above ground level that had survived until 1955 have since been destroyed. One structure that escaped the demolition is Olympia Warehouse, a unique cast-iron building constructed in the 1840s.[25] However archaeological surveys carried out by CgMs and Pre-Construct Archaeology in 2000 by Duncan Hawkins, in 2000 by Jon Lowe and in 2001 by David Divers, established that by far the greater part of the dockyard survives as buried structures filled in intact between 1869 and 1950. The structures of the yard proper, the docks, slips, basins, mast ponds, landing places and stairs, constitute a substantial architectural fabric that is currently extant, though largely invisible, being covered by superficial accretion or infill.[12] As yet there has been no archaeological investigation of the garden area of Sayes Court, and only limited trial trenching of part of the manor house.[26]

The War Department hired the Sayes Court area and almshouses, from the City of London Corporation from 19 September 1914 to use as a Horse Transport Reserve Depot at a rental of £90 per annum (£NaN in 2022),[21][17] to enlarge its Supply Reserve Depot at the Foreign Cattle Market.[28]

From 15 December 1900 there was tramway access via Grove Street, to the Foreign Cattle Market, using their own Maudslay petrol locomotive. When the docks became an army depot the junction was relaid to standard gauge for direct connection to the LB&SCR.[29] There was as well, an internal narrow gauge tramway system. When the War Department took over, they introduced steam locomotives to work the tramways,[30][31] purchasing between 1915 and 1917, twelve oil-fired Warril type 18 in (457 mm) gauge locomotives from the Hunslet Engine Company.[32] In December 1920 the Government announced the sale of the equipment from the railway at the Deptford Meat Depot. In 1921 Sir Robert Walker purchased three locos and 75 wagons for the Sand Hutton Light Railway, and purchased a fourth 1927. By January 1938 of the remaining eight locos, seven were apparently still in existence at Deptford, but out of use.[30] 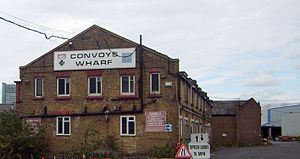 In 2002 News International applied to the London Borough of Lewisham for outline planning permission to erect 3,500 residential units on the site. Lewisham councillors resolved to approve the application in May 2005. The Grade II listed Olympia Warehouse will have to be preserved and refurbished as part of the redevelopment of the site.[25] New International engaged Richard Rogers to develop a masterplan for the site.[33] 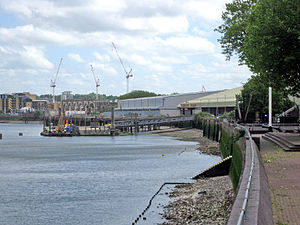 If the Mayor allows the application it will then be referred to the Secretary of State for Communities and Local Government. Reasons for such a referral would include a Government direction that half the site is safeguarded for freight use. Since freight wharves on the Thames were safeguarded in 1997 by the then Secretary of State for the Environment, John Gummer, only one operational wharf has been lost to residential use without a full public inquiry. This was Delta/Blackwall Wharf, a major aggregates wharf redeveloped as part of the Greenwich Peninsula masterplan.[citation needed]

On 18 May 2005 a 50/50 joint venture company of Cheung Kong Holdings and Hutchison Whampoa entered into an agreement to acquire Convoys Wharf, to develop it as a mixed residential and commercial project, with News International retaining a profit share in the sale of the luxury homes proposed.[34] In 2008 a new planning application was submitted by Hutchison based largely on the original Richard Rogers scheme.[35]

On 17 October 2013, Boris Johnson, the Mayor of London called in the application.[36] In January 2014 Lewisham Council's strategic planning committee recommended that the outline planning application for Convoys Wharf in its current form be rejected.[37][38]

On 22 January 2014 Dame Joan Ruddock challenged the government to recognise the unique heritage features of the site.[39]

In October 2000, 'Creekside Forum' set up the 'Convoys Opportunity' umbrella group in response to the News International Ltd plan to sell the 40-acre (160,000 m2) Convoys Wharf site.[40] Convoys Opportunity, composed of community organisations, churches, businesses and others in Deptford and beyond,[41] campaigned to have the News International scheme refused and the safeguarding order upheld.

In September 2011 a group of local residents launched a campaign, with the name Deptford Is.. to oppose the masterplan proposed by the developers. They have proposed a couple of projects to connect to the history of the area and benefit the local community. These are the Lenox project and Sayes Court Garden.[42]