File:Betty Crocker's Cook Book for Boys and Girls.djvu A cookbook (sometimes cookery book in Commonwealth English[1] or cook book) is a kitchen reference publication that typically contains a collection of recipes.

Modern versions may also include colorful illustrations and advice on purchasing quality ingredients or making substitutions. Cookbooks can also cover a wide variety of topics, including cooking techniques for the home, recipes and commentary from famous chefs, institutional kitchen manuals, and cultural commentary. 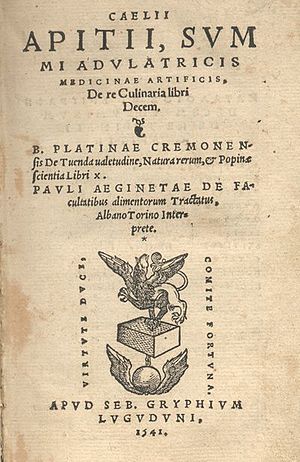 Apicius, De re culinaria, an early collection of recipes.

The earliest cookbooks on record seem to be mainly lists of recipes for what would now be called haute cuisine, and were often written primarily to either provide a record of the author's favorite dishes or to train professional cooks for banquets and upper-class, private homes. Many of these cookbooks, therefore, provide only limited sociological or culinary value, as they leave out significant sections of ancient cuisine such as peasant food, breads, and preparations such as vegetable dishes too simple to warrant a recipe.

The earliest collection of recipes that has survived in Europe is De re coquinaria, written in Latin. An early version was first compiled sometime in the 1st century and has often been attributed to the Roman gourmet Marcus Gavius Apicius, though this has been cast in doubt by modern research. An Apicius came to designate a book of recipes. The current text appears to have been compiled in the late 4th or early 5th century; the first print edition is from 1483. It records a mix of ancient Greek and Roman cuisine, but with few details on preparation and cooking.[2]

An abbreviated epitome entitled Apici Excerpta a Vinidario, a "pocket Apicius" by Vinidarius, "an illustrious man",[3] was made in the Carolingian era.[4] In spite of its late date it represents the last manifestation of the cuisine of Antiquity.

The earliest cookbooks known in Arabic are those of al-Warraq (an early 10th-century compendium of recipes from the 9th and 10th centuries) and al-Baghdadi (13th century).[5]

Chinese recipe books are known from the Tang Dynasty, but most were lost.[citation needed] One of the earliest surviving Chinese-language cookbooks is Hu Sihui's "Yinshan Zhengyao" (Important Principles of Food and Drink), believed to be from 1330. Hu Sihui, Buyantu Khan's dietitian and therapist, recorded a Chinese-inflected Central Asian cuisine as eaten by the Yuan court; his recipes were adapted from foods eaten all over the Mongol Empire.[6]

After a long interval, the first recipe books to be compiled in Europe since Late Antiquity started to appear in the late thirteenth century. About a hundred are known to have survived, some fragmentary, from the age before printing.[7] The earliest genuinely medieval recipes have been found in a Danish manuscript dating from around 1300, which in turn are copies of older texts that date back to the early 13th century or perhaps earlier.[8]

Low and High German manuscripts are among the most numerous. Among them is Daz buch von guter spise ("The Book of Good Food") written c. 1350 in Würzberg and Kuchenmeysterey ("Kitchen Mastery"), the first printed German cookbook from 1485.[9] Two French collections are probably the most famous: Le Viandier ("The Provisioner") was compiled in the late 14th century by Guillaume Tirel, master chef for two French kings; and Le Menagier de Paris ("The Householder of Paris"), a household book written by an anonymous middle class Parisian in the 1390s.[10]

From Southern Europe there is the 14th century Valencian manuscript Llibre de Sent Soví(1324), the Catalan Llibre de totes maneres de potatges de menjar ("The book of all recipes of dishes) and several Italian collections, notably the Venetian mid-14th century Libro per Cuoco,[11] with its 135 recipes alphabetically arranged. The printed De honesta voluptate ("On honourable pleasure"), first published in 1475, is one of the first cookbooks based on Renaissance ideals, and, though it is as much a series of moral essays as a cookbook, has been described as "the anthology that closed the book on medieval Italian cooking".[12]

Recipes originating in England include the earliest recorded recipe for ravioli (1390s) and Forme of Cury, a late 14th-century manuscript written by chefs of Richard II of England.[13] 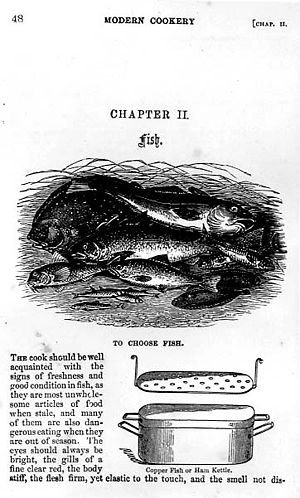 With the advent of the printing press in the 16th and 17th centuries, numerous books were written on how to manage households and prepare food. In Holland[14] and England[15] competition grew between the noble families as to who could prepare the most lavish banquet. By the 1660s, cookery had progressed to an art form and good cooks were in demand. Many of them published their own books detailing their recipes in competition with their rivals.[16] Many of these books have now been translated and are available online.[17]

By the 19th century, the Victorian preoccupation for domestic respectability brought about the emergence of cookery writing in its modern form. Although eclipsed in fame and regard by Isabella Beeton, the first modern cookery writer and compiler of recipes for the home was Eliza Acton. Her pioneering cookbook, Modern Cookery for Private Families published in 1845, was aimed at the domestic reader rather than the professional cook or chef. This was an immensely influential book, and it established the format for modern writing about cookery.

The publication introduced the now-universal practice of listing the ingredients and suggested cooking times with each recipe. It included the first recipe for Brussels sprouts.[18] Contemporary chef Delia Smith is quoted as having called Acton "the best writer of recipes in the English language."[19] Modern Cookery long survived her, remaining in print until 1914 and available more recently in facsimile reprint. 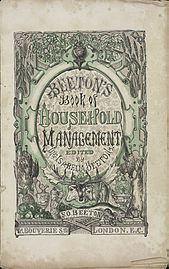 Acton's work was an important influence on Isabella Beeton,[20] who published Mrs Beeton's Book of Household Management in 24 monthly parts between 1857 and 1861.

The book was a guide to running a Victorian household, with advice on fashion, child care, animal husbandry, poisons, the management of servants, science, religion, and industrialism.[21][22]

Of the 1,112 pages, over 900 contained recipes, such that another popular name for the volume is Mrs Beeton's Cookbook. Most of the recipes were illustrated with coloured engravings, and it was the first book to show recipes in a format that is still used today. It is said that many of the recipes were actually plagiarised from earlier writers (including Eliza Acton), but the Beetons never claimed that the book's contents were original.

It was intended as a guide of reliable information for the aspirant middle classes. Mrs Beeton is perhaps described better as its compiler and editor than as its author, many of the passages clearly being not her own words.

Cookbooks that serve as basic kitchen references (sometimes known as "kitchen bibles") began to appear in the early modern period. They provided not just recipes but overall instruction for both kitchen technique and household management. Such books were written primarily for housewives and occasionally domestic servants as opposed to professional cooks, and at times books such as The Joy of Cooking (USA), La bonne cuisine de Madame E. Saint-Ange (France), The Art of Cookery (UK, USA), Il cucchiaio d'argento (Italy), and A Gift to Young Housewives (Russia) have served as references of record for national cuisines. Related to this class are instructional cookbooks, which combine recipes with in-depth, step-by-step recipes to teach beginning cooks basic concepts and techniques. In vernacular literature, people may collect traditional recipes in family cookbooks.

International and ethnic cookbooks fall into two categories: the kitchen references of other cultures, translated into other languages; and books translating the recipes of another culture into the languages, techniques, and ingredients of a new audience. The latter style often doubles as a sort of culinary travelogue, giving background and context to a recipe that the first type of book would assume its audience is already familiar with.

Professional cookbooks are designed for the use of working chefs and culinary students and sometimes double as textbooks for culinary schools. Such books deal not only in recipes and techniques, but often service and kitchen workflow matters. Many such books deal in substantially larger quantities than home cookbooks, such as making sauces by the liter or preparing dishes for large numbers of people in a catering setting. While the most famous of such books today are books like Le guide culinaire by Escoffier or The Professional Chef by the Culinary Institute of America, such books go at least back to medieval times, represented then by works such as Taillevent's Viandier and Chiquart d'Amiço's Du fait de cuisine.

Single-subject books, usually dealing with a specific ingredient, technique, or class of dishes, are quite common as well. Jack Monroe for example features low budget recipes. Some imprints such as Chronicle Books have specialized in this sort of book, with books on dishes like curries, pizza, and simplified ethnic food. Popular subjects for narrow-subject books on technique include grilling/barbecue, baking, outdoor cooking, and even recipe cloning (Recipe cloning is copying commercial recipes where the original is a trade secret[24]).

Community cookbooks (also known as compiled, regional, charitable, and fund-raising cookbooks) are a unique genre of culinary literature. Community cookbooks focus on home cooking, often documenting regional, ethnic, family, and societal traditions, as well as local history.[25][26] Gooseberry Patch has been publishing community-style cookbooks since 1992 and built their brand on this community.

Cookbooks can also document the food of a specific chef (particularly in conjunction with a cooking show) or restaurant. Many of these books, particularly those written by or for a well-established cook with a long-running TV show or popular restaurant, become part of extended series of books that can be released over the course of many years. Popular chef-authors throughout history include people such as Delia Smith, Julia Child, James Beard, Nigella Lawson, Edouard de Pomiane, Jeff Smith, Emeril Lagasse, Claudia Roden, Madhur Jaffrey, Katsuyo Kobayashi, and possibly even Apicius, the semi-pseudonymous author of the Roman cookbook De re coquinaria, who shared a name with at least one other famous food figure of the ancient world.

Famous cookbooks from the past, in chronological order, include:

Usage outside the world of food

The term cookbook is sometimes used metaphorically to refer to any book containing a straightforward set of already tried and tested "recipes" or instructions for a specific field or activity, presented in detail so that the users who are not necessarily expert in the field can produce workable results. Examples include a set of circuit designs in electronics, a book of magic spells, or The Anarchist Cookbook, a set of instructions on destruction and living outside the law. O'Reilly Media publishes a series of books about computer programming named the Cookbook series, and each of these books contain hundreds of ready to use, cut and paste examples to solve a specific problem in a single programming language.