Cookham is a village and civil parish in the north-easternmost corner of Berkshire in England, on the River Thames, notable as the home of the artist Stanley Spencer. It is 2 miles (3 km) north of Maidenhead close to the boundary with Buckinghamshire and forms part of the High Wycombe Urban Area. It has a population of 5,519.[1] In 2011 The Daily Telegraph deemed Cookham Britain's second richest village.[2]

The village's neighbours are Maidenhead to the south, Bourne End to the north, Marlow and Bisham to the west and Taplow to the east.

The River Thames flows past Cookham on its way from Marlow to Taplow, and forms the boundary with Buckinghamshire. Several islands in the Thames belong to Cookham, such as Odney Island, Formosa Island and Sashes Island which separates Cookham Lock from Hedsor Water. The Lulle Brook and the White Brook are tributaries of the River Thames which flow through the parish.

A good amount of common land remains in the parish, such as Widbrook Common, Cookham Dean Common and Cock Marsh. Winter Hill affords excellent views over the Thames Valley.

Cookham is also home to the Chartered Institute of Marketing, based in Moor Hall. The John Lewis Partnership, one of the country's premier retailers, which runs John Lewis department stores and Waitrose supermarkets, has a residential training and holiday centre based at Odney.

Cookham's municipal services are provided by the Royal Borough of Windsor and Maidenhead. Cookham also has a parish council made up of fifteen councillors assisted by a part-time parish clerk and an assistant. The local health services are managed by the East Berkshire PCT (Primary Care Trust) – NHS Services.

The ancient parish of Cookham covered all of Maidenhead north of the London and Bath Road until this area's severance in 1894. There were several manors: Cookham, Lullebrook, Elington, Pinkneys, Great Bradley, Bullocks, White Place and Cannon Court.

The area has been inhabited for thousands of years. There were several prehistoric burial mounds on Cock Marsh which were excavated in the 19th century and the largest stone axe ever found in Britain was one of 10,000 that has been dug up in nearby Furze Platt. The Roman road called the Camlet Way is reckoned to have crossed the Thames at Sashes Island, now cut by Cookham Lock, on its way from St. Albans to Silchester. By the 8th century there was an Anglo-Saxon abbey in Cookham and one of the later abbesses was Cynethryth, widow of King Offa of Mercia. It became the centre of a power struggle between Mercia and Wessex. Later King Alfred made Sashes Island one of his burhs to help defend against Viking invaders. There was a royal palace here[3] where the Witan met in 997.

Although the earliest stone church building may date from 750, the earliest identifiable part of the current Holy Trinity parish church is the Lady Chapel, which was built in the late 12th century on the site of the cell of a female anchorite who lived next to the church and was paid a halfpenny a day by Henry II.[5]

In the Middle Ages, most of Cookham was owned by Cirencester Abbey and the timber-framed 'Churchgate House' was apparently the Abbot's residence when in town. The "Tarry Stone" – still to be seen on the boundary wall of the Dower House – marked the extent of their lands.

In 1611 the estate at Cookham was the subject of the first ever country house poem, in Aemilia Lanyer's "Description of Cookham". In the poem 'Lanyer' pays tribute to her patroness, Margaret Clifford, Countess of Cumberland, through a description of her residence as a paradise for literary women. The estate at Cookham did not actually belong to Margaret Clifford, but was rented for her by her brother while Clifford was undergoing a dispute with her husband.

The town people have resisted many attempts to enclose parts of the common land, including by the vicar, Rev. Thomas Whateley in 1799, Miss Isabella Fleming in 1869 (who wanted to stop nude bathing at Odney) and the Odney Estates in 1928 who wanted to enclose Odney Common.[6] The Maidenhead and Cookham Commons Preservation Committee was formed and raised £2,738 to buy the manorial rights and the commons which were then donated to the National Trust by 1937. These included Widbrook, Cockmarsh, Winter Hill, Cookham Dean Commons, Pinkneys Green Common and Maidenhead Thicket.[7] 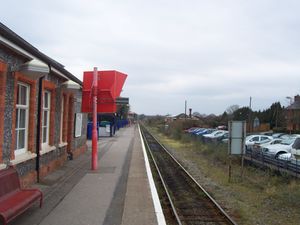 Cookham village is on the A4094 between Maidenhead and Bourne End. The A404 from Maidenhead to High Wycombe is just to the west of Cookham Dean.

Cookham railway station is at Cookham Rise, on the Marlow to Maidenhead branch line. There are two direct trains to and from London, Paddington during the morning and evening rush hour. The rest of the trains require a change at Maidenhead.

An hourly bus service to Maidenhead, Bourne End and High Wycombe is provided by Arriva Shires & Essex six days a week; on Sundays Courtney Coaches run a service from the village to Maidenehead and Bracknell. The river has a long stretch of moorings above Cookham Bridge.

The village is a tourist destination as it is a convenient base for a number of walks along the Thames Path and across National Trust property. There are a good selection of restaurants and pubs in the High Street. The Stanley Spencer Gallery, based in the former Methodist chapel, also has a permanent exhibition of the artist's works. 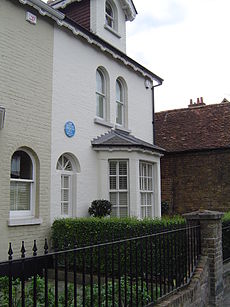 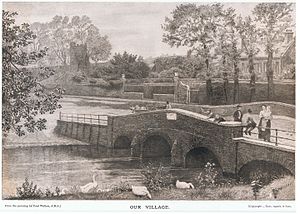 Some notable residents of Cookham are:

Cookham is twinned with: