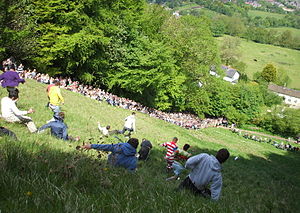 The Cooper's Hill Cheese-Rolling and Wake is an annual event held on the Spring Bank Holiday at Cooper's Hill, (grid reference SO892146) near Gloucester in England.[1] It is traditionally done by and for the people who live in the local village of Brockworth, but now people from all over the world take part. The Guardian called it a "world-famous event", and indeed, in 2013, a 27-year-old American man and a 39-year-old Japanese man each won one of the four races.[2] The event takes its name from the hill on which it occurs.

The event is traditional. Until recent years, it was managed in a quasi-official manner, but since 2010 the event has taken place spontaneously without any management.[3] 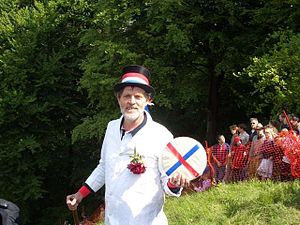 The MC holding the cheese.

From the top of the hill a 9 lb round of Double Gloucester cheese is rolled, and competitors start racing down the hill after it.[4] The first person over the finish line at the bottom of the hill wins the cheese. In theory, competitors are aiming to catch the cheese; however, it has around a one-second head start and can reach speeds up to 70 mph (112 km/h),[4] enough to knock over and injure a spectator. In the 2013 competition, a foam replica replaced the actual cheese for reasons of safety.[2] The winner was given the prize after the competition.

"The Cheese Rollers" pub in the nearby village of Shurdington, about 3 miles from Cooper's Hill, takes its name from the event. The nearest pubs to the event are The Cross Hands and The Victoria, both of which are in Brockworth, which competitors frequent for some pre-event Dutch courage or discussion of tactics, and after the event for convalescence.

This ceremony originally took place each Whit Monday before it later transferred to the Spring Bank Holiday. Two possible origins have been proposed for the ceremony. The first is said that it evolved from a requirement for maintaining grazing rights on the common.[5]

The second proposal is pagan origins for the custom of rolling objects down the hill. It is thought that bundles of burning brushwood were rolled down the hill to represent the birth of the New Year after winter. Connected with this belief is the traditional scattering of buns, biscuits and sweets at the top of the hill by the Master of Ceremonies. This is said to be a fertility rite to encourage the fruits of harvest.[5]

Each year the event becomes more and more popular with contestants coming from all across the world to compete or even simply to watch.[1] In 1993, fifteen people were injured, four seriously, chasing cheeses down the one in three hill.[5]

On 24 March 2010, the organisers blamed backlashes that included death threats following an announcement of how the 2011 event would be run. The plans had been made to conduct the event under mounting pressure from the local council who stipulated it should include security, perimeter fencing to allow crowd control and spectator areas that would charge an entrance fee. The event proceeded without management.

"No-one's going to stop us doing it. They say it's not official but we are all Brockworth people and we're running the cheese today so it is official. We strongly believe in it."

"Since we announced an entry fee, we have been bombarded with so much hostility and criticism, much of it at a personal level, including accusations of profiteering and some of the committee have even received threats."

The 2011 event took place without management due to safety concerns over the number of people visiting the event,[6] resulting in the 'Save the Cheese Roll' campaign.[7][8] Despite the cancellation and lack of paramedics, around 500 people showed up in 2010 to hold some spontaneous races, with six time champion Chris Anderson winning again. No major injuries were reported.

An annual cheese-rolling event has taken place in Chester since about 2002 to promote the town's food and drink festival. The rolling takes place on the flat down an obstacle course.[9] No injuries have been reported since 2006.

The cheese currently used in the event is 7–9 lb. Double Gloucester, a hard cheese traditionally made in a wheel shape.[10] Each is protected for the rolling by a wooden casing round the side and is decorated with ribbons at the start of the race. Formerly, three cheeses were presented by parishioners, and the cheeses were usually rolled by them. A collection is usually made now to purchase them as well as sweets and also to provide prize money.[5] The current supplier is local cheesemaker Diana Smart and her son Rod,[4] who have supplied the cheese since 1988.[11]

In May 2013, a police inspector warned the 86-year-old cheese maker Diana Smart that she could be held responsible for injuries.[4] Chief Superintendent Nigel Avron of Gloucestershire Police also made these comments: "If you are an organizer in some way or some capacity you could potentially be held liable for something that took place at that event".[4]

File:Coopers Hill.jpg
A view down Cooper's Hill, from the start point of the race to the finish (where the dog-walkers are). The face of the hill itself is concave and hence cannot be seen from this angle. The posts at the bottom are signs from the local council requesting that, to avoid soil erosion, people do not walk on the face of the hill. The posts are removed for the annual event.

Due to the steepness and uneven surface of the street there are usually a number of injuries. A first aid service is provided by the local St John Ambulance (Gloucester, Cheltenham and Stroud Divisions) at the bottom of the hill, with a volunteer rescue group on hand to carry down to them any casualties who do not end up at the bottom through gravity. A number of ambulance vehicles attend the event, since there is invariably at least one, and often several injuries requiring hospital treatment. Cooper's Hill Cheese Rolling has been summarised as "twenty young men chasing a cheese off a cliff and tumbling 200 yards to the bottom, where they are scraped up by paramedics and packed off to hospital."[12]