Copenhagen Municipality (Danish: Københavns Kommune), also known in English as the City of Copenhagen, is the largest of the municipalities which constitute the conurbation of Copenhagen. Broadly covering the historic city centre, it lies at the centre of Copenhagen and covers 86.4 square kilometres (33.4 sq mi) in area,[1] with a population of 591,481 (1 January 2016).[2]

The municipal seat of government is the Copenhagen City Hall (Danish: Københavns Rådhus). The Lord Mayor of Copenhagen is Frank Jensen, since 2010. The relationship between Copenhagen Municipality and the wider city of Copenhagen is one of an administrative unit within a significantly larger city. This is comparable to other capital cities which have outgrown their administrative centres, such as London and its ancient core, the City of London.

In the Middle Ages, Copenhagen was defined as the area enclosed within the city walls. The city centre lies in the area originally defined by the old ramparts, which are still referred to as the Fortification Ring (Fæstningsringen) and kept as a partial green band around it. In 1856 the ramparts were pulled down allowing for growth and expansion. In 1901 the city expanded to include Amager and Valby, while Frederiksberg became an enclave within the municipality. The Finger Plan in the second half of the 20th century led to expansion outside of the municipal boundary.

Copenhagen Municipality was one of the three last Danish municipalities not belonging to a county, the others being Frederiksberg Municipality and Bornholm. On 1 January 2007, the municipality lost its county privileges and became part of Region Hovedstaden (Capital Region).

Copenhagen Municipality is a political division covering the central city (Indre By) and certain additional areas. It encloses Frederiksberg Municipality and stretches east to the waterfront. Neighboring municipalities are Gentofte, Gladsaxe and Herlev to the north, Rødovre and Hvidovre to the west, and Tårnby to the south.

The City Hall Square (Danish: Rådhuspladsen) is the old centre of the city, from which an old shopping street leads northeast to Kongens Nytorv, which was laid out in the seventeenth century. Christiansborg Palace, which houses the Danish parliament, is located on the islet of Slotsholmen.

The municipality is divided into ten administrative, statistical and tax districts (Danish: bydele).:[4] 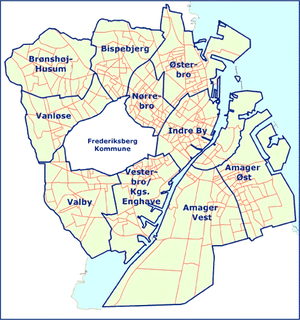 The suffix -bro in the names Østerbro, Nørrebro, Vesterbro and Amagerbro should not be confused with the Danish word for bridge, which is also bro. The term is thought to be an abbreviation or short form of the Danish word brolagt meaning "paved", referring to the roads paved with cobblestones leading to the city's former gates.

Historic population. The two figures for 1 February 1901 are before and after the municipality annexed some nearby parishes. The apparent decline since the mid-1900s are due to the figures not including the suburban and urban areas - notably Frederiksberg - outside Copenhagen municipality. 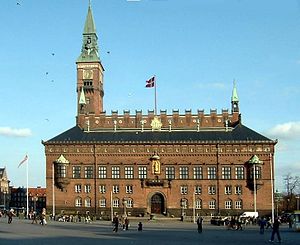 Copenhagen Municipality is distinct from the wider Copenhagen urban area. The seat of Copenhagen's municipal council is the Copenhagen City Hall (Rådhus). The council is chaired by the Lord Mayor—currently Frank Jensen—who oversees the civic duties of the fifty-five representatives of the council.[5] The council usually meets every other week at 17:30 on a Thursday.[5] They discuss a range of issues including labour and employment, business growth, economics, international cooperation and IT, urban planning, housing and construction, and young, old, and disabled peoples' issues, healthcare, and traffic, with a central focus on making the city sustainable and meeting environmental and health targets.[6]

All members of the council are elected every four years. In the municipal elections in November 2013 (see below), the Social Democrats remained in first place with 27.8% of the vote (down by 2.2% from 2009), while the Red-Green Alliance was in second place with 19.5%.[7][8] The Social Democrats have claimed the office of mayor for the past 110 years.[9]

The municipal government is divided into seven administrative departments: Employment and Integration, Culture and Leisure, Health and Care, Finance, Child and Youth, Social Services, and Technical and Environmental Administration.[10] It has six political committees and a finance committee. The annual budget for the city is proposed in August and finalized in October and the annual report is published in May of every year. The accounting firm Deloitte is responsible for auditing the City of Copenhagen's accounts.[11]

All lord mayors of Copenhagen have belonged to the Social Democratic party.[9]