The Society of the Friends of the Rights of Man and of the Citizen (French: Société des Amis des droits de l’homme et du citoyen), mainly known as Cordeliers Club (French: Club des Cordeliers), was a populist club during the French Revolution. 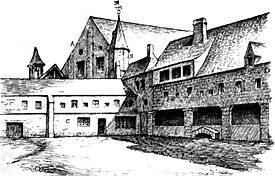 The Cordeliers Convent in 1793.

The club had its origins in the Cordeliers district, a famously radical area of Paris called, by Camille Desmoulins, "the only sanctuary where liberty has not been violated."[1] This district, under the leadership of Georges Danton, had played a significant role in the Storming of the Bastille, and was home to several notable figures of the Revolution, including Danton himself, Desmoulins, and Jean-Paul Marat - on whose behalf the district placed itself in a state of civil rebellion when, in January 1790, it refused to allow the execution of a warrant for his arrest that had been issued by the Châtelet.

Having issued, in November 1789, a declaration affirming its intent to "oppose, as much as we are able, all that the representatives of the Commune may undertake that is harmful to the general rights of our constituents,"[2] the Cordeliers district remained in conflict with the Parisian government throughout the winter and spring of 1790. In May and June 1790, the previous division of Paris into sixty districts was, by decree of the National Assembly, replaced by the creation of forty-eight sections. This restructuring abolished the Cordeliers district.

Anticipating this dissolution, the leaders of the Cordeliers district founded, in April 1790, the Société des Amis des droits de l’homme et du citoyen, a popular society which would serve as an alternative means of pursuing the goals and interests of the district. This society held its meetings in the Cordeliers Convent, and quickly became known as the Club des Cordeliers. It took as its motto the phrase, Liberté, égalité, fraternité.

The membership fees of this society were fixed low, and thus affordable to a more diverse range of citizens than those of many other political clubs at the time, including the Jacobin Club. There were no other restrictions on membership. The Cordeliers presented themselves as exceptionally populist; they prided themselves on counting working men and women among their members. A contemporary account describes one meeting:

"About three hundred persons of both sexes filled the place; their dress was so unkempt and so filthy that one would have taken them for a gathering of beggars. The Declaration of the Rights of Man was stuck on the wall, crowned by crossed daggers. Plaster busts of Brutus and William Tell were placed on each side, as if expressly to guard the Declaration. Facing, behind the tribune, as supporters, there appeared busts of Mirabeau and Helvétius, with Jean-Jacques Rousseau in the middle."[3]

However, the preponderance of Cordeliers were members of the bourgeoisie, and its leadership was largely drawn from the educated middle classes.[4]

On June 21, 1791, following an attempt by the royal family to flee Paris, the Cordeliers moved to draft a petition which offered the National Assembly a choice between the immediate deposition of Louis XVI or a national referendum on the future of the monarchy. The Cordeliers actively moved against the majority interests in this case. Large demonstrations in support of this and similar petitions led to civil unrest, and culminated in the Champs de Mars Massacre on July 17th. The National Guard, led by the Marquis de Lafayette fired on the protestors, resulting in the deaths of at least dozen of them. [5]Subsequent action taken against the Cordeliers included the closing of the Cordeliers Convent to them and the issuing of arrest warrants for Danton and Desmoulins. Despite these measures, the society remained a highly influential force in Parisian politics.

The Cordeliers participated significantly in the planning and execution of the August 10, 1792 insurrection. Danton, at this time perhaps the most powerful figure within the Cordeliers Club, acted, in Hilaire Belloc's words, as "the organizer and chief of the insurrection,"[6] and was appointed Minister of Justice in the government that resulted, with Desmoulins and Fabre d'Églantine - both prominent members of the Cordeliers Club - as his secretaries.

Subsequent to this insurrection, and to the September Massacres that followed closely on its heels, the Cordeliers Club became increasingly the province of ultra-revolutionary factions, particularly the Hébertists, who advocated extreme measures to intensify the Terror.

In December 1793, Desmoulins began publishing a journal entitled the Vieux Cordelier or "Old Cordelier," which attempted to reclaim the title of the society from those who had associated it with extremism. In the seven numbers of the journal, Desmoulins attacked the Hébertists and called for an end to the Terror, comparing revolutionary Paris to Rome under the tyrants. The Hébertists were arrested, and, on March 24, 1794, executed; however, Desmoulins, Danton, and the "Old Cordeliers" of the "indulgent" Dantonist faction quickly followed them to the guillotine, effectively ending the era of the Cordeliers Club.