The Corinth Canal (Greek: Διώρυγα της Κορίνθου, Dhioryga tis Korinthou) is a canal that connects the Gulf of Corinth with the Saronic Gulf in the Aegean Sea. It cuts through the narrow Isthmus of Corinth and separates the Peloponnese from the Greek mainland, thus effectively making the former peninsula an island. The builders dug the canal through the Isthmus at sea level; no locks are employed. It is 6.4 kilometres (4 mi) in length and only 21.4 metres (70 ft) wide at its base, making it impassable for most modern ships. It now has little economic importance.

The canal was mooted in classical times and an abortive effort was made to build it in the 1st century AD. Construction finally got under way in 1881 but was hampered by geological and financial problems that bankrupted the original builders. It was completed in 1893 but, due to the canal's narrowness, navigational problems and periodic closures to repair landslides from its steep walls, it failed to attract the level of traffic expected by its operators. It is now used mainly for tourist traffic. 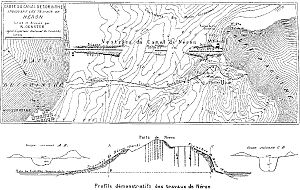 Remains of Nero's canal project in 1881

Several rulers in antiquity dreamed of digging a cutting through the Isthmus. The first to propose such an undertaking was the tyrant Periander in the 7th century BC. The project was abandoned and Periander instead constructed a simpler and less costly overland portage road, named the Diolkos or stone carriageway, along which ships could be towed from one side of the isthmus to the other.[2][3][4][5][6] Periander's change of heart is attributed variously to the great expense of the project, a lack of labour or a fear that a canal would have robbed Corinth of its dominant role as an entrepôt for goods.[7] Remnants of the Diolkos still exist next to the modern canal.[8][9][7]

The Diadoch Demetrius Poliorcetes (336–283 BC) planned to construct a canal as a means to improve his communication lines, but dropped the plan after his surveyors, miscalculating the levels of the adjacent seas, feared heavy floods.[7][10]

The philosopher Apollonius of Tyana prophesied that ill would befall anyone who proposed to dig a Corinthian canal. Three Roman rulers considered the idea but all suffered violent deaths; the historian Suetonius tells us that the Roman dictator Julius Caesar considered digging a canal through the isthmus but was assassinated before he could commence the project.[11] Caligula, his successor as the third Roman Emperor, commissioned a study in AD 40 from Egyptian experts who claimed incorrectly that the Corinthian Gulf was higher than the Saronic Gulf. As a result, they concluded, if a canal was dug the island of Aegina would be inundated. Caligula's interest in the idea got no further as he too was assassinated.[12]

The emperor Nero was the first to actually attempt to construct the canal, personally breaking the ground with a pickaxe and removing the first basket-load of soil in AD 67,[13] but the project was abandoned when he died shortly afterwards. The Roman workforce, consisting of 6,000 Jewish prisoners of war, started digging 40–50 m (130–160 ft) wide trenches from both sides, while a third group at the ridge drilled deep shafts for probing the quality of the rock (which were reused in 1881 for the same purpose).[10] According to Suetonius, the canal was dug to a distance of four stades (approximately 700 metres (2,300 ft), in other words about a tenth of the total distance across the isthmus). A memorial of the attempt in the form of a relief of Hercules was left by Nero's workers and can still be seen in the canal cutting today.[14] Other than this, as the modern canal follows the same course as Nero's, no remains have survived.[7]

The philosopher and Roman senator Herodes Atticus is also known to have considered digging a canal in the 2nd century AD, but did not manage to get a project under way.[15] The Venetians also considered it in 1687 after their conquest of the Peloponnese but likewise did not initiate a project.[16]

Construction of the modern canal 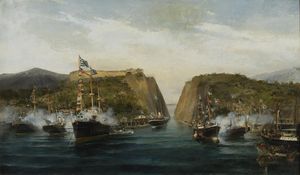 The Inauguration of the Corinth Canal (1893) by Konstantinos Volanakis. 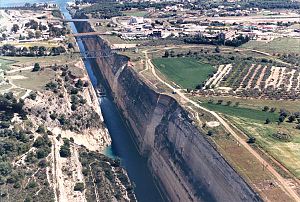 The Corinth Canal seen from the air 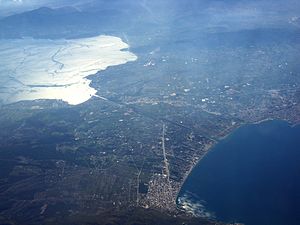 The idea of a Corinth Canal was revived after Greece gained formal independence from the Ottoman Empire in 1830. The Greek statesman Ioannis Kapodistrias asked a French engineer to assess the feasibility of the project but had to abandon it when its cost was assessed at some 40 million gold francs—far too expensive for the newly independent country. Fresh impetus was given by opening of the Suez Canal in 1869 and the following year, the government of Prime Minister Thrasyvoulos Zaimis passed a law authorising the construction of a Corinth Canal. French entrepreneurs were put in charge but, following the bankruptcy of the French company that dug Panama Canal, French banks refused to lend money and the company went bankrupt too. A fresh concession was granted to the Société Internationale du Canal Maritime de Corinthe in 1881, which was commissioned to construct the canal and operate it for the next 99 years. Construction was formally inaugurated on 23 April 1882 in the presence of King George I of Greece.[17]

The company's initial capital was some 30,000,000 francs, but after eight years of work it ran out of money and a bid to issue 60,000 bonds of 500 francs each flopped when less than half of the bonds were sold. The company's head, the Hungarian István Türr, went bankrupt, as did the company itself and a bank that had agreed to raise additional funds for the project.[18] Construction resumed in 1890 when the project was transferred to a Greek company, and was finally completed on 25 July 1893 after eleven years' work.[17]

The canal experienced financial and operational difficulties after completion. The narrowness of the canal makes navigation difficult; its high rock walls channel high winds down its length, and the different times of the tides in the two gulfs cause strong tidal currents in the channel. For these reasons, many ship operators did not bother to use the canal and traffic was far below what had been predicted. An annual traffic of just under 4 million net tons had been anticipated but by 1906 traffic had reached only half a million net tons annually. By 1913 the total had risen to some 1.5 million net tons, but the disruption caused by the First World War produced a major decline in traffic.[18]

Another persistent problem was due to the heavily faulted nature of the sedimentary rock, in an active seismic zone, through which the canal is cut.[19] The canal's high limestone walls have been persistently unstable from the start. Although it was formally opened in July 1893 it was not opened to navigation until the following November, due to landslides. It was soon found that the wake from ships passing through the canal undermined the walls, causing further landslides. This required further expense in building retaining walls along the water's edge for somewhat more than half of the length of the canal, utilising some 165,000 cubic metres of masonry.[20] Between 1893 and 1940, it was closed for a total of four years for maintenance to stabilise the walls. In 1923 alone, 41,000 cubic metres of material fell into the canal, which took two years to clear out.[21]

Serious damage was caused to the canal during World War II, when it was the scene of fighting due to its strategic importance. On 26 April 1941, during the Battle of Greece between defending British troops and the invading forces of Nazi Germany, German parachutists and glider troops attempted to capture the main bridge over the canal. The bridge was defended by the British and had been wired for demolition. The Germans were able to surprise the defenders with a glider-borne assault in the early morning of 26 April and captured the bridge, but the British were able to set off the charges and destroy the structure.[22] Other authors maintain that German pioneers did cut the cables, thus securing the bridge, and it was a lucky shell by British artillery that triggered the explosion.[23][24]

Three years later, as German forces retreated from Greece, the canal was put out of action by German "scorched earth" operations. German forces used explosives to set off landslips to block the canal, destroyed the bridges and dumped locomotives, bridge wreckage and other infrastructure into the canal to hinder repair work. The United States Army Corps of Engineers began work to clear the canal in November 1947 and managed to reopen it for shallow-draft traffic by 7 July 1948, and for all traffic by that September.[25] 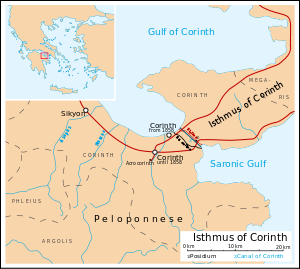 The location of the Isthmus of Corinth; the canal is shown in light blue.

Although the canal saves the 700-kilometre (430 mi) journey around the Peloponnese, it is too narrow for modern ocean freighters, as it can only accommodate ships of a width of up to 17.6 metres (58 ft) and a draft of 7.3 metres (24 ft). Ships can only pass through the canal one convoy at a time on a one-way system. Larger ships have to be towed by tugs.[28] The canal is nowadays mostly used by tourist ships; 11,000 ships per year travel through the waterway.