The School of Hotel Administration (SHA) at Cornell University is a specialized business school[2] for hospitality management founded in 1922 as the first four-year intercollegiate school in the world devoted to the field. It is one of a few hospitality management schools in the country that is not part of another academic department, school, or college, though until 1950, it was operated as a department within the New York State College of Home Economics. The undergraduate business curriculum at the School of Hotel Administration is one of only three such Ivy League programs accredited by the Association to Advance Collegiate Schools of Business (AACSB) including the University of Pennsylvania's Wharton School of Business, Cornell University's Dyson Applied Economics and Management program, and Cornell University's School of Hotel Administration.[3] Cornellians generally refer to it as the Hotel School, and its students and alumni as Hotelies.[4] 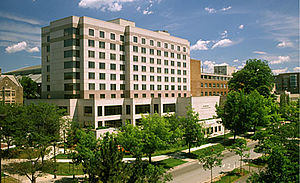 The School of Hotel Administration

The nature of SHA was in large part the creation of professor Howard B. Meek. He was supported in his efforts by New York City hotel men, a number of whom testified in Albany, urging the legislature to appropriate $11,000 per year for the school. Edward M. Tierney of the Ansonia Hotel stated "There is a dearth of competent hotel employes [sic], and such a course at Cornell would have the endorsement and co-operation of the hotel men generally throughout the country... The war brought a great change in the hotel worker, and the old-time attitude of servility has been replaced by efficient service giving and courtesy. Young men now enter the hotel business just as they would banking, railroad, or commercial life, to find a future in it, and the hotel man must offer the same attractions of commensurate pay and advancement."

In 1927, at the 2nd Annual Hotel Ezra Cornell, Meek convinced a skeptical Ellsworth Milton Statler of the value of the concept; Statler declared "I'm converted. Meek can have any damn thing he wants." Statler and his wife became major benefactors of the school, eventually donating a total of more than $10 million. In 1950, the school was transformed from being a part of a statutory college into becoming an endowed unit of Cornell.

In 1948, the Statler Foundation funded the construction of a 50-room Statler Inn and the adjoining class-room building called Statler Hall. The building also housed Cornell's faculty club. The 750-seat Alice Statler Auditorium was added to the southern end in 1956.[5] In 1986, the original Statler Inn was torn down and replaced with the current 150-room Statler Hotel & J. Willard Marriott Executive Education Center. The Statler Hotel underwent another renovation in 2006 and now has 153 guest rooms. The Statler Hotel is the only hotel on campus.

The school enrolled 895 undergraduates and 67 graduate students in 2011, hailing from almost 50 countries; it is Cornell's second smallest undergraduate college. Its curriculum encompasses all facets of general business management with a focus on the hospitality industry. Although not required, many students choose to work at the Statler Hotel to supplement their education at the school. SHA employs 65 full-time faculty members, most with field management experience.

In 1954, Conrad Hilton, who was closely associated with the school after his company bought the Statler hotel chain, called it "the greatest hotel school in the world."[6] Conrad Hilton later became more closely associated with another school after he founded the Hilton College of Hotel and Restaurant Management at the University of Houston in 1969.

Experiential education is prevalent in the SHA curriculum. Hands-on learning opportunities include:

Through its centers, institutes, and more than 100 corporate partnerships, SHA brings together hospitality business leaders, scholars, and entrepreneurs. The Center for Real Estate and Finance promotes student education and serves the real estate and finance industry. The Center for Hospitality Research creates and shares new knowledge with the industry and also promotes and encourages student research. The Pillsbury Institute for Hospitality Entrepreneurship supports students' drive to become entrepreneurs. The Cornell Institute for Hospitality Labor and Employment Relations provides a platform for students, employers, employees, unions and their advocates to understand and to improve hospitality labor and employment relations.

In a 2007 Newsweek article dubbing Cornell the "Hottest Ivy", SHA was mentioned to be "considered the world's best."[7]

Participants come from all over the world to take classes at such locations as Ithaca, New York; Brussels, Belgium; Singapore; and site visits in Las Vegas and New York City.[8]

File:StatlerLobby.jpg
Lobby and students at the Statler Hotel

The full-service Statler Hotel has 153 guest rooms at the center of Cornell's campus. The hotel also serves as a primary teaching tool for the School of Hotel Administration. Each year more than 200 SHA students work alongside professionals in a range of hotel and restaurant operations.