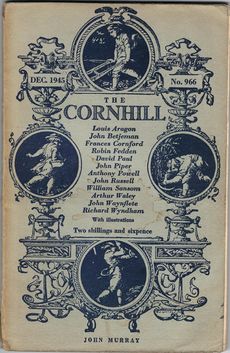 William James Linton's design of the front of The Cornhill Magazine, this copy from December 1945.

The Cornhill Magazine (1860–1975) was a Victorian magazine and literary journal named after the publisher's address at 65 Cornhill in London.[1][2]

Cornhill was founded by George Murray Smith in 1859,[3] the first issue carrying the cover date of January 1860. It continued until 1975. It was a literary journal with a selection of articles on diverse subjects and serialisations of new novels. Smith hoped to gain some of the same readership enjoyed by All the Year Round, a similar magazine owned by Charles Dickens, and he employed as editor William Thackeray,[1] Dickens' great literary rival at the time.

The magazine was phenomenally successful, selling many more issues than anyone had thought likely, but within a few years circulation dropped rapidly as it failed to keep pace with changes in popular taste. It also gained a reputation for rather safe, inoffensive content in the late Victorian era.[1] A mark of the high regard in which it was held was its publication of Leaves from the Journal of our Life in the Highlands by Queen Victoria. The stories were often illustrated and it contained works from some of the foremost artists of the time including: George du Maurier, Edwin Landseer, Frederic Leighton, and John Everett Millais. Some of its subsequent editors included G. H. Lewes, Leslie Stephen, Ronald Gorell Barnes, James Payn, Peter Quennell and Leonard Huxley.

Contributors to The Cornhill in the 1930s and 1940s included Elizabeth Bowen, Rose Macaulay, Mary Webb, D. K. Broster, and Nugent Barker.[4] From 1917 the magazine was published by John Murray of Albermarle Street, London.[5]

Important works serialised in the journal include the following: