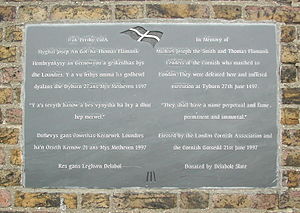 Commemorative plaque in Cornish and English for Michael Joseph the Smith (An Gof) and Thomas Flamank mounted on the north side of Blackheath common, south east London, near the south entrance to Greenwich Park

The Cornish Rebellion of 1497 (Cornish: Rebellyans Kernow) was a popular uprising by the people of Cornwall in the Kingdom of England. Its primary cause was the response by the impoverished Cornish populace to the raising of war taxes by King Henry VII to raise money for a campaign against Scotland. Tin miners were angered as the scale of the taxes overturned previous rights granted by Edward I of England to the Cornish Stannary Parliament, which exempted Cornwall from all taxes of 10ths or 15ths of income.

In 1496, after disagreements regarding new regulations for the tin-mining industry, King Henry VII suspended the privileges of the Stannaries.[1] In late 1496 the council approved a forced loan to which Cornwall contributed a disproportionately large share.[2] The primary cause of the rebellion was Henry VII's tax levy to pay for a war against the Scots. The terms of the levy violated the Stannary Charter of 1305 which prohibited taxes of 10ths and 15ths from being raised in Cornwall.[3] Cornwall had already contributed significantly to the Scottish expedition, even though it was not affected by any border incursions.

The first stirrings of protest arose in the parish of St Keverne on the Lizard peninsula, where there already was resentment against the actions of Sir John Oby, provost of Glasney College in Penryn, and the tax collector for that area.[4] In reaction to King Henry's tax levy, Michael Joseph (An Gof), a blacksmith from St. Keverne and Thomas Flamank a lawyer of Bodmin, incited many of the people of Cornwall into armed revolt against the King. The rebels included at least two former MPs, Flamank (MP for Bodmin in 1492) and William Antron (MP for Helston in 1491-92). An army some 15,000 strong marched into Devon, attracting support in terms of provisions and recruits as they went.[1]

From Taunton, they moved on to Wells, where they were joined by their most eminent recruit, James Touchet, the seventh Baron Audley, a member of the old nobility.[1] Despite this welcome and prestigious acquisition of support, An Gof, the blacksmith, remained in command of the army. Audley joined Thomas Flamank as joint 'political' leader of the expedition.

From Wells to Winchester and Kent

After issuing a declaration of grievances, the army left Wells and marched to Winchester via Bristol and Salisbury, remarkably unopposed as they progressed across the south of England. At this point, having come so far, there seems to have been some questioning of what exactly should be done. The King had shown no sign of willingness to concede the issue and, far from home, there must have come to the leadership the belated cold realisation that only force of arms would resolve the matter one way or the other. Flamank conceived the idea of trying to broaden the rising; to force the monarch into concessions by mobilising wider support for the Cornishmen. He proposed that they should head for Kent, 'the classic soil of protests', the home of the Peasants' Revolt of 1381 and Jack Cade's rebellion, to rally the volatile men of Kent to their banner. It was a subtle and ambitious strategy—but sadly misinformed. Although the Scottish War was as remote a project to the Kentishmen as to the Cornish, they not only declined to offer their support but went so far as to offer resistance under their Earl. Sadly disillusioned, the Cornish army retreated and some of the men quietly returned to their homes. The remainder, let go the pretence of acting against the King's ministers alone – they were prepared to give battle against the King himself.

Moving back west, by 13 June 1497 the Cornish army arrived at Guildford. Although shocked by the scale of the revolt and the speed of its approach, Henry VII had not been idle. The army of 8000 men assembled for Scotland under the command of Giles, Lord Daubeny, Henry's chief general and Lord Chamberlain, was recalled. Then the Earl of Surrey was sent north to conduct a defensive, holding operation against the Scots until such time as the King had quelled his domestic difficulties. The Royal family (and the Archbishop of Canterbury) moved to the Tower of London for safety whilst in the rest of the City there was panic among the common citizens. It is said there was a general cry of 'Every man to harness! To harness!' and a rush of armed citizenry to the walls and gates. Then, the same day that the Cornish arrived at Guildford, Daubeney and his men took up position upon Hounslow Heath and were cheered by the arrival of food and wine dispatched by the Lord Mayor of London.

The Crown decided to take the offensive and test the strength and resolve of the Cornish forces. Lord Daubeney sent out a force of 500 mounted spearmen and they clashed with the Cornish at 'Gill Down' outside Guildford on Wednesday 14 June 1497.

The Cornish army left Guildford and moved via Banstead and Chussex Plain to Blackheath where they pitched their final camp, looking down from the hill onto the Thames and City of London. Despite unrest among the Cornish forces, An Gof held his army together, but faced with overwhelming odds, some Cornish deserted and by morning there remained only some 9–10,000 Cornish stalwarts left in arms.

The Battle of Deptford Bridge (also known as Battle of Blackheath) took place on 17 June 1497 on a site in present-day Deptford south-east London, adjacent to the River Ravensbourne and was the culminating event of the Cornish Rebellion. Henry VII had mustered an army of some 25,000 men and the Cornish lacked the supporting cavalry and artillery arms essential to the professional forces of the time. After carefully spreading rumours that he would attack on the following Monday, Henry moved against the Cornish at dawn on his 'lucky day' – Saturday (17 June 1497). The Royal forces were divided into three 'battles', two under Lords Oxford, Essex and Suffolk, to wheel round the right flank and rear of enemy whilst the third waited in reserve. When the Cornish were duly surrounded, Lord Daubeney and the third 'battle' were ordered into frontal attack.

Cornish force at the bridge

At the bridge at Deptford Strand, the Cornish had placed a body of archers (utilising arrows a full yard long, 'so strong and mighty a bow the Cornishmen were said to draw') to block the passage of the river. Here Daubeney had a tense time, before his spearmen eventually captured the crossing with some losses (a mere 8 men or as many as 300 depending on one's source). The 'Great Chronicle of London' says that these were the only casualties suffered by the Royal forces that day but, in view of the severity of the later fighting, this seems most improbable.

Through ill-advice or inexperience, the Cornish had neglected to provide support for the men at Deptford Strand bridge and the main array stood well back into the heath, near to the top of the hill. This was a mistake since a reserve force charging down from the high ground might have held the bridge bottleneck and made the day a far more equal contest. As it was, Lord Daubeney and his troops poured across in strength and engaged the enemy with great vigour. Daubeney himself was so carried away that he became isolated from his men and was captured. Astoundingly enough, the Cornish simply released him and he soon returned to the fray. It would appear at this late stage, the rebels' hearts were no longer in the battle and they were already contemplating its aftermath and the King's revenge.

Continuation of the battle

The two other Royal divisions attacked the Cornish precisely as planned and, as Bacon succinctly put it: being ill-armed and ill-led, and without horse or artillery, they were with no great difficulty cut in pieces and put to flight. Estimates of the Cornish dead range from 200 to 2000 and a general slaughter of the broken army was well under way when An Gof gave the order for surrender. He fled but only got as far as Greenwich before being captured. The less enterprising Baron Audley and Thomas Flamank were taken on the field of battle.

By 2pm, Henry VII had returned to the City in triumph, knighting deserving parties on the way, to accept the acclamation of the Mayor and attend a service of thanksgiving at St Paul's.

In due course, severe monetary penalties, extracted by Crown agents, pauperised sections of Cornwall for years to come. Prisoners were sold into slavery and estates were seized and handed to more loyal subjects. The remaining rebels that escaped went home ending the rebellion. An Gof and Flamank were both sentenced to be hanged, drawn and quartered. However they "enjoyed" the king's mercy and were allowed to hang until dead before being decapitated. They were executed at Tyburn on 27 June 1497. An Gof is recorded to have said before his execution that he should have "a name perpetual and a fame permanent and immortal". Thomas Flamank was quoted as saying "Speak the truth and only then can you be free of your chains".

Audley, as a peer of the realm, was beheaded on 28 June at Tower Hill. Their heads were then displayed on pike-staffs ("gibbeted") on London Bridge.

Keskerdh Kernow (Cornish: Cornwall marches on!) was a commemorative march which retraced the original route of the Cornish from St. Keverne to Blackheath, London, to celebrate the Quincentennial—500th anniversary—of the Cornish Rebellion.

A statue depicting the Cornish leaders, "Michael An Gof" and Thomas Flamank was unveiled at An Gof's village of St. Keverne and a commemorative plaque was also unveiled on Blackheath common.