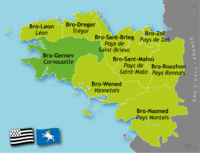 Cornouaille (Breton: Kernev or Kerne) is a historic region of Brittany in northwest France. The name is cognate with the Cornwall region of Britain. This can be explained by settlement of Cornouaille by migrant princes from Cornwall creating an independent principality (during the Anglo-Saxon invasions) from (430–1084 AD) founded by Rivelen Mor Marthou,[1][2] and the founding of the Bishopric of Cornouaille by ancient saints from the Cornwall region. The two regions spoke a similar Brythonic language which evolved into the Cornish language in Britain, and into a similar language, the Breton language across the English Channel in Brittany; both Breton and Cornish in turn are similar to Welsh.

Cornouaille was established in the early Middle Ages in the southwest of the Breton peninsula.[3] Prior to this, following the withdrawal of Rome from Britain other British migrants from what is now modern Devon had established the region of Domnonea (in Breton) or Domnonée (in French) in the north of the peninsula, taken from the Latin Dumnonia.

The region was first mentioned by this name between 852 and 857 when the Bishop of Saint-Corentin at Quimper Cathedral, Anaweten, took over Cornugallensis under the order of Nominoe, Duke of Brittany and Tad ar Vro. The name Cornwallis or Corn-wealas is from the name of a Brythonic tribe Latinized as Cornovii, meaning "peninsula people", from the Celtic "kernou", "horn, headland." It is a cognate of the English word "horn", both being from PIE *ker- "uppermost part of the body, head, horn, top, summit",[4][5] with the Anglo-Saxon suffix "-wealas", from walh, a word used by the Germanic speakers for "a non-Germanic foreigner", especially a "Celtic speaker" but also used for Romance speakers. Walh is an element found in the names Walloon, Wales, Wallachia, walnut, Wallace and Walsh.[6] The name was used in reference to the resettling of the Celts from Great Britain - the difference between la Grande Bretagne "Great Britain" and la Bretagne, "Brittany".

Strong contacts between Armorica (a larger region than the Duchy of Brittany or modern Brittany) and southern Britain had already been noted by Julius Caesar. Native British troops were hired to support the usurpation of Magnus Maximus, who is said to have settled them in Armorica. Settlements expanded when invading Anglo-Saxons expanded westward within Britain.[7] Strong links existed in the 6th century between the British and Armorican territories. Legends about King Arthur and the Matter of Britain make frequent reference to the maritime connections between the peoples of Wales, southern Ireland, Cornwall in southwestern Britain and the early kingdoms of Brittany, cf. the tale of Tristan and Iseult.

The existence of an ancient district in Anjou called "la Cornuaille" has led to the hypothesis that Cornouaille may have been a geographical or military label for all of southern Brittany as far as the northern shore of Domnonée in the 6th or 7th century.

At the origin of this feudal county, the reigning dynasty acceded to a dukedom of the region, which then passed to the Ancient Lord-Bishop of Quimper.

In Breton, Cornouaille is known as "Kernev" or "Bro-Gernev", and in Latin as "Cornugallia" or "Cornubia". In Cornish, "Kernev" is written "Kernow", but the pronunciation is the same.

The name Cornouaille signifies the diocese of Quimper which persisted until the French Revolution. The diocese covered more than half of the south of Finistère, and extended over part of Morbihan and the Côtes-d'Armor. There were two archdeacons, one for Cornouaille and one for Poher. There were also a cantor, a treasurer, a theologian and twelve canons. This episcopal division was the poorest in Brittany.

After the French Revolution, the new constitution created a diocese of Finistère, erasing that of the diocese of Kerne (Cournouaille); most of the old diocese was absorbed into the new.