From Infogalactic: the planetary knowledge core
Jump to: navigation, search
For other uses, see Cornucopia (disambiguation). 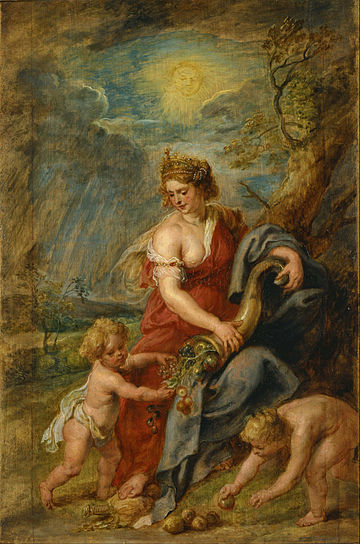 Allegorical depiction of the Roman goddess Abundantia with a cornucopia, by Rubens (ca. 1630)

The cornucopia (from Latin cornu copiae) or horn of plenty is a symbol of abundance and nourishment, commonly a large horn-shaped container overflowing with produce, flowers or nuts. The horn originates from classical antiquity, it has continued as a symbol in Western art, and it is particularly associated with the Thanksgiving holiday in North America. 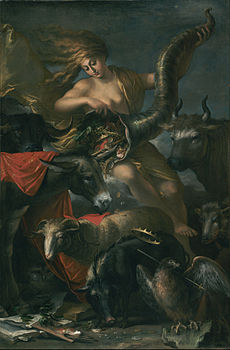 Allegory of Fortune (1658) by Salvator Rosa, representing Fortuna, the Goddess of luck, with the horn of plenty 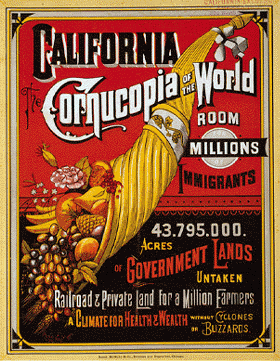 Poster of cornucopia for California 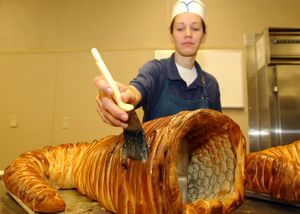 A cornucopia made of bread, prepared for a Thanksgiving meal in 2005 for U.S. Navy personnel

Mythology offers multiple explanations of the origin of the cornucopia. One of the best-known involves the birth and nurturance of the infant Zeus, who had to be hidden from his devouring father Kronus. In a cave on Mount Ida on the island of Crete, baby Zeus was cared for and protected by a number of divine attendants, including the goat Amalthea ("Nourishing Goddess"), who fed him with her milk. The suckling future king of the gods had unusual abilities and strength, and in playing with his nursemaid accidentally broke off one of her horns, which then had the divine power to provide unending nourishment, as the foster mother had to the god.[1]

In another myth, the cornucopia was created when Heracles (Roman Hercules) wrestled with the river god Achelous and wrenched off one of his horns; river gods were sometimes depicted as horned.[2] This version is represented in the Achelous and Hercules mural painting by the American Regionalist artist Thomas Hart Benton.

The cornucopia became the attribute of several Greek and Roman deities, particularly those associated with the harvest, prosperity, or spiritual abundance, such as personifications of Earth (Gaia or Terra); the child Plutus, god of riches and son of the grain goddess Demeter; the nymph Maia; and Fortuna, the goddess of luck, who had the power to grant prosperity. In Roman Imperial cult, abstract Roman deities who fostered peace (pax Romana) and prosperity were also depicted with a cornucopia, including Abundantia, "Abundance" personified, and Annona, goddess of the grain supply to the city of Rome. Pluto, the classical ruler of the underworld in the mystery religions, was a giver of agricultural, mineral and spiritual wealth, and in art often holds a cornucopia to distinguish him from the gloomier Hades, who holds a drinking horn instead.[3]

In modern depictions, the cornucopia is typically a hollow, horn-shaped wicker basket filled with various kinds of festive fruit and vegetables. In most of North America, the cornucopia has come to be associated with Thanksgiving and the harvest. Cornucopia is also the name of the annual November Food and Wine celebration in Whistler, British Columbia, Canada. Two cornucopias are seen in the flag and state seal of Idaho. The Great Seal of North Carolina depicts Liberty standing and Plenty holding a cornucopia. The coat of arms of Colombia, Panama, Peru and Venezuela, and the Coat of Arms of the State of Victoria, Australia, also feature the cornucopia, symbolising prosperity. In the book and film series The Hunger Games, the Cornucopia is filled with weapons, and is the starting point of the Games, and it is also the name of the Anthem of Panem.

The horn of plenty is used for body art and at Halloween, as it is a symbol of fertility, fortune and abundance.[4]