From Infogalactic: the planetary knowledge core
(Redirected from Corporation of the City of London)
Jump to: navigation, search

The Corporation is probably the world's oldest continuously-elected local government authority. Both businesses and residents of the City, or "Square Mile", are entitled to vote in elections, and in addition to its functions as the local authority – analogous to those undertaken by the boroughs that administer the rest of London – it takes responsibility for supporting the financial services industry and representing its interests.[4] The corporation's structure includes the Lord Mayor, the Court of Aldermen, the Court of Common Council, and the Freemen and Livery of the City.

In Anglo-Saxon times, consultation between the City's rulers and its citizens took place at the Folkmoot. Administration and judicial processes were conducted at the Court of Husting and the non-legal part of the court's work evolved into the Court of Aldermen.[5]

There is no surviving record of a charter first establishing the Corporation as a legal body, but the City is regarded as incorporated by prescription, meaning that the law presumes it to have been incorporated because it has for so long been regarded as such (e.g., Magna Carta states that "the City of London shall have/enjoy its ancient liberties").[6] The City of London Corporation has been granted various special privileges since the Norman Conquest,[7][8] and the Corporation's first recorded Royal Charter dates from around 1067, when William the Conqueror granted the citizens of London a charter confirming the rights and privileges that they had enjoyed since the time of Edward the Confessor. Numerous subsequent Royal Charters over the centuries confirmed and extended the citizens' rights.[9]

Around 1189, the City gained the right to have its own mayor, later being advanced to the degree and style of Lord Mayor of London. Over time, the Court of Aldermen sought increasing help from the City's commoners and this was eventually recognised with commoners being represented by the Court of Common Council, known by that name since at least as far back as 1376.[10] The earliest records of the business habits of the City's Chamberlains and Common Clerks, and the proceedings of the Courts of Common Council and Aldermen, begin in 1275, and are recorded in fifty volumes known as the Letter-Books of the City of London.[11]

The City of London Corporation had its privileges stripped by a writ Quo Warranto under Charles II in 1683, but they were later restored and confirmed by William and Mary in 1690, after the Glorious Revolution.[12]

With growing demands on the Corporation and a corresponding need to raise local taxes from the commoners, the Common Council grew in importance and has been the principal governing body of the City of London since the 18th century.

The Corporation is unique among British local authorities for its continuous legal existence over many centuries, and for having the power to alter its own constitution, which is done by an Act of Common Council.[13]

Local government legislation often makes special provision for the City to be treated as a London borough and for the Common Council to act as a local authority. The Corporation does not have general authority over the Middle Temple and the Inner Temple, two of the Inns of Court adjoining the west of the City which are historic extra-parochial areas, but many statutory functions of the Corporation are extended into these two areas.

The Chief Executive of the administrative side of the Corporation holds the ancient office of Town Clerk of London.

The High Officers and other officials

Because of its accumulated wealth and responsibilities the Corporation has a number of officers and officials unique to its structure who enjoy more autonomy than most local council officials, each has a separate budget: 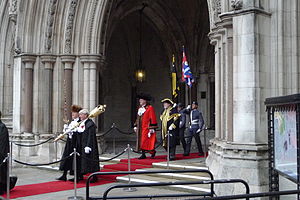 The Swordbearer and Macebearer walk ahead of the Lord Mayor, who is escorted by his Ward Beadle

a) The three Esquires at the Mansion House: The City Marshall, the Sword Bearer and the Mace Bearer (who is properly called 'the Common Cryer and Sergeant-at-Arms'); these officers run the Lord Mayor's official residence, the office, and accompany him on all occasions (usually senior military officers with diplomatic experience).

b) The Chief Commoner who is elected by the Common Councilmen alone and serves for one year; until recently chaired all of the Bridge House Estates and property matters committees but is now honorific.

c) The Ward Beadles; responsible to a specific Ward from which they are elected, largely ceremonial support to their respective Aldermen, and also perform a formal role at Ward Motes.

The City of London Corporation was not reformed by the Municipal Corporations Act 1835, because it had a more extensive electoral franchise than any other borough or city; in fact, it widened this further with its own equivalent legislation allowing one to become a freeman without being a liveryman. In 1801, the City had a population of about 130,000, but increasing development of the City as a central business district led to this falling to below 5,000 after the Second World War.[15] It has risen slightly to around 9,000 since, largely due to the development of the Barbican Estate. As it has not been affected by other municipal legislation over the period of time since then, its electoral practice has become increasingly anomalous.

Eligible voters[17] must be at least 18 years old and a citizen of the United Kingdom, a European Union country, or a Commonwealth country, and either:

Each body or organisation, whether unincorporated or incorporated, whose premises are within the City of London may appoint a number of voters based on the number of workers it employs. Limited liability partnerships fall into this category.

Though workers count as part of a workforce regardless of nationality, only certain individuals may be appointed as voters. Under section 5 of the City of London (Ward Elections) Act 2002, the following are eligible to be appointed as voters (the qualifying date is 1 September of the year of the election):

Main article: Wards of the City of London 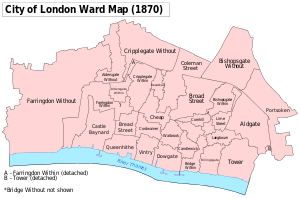 A map of the Wards as they were in the late 19th century. 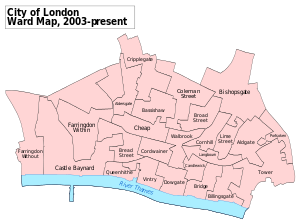 The City of London is divided into twenty-five Wards, each of which is an electoral division, electing one Alderman and a number of Councilmen based on the size of the electorate. The numbers below reflect the changes caused by the City of London (Ward Elections) Act and a recent Ward Boundary Review.

There are over one hundred livery companies in London. The companies originated as guilds or trade associations. The senior members of the livery companies, known as liverymen, form a special electorate known as Common Hall. Common Hall is the body that chooses the Lord Mayor of the City, the Sheriffs and certain other City Officers.

Wards originally elected Aldermen for life, but the term is now only six years. Aldermen may, if they so choose, submit to an election before the six-year period ends. In any case, an election must be held no later than six years after the previous election. The sole qualification for the office is that aldermen must be Freemen of the City.

Aldermen are ex officio Justices of the Peace (JP). All Aldermen also serve on the Court of Common Council. 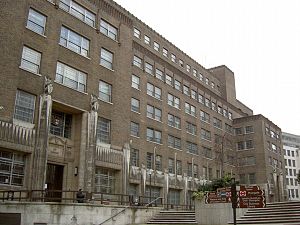 The Guildhall's north wing, housing most of the City's administration units

Each ward may choose a number of Common Councilmen. A Common Councilman must be a registered voter in a City Ward, own a freehold or lease land in the City, or reside in the City for the year prior to the election. He must also be over 21; a Freeman of the City; and a British, Irish, Commonwealth or EU citizen. Common Council elections are held every four years, most recently in March 2009. Common Councilmen may use the postnominals CC after their names.

The Common Council is the police authority for the City of London,[20] a police area that covers the City including the Inner Temple & Middle Temple and which has its own police force – the City of London Police – separate from the Metropolitan Police, which polices the remainder of Greater London.

Each year, the Common Councilmen elect one of their number to serve as Chief Commoner, an honorific office which 'serves to recognise the distinguished contribution the office holder is likely to have made to the City Corporation over a period of years.'[21] The Chief Commoner is expected to champion the Court of Common Council, to work to uphold its rights and privileges, and to offer advice and counsel to its members. S/he also represents the Court on various different committees, supports the Lord Mayor in the business of the Corporation and is prominently present on ceremonial occasions. The Chief Commoner is elected in October of each year and holds office for one year from the following April.

Since a by-election in the Ward of Portsoken on 20 March 2014 the political composition of the Court of Common Council has been 99 independent members and one Labour Party member.[22][23]

The Lord Mayor and the Sheriffs 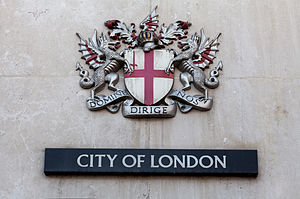 Coat of arms of the City of London. The Latin motto reads Domine Dirige Nos, "Lord, guide us".

Stuart Fraser, the Corporation's Deputy Policy Chairman wrote in 2011 "it is undoubtedly the case that we have more tradition and pageantry than most",[24] for example the yearly Lord Mayor's Show.

There are eight formal ceremonies involving the Corporation:

Tax journalist Nicholas Shaxson said, "Whenever The Queen makes a State entry to the City, she meets a red cord raised by City police at Temple Bar, and then engages in a colourful ceremony involving the Lord Mayor, his Sword, assorted Aldermen and Sheriffs, and a character called the Remembrancer. In this ceremony, the Lord Mayor recognises The Queen's authority, but the relationship is complex: as the corporation itself says: "The right of the City to run its own affairs was gradually won as concessions were gained from the Crown.""[25]

Main article: List of parks and open spaces managed by the City of London Corporation

The City of London Corporation maintains around 10,000 acres (40 km2) of public green spaces[26] – mainly conservation areas / nature reserves – in Greater London and the surrounding counties. The most well-known of the conservation areas are Hampstead Heath and Epping Forest. Other areas include Ashtead Common, Burnham Beeches, Highgate Wood and the City Commons (seven commons in south London).[27][28]

The Corporation also runs the unheated Parliament Hill Lido, in Hampstead Heath which the London Residuary Body with the agreement of the London Boroughs gave into the safekeeping of the City, for the benefit of the public, in 1989.

The City also owns and manages two traditional inner city parks: Queen's Park and West Ham Park as well as over 150 smaller public green spaces. All these green spaces are funded principally by the City of London.[29]

City of London residents may send their children to schools in neighbouring local education authorities (LEAs).

The Guildhall School of Music and Drama is owned and funded by the Corporation.

Writing in The Guardian, George Monbiot claimed that the corporation's power "helps to explain why regulation of the banks is scarcely better than it was before the crash, why there are no effective curbs on executive pay and bonuses and why successive governments fail to act against the UK's dependent tax havens" and suggested that its privileges could not withstand proper "public scrutiny".[32]

In December 2012, following criticism that it was insufficiently transparent about its finances, the City of London Corporation revealed that its "City’s Cash" account – an endowment fund built up over the past 800 years that it says is used "for the benefit of London as a whole"[33] – holds more than £1.3bn. The fund collects money made from the corporation’s property and investment earnings.[34]