From Infogalactic: the planetary knowledge core
Jump to: navigation, search
For other uses, see Corrections (disambiguation). 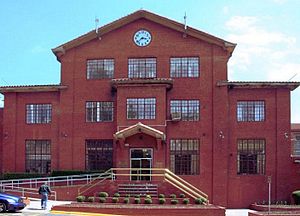 The Huntsville Unit of the Texas Department of Criminal Justice in Huntsville, Texas is a prison, a component of a correctional system 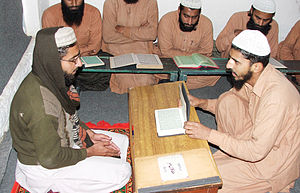 Qur'anic education for offenders at the Central Jail Faisalabad in Faisalabad, Pakistan

In criminal justice, particularly in North America, correction, corrections, and correctional, are umbrella terms describing a variety of functions typically carried out by government agencies, and involving the punishment, treatment, and supervision of persons who have been convicted of crimes.[1] These functions commonly include imprisonment, parole and probation.[2] A typical correctional institution is a prison. A correctional system, also known as a penal system, thus refers to a network of agencies that administer a jurisdiction's prisons and community-based programs like parole and probation boards;[3] this system is part of the larger criminal justice system, which additionally includes police, prosecution and courts.[4] Jurisdictions throughout Canada and the US have ministries or departments, respectively, of corrections, correctional services, or similarly named agencies.

Corrections is also the name of a field of academic study concerned with the theories, policies, and programs pertaining to the practice of corrections. Its object of study includes personnel training and management as well as the experiences of those on the other side of the fence — the unwilling subjects of the correctional process.[1] Stohr and colleagues write that "Earlier scholars were more honest, calling what we now call corrections by the name penology, which means the study of punishment for crime."[5]

The terminology change in US academia from "penology" to "corrections" occurred in the 1950s and 1960s, and it was driven by a new philosophy emphasizing rehabilitation. It was accompanied by concrete changes in some prisons, like giving more privileges to inmates, and attempting to instill a more communal atmosphere. At least nominally, most prisons became correctional institutions, and guards became correctional officers.[6] Although the corrections-related terminology continued thereafter in US correctional practice, the philosophical view on offenders' treatment took an opposite turn in the 1980s, when the "get tough" program was labeled by academics as "The New Penology".[7]

In Canada, until 1972, the Criminal Code legislated that courts could impose a form of whipping on male offenders, to be administered on up to three occasions, but did not limit the number of strokes. Whipping of female offenders was not allowed. The whipping could be inflicted using a strap, cat-o'-nine-tails, or a paddle unless specified by the court.[8] The move to abolish corporal punishment in the Canadian penal system coincided with several reforms and a change from the Reform Institutions label to Corrections or Correctional.

Intermediate sanctions include sentences to a halfway house or community service program, home confinement, and electronic monitoring, but also financial sanctions like fines, forfeiture, and restitution; these are sometimes applied in combination.[9]

The use of sanctions, which can be either positive (rewarding) or negative (punishment) is the basis of all criminal theory, along with the main goals of social control, and deterrence of deviant behavior.