In Spanish, Corte Madera means the imperative command "Chop wood", as in "To chop the wood". The area was famous for producing lumber out of redwood trees which went into the construction of the city of San Francisco. 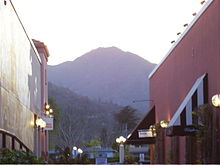 In 1850, California joined the Union, and the Gold Rush, by then a year old, brought more settlers to the area. By 1875, the North Pacific Coast Railroad set its tracks through Corte Madera, allowing flatcars to haul lumber, and later, passenger trains to service commuters to and from San Francisco, aided in its early stages by the Sausalito ferry. A few of those commuters significantly influenced the formation of Old Town.

In 1885, a New England lawyer, Frank Morrison Pixley, was guaranteed a title for 160 acres (0.65 km2) from Reed's daughter, Hilarita. (Pixley later practiced law in San Francisco, became involved in local politics and founded an esteemed magazine called The Argonaut, whose writers included Mark Twain and Ambrose Bierce.) The Pixley family was credited with creating Corte Madera's first subdivision and with developing downtown. Population continued to grow (eventually exploding after construction of the Golden Gate Bridge was completed in 1937).

The first business structure in Corte Madera was a hotel and tavern just south of the train station, built by Jerry Adams of Switzerland in 1898. The three-story building still exists today on First Street, between Corte Madera Avenue and Montecito Drive, and these days houses a beauty salon, an architectural sheet metal firm and a number of residential apartments. A smaller barn-like building constructed around that time behind the Adams's hotel went through its evolution as a hardware store, a mattress place, an antique shop, a design studio, a gallery and a neighborhood video store. Today it is a textile arts studio and Swedish textile home products store.[9]

Across from the railroad station, a huge barn was built in 1898, and was used as a livery stable, handy for horses to haul goods from nearby mines and for local freight delivery from the trains. In 1906, it then operated as Buckley & Co. general store for the next 50 years. After renovations, the barn exists today at the corner of Tamalpais Drive and Serra Street as a luxurious spa and full-service beauty salon.

In 1905, Del Mahood came to Corte Madera to be the railroad agent and stationmaster. He was also a telegrapher and, along with his brother Foster, Del operated the local telephone agency, the post office and a sweets shop in their building next to the Episcopal Church. The Mahoods' building still stands, over a century later, on Redwood Avenue. Other buildings remain from that era: the dramatic triangular-peaked Holy Innocents church built in 1901 at the northeastern corner of Old Corte Madera Square still stands, as does the Presbyterian Church built on the old road above the square around the same time. Across from the Holy Innocents Episcopal Church, two stucco structures were built in the early 1900s. That property, featuring a creamery and an automobile repair shop, now exists as a yoga studio. Most of the remaining buildings around the historical village square went up in the 1920s and '30s.

The square around the train station was the original center of Corte Madera, around which everything bloomed. Established in 1916 and preserved by the Women's Club, Railroad Park is located in the northwest quadrant of the old train station square. It was renamed Menke Park in the early 1950s after the town leased the property from the railroad and took over maintenance of the land. Several homes constructed during that time pay tribute to the New England-influenced architecture of the late 1880s, and can still be seen in the Old Square's surrounding neighborhoods.

The hill at the base of Corte Madera is called Christmas tree hill; because the lighted homes on the hill leading up to Mt. Tamalpais create the shape of a lighted Christmas tree.

The Fourth of July celebration—joining Corte Madera and its "twin city", Larkspur—draws thousands of spectators and residents from all over the Bay Area. The event includes a parade through Old Town, as well as festivities and a picnic in the nearby Town Park.

From the 1950s until the early 1970s, Holy Innocents Episcopal Parish held an Epiphany pageant with all of the church's younger members costumed and singing, followed by a Christmas tree bonfire in the triangle outside of the church. Residents would drop off their trees after Christmas and the fire department would supervise the burning on the twelfth day of Christmas (Epiphany). In some years, the church handed out candles to attendees. The rector of the church, Reverend Todd Ewald, chose to discontinue the bonfire in the early 1970s, saying he wanted to do it voluntarily before the growing environmental movement forced the change. 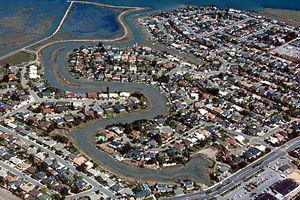 The Census reported that 100% of the population lived in households.

There were 3,776 households out of which 32.3% had children under the age of 18 living with them, 52.1% were married couples living together, 10.0% had a female householder with no husband present, and 34.5% were non-families. 24.8% of all households were made up of individuals and 7.8% had someone living alone who was 65 years of age or older. The average household size was 2.41 and the average family size was 2.89.

In the United States House of Representatives, Corte Madera is in California's 2nd congressional district, represented by Democrat Jared Huffman.[14] From 2008 to 2012, Huffman represented Marin County in the California State Assembly.

In the California State Legislature, Corte Madera is in:

Restoration Hardware and Il Fornaio are headquartered in Corte Madera.

The Larkspur-Corte Madera School District serves Corte Madera for elementary and middle school. Neil Cummins Elementary School and Hall Middle School serve both Corte Madera and Larkspur. To relieve overcrowding at the elementary level, students from 5th grade to 8th grade attend middle school. The former San Clemente Elementary School will be reopened in mid 2014 under a new name, The Cove School. In lieu of extensive retrofit to the existing structures, new buildings are being built on the same site. This school will serve neighborhoods currently served by Neil Cummins Elementary, mostly to the west of Highway 101, and new developments in the area.

A primary campus of the Lycée Français de San Francisco is in Corte Madera.[16]