From Infogalactic: the planetary knowledge core
Jump to: navigation, search
This article is about a type of warship. For the car, see Chevrolet Corvette. For other uses, see Corvette (disambiguation). 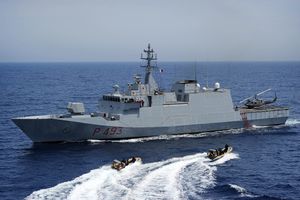 A corvette is a small warship. It is traditionally the smallest class of vessel considered to be a proper (or "rated") warship. The warship class above the corvette is that of the frigate, while the class below was historically that of the sloop-of-war. The modern types of ship below a corvette are coastal patrol craft and fast attack craft. In modern terms, a corvette is typically between 500 tons and 2,000 tons[1] although recent designs may approach 3,000 tons, which might instead be considered a small frigate.

The word "corvette" is first found in Middle French, a diminutive of the Dutch word corf, meaning a small ship, from the Latin corbis, meaning "basket".[2]

The rank "corvette captain", equivalent in many navies to "lieutenant commander", derives from the name of this type of ship. The rank is the most junior of three "captain" ranks in several European (e.g., France, Spain, Italy, Croatia) and South American (e.g., Argentina, Chile) navies, because a corvette, as the smallest class of rated warship, was traditionally the smallest class of vessel entitled to a commander of a "captain" rank.

During the Age of Sail, corvettes were one of many types of warships smaller than a frigate and with a single deck of guns.[3] They were very closely related to sloops-of-war. The role of the corvette consisted mostly of coastal patrol, fighting minor wars, supporting large fleets, or participating in show-the-flag missions. The English Navy began using small ships in the 1650s, but described them as sloops rather than corvettes. The first reference to a corvette was with the French Navy in the 1670s, which may be where the term originated. The French Navy's corvettes grew over the decades and by the 1780s they were ships of 20 guns or so, approximately equivalent to the British Navy's post ships. The British Navy did not adopt the term until the 1830s, long after the Napoleonic Wars, to describe a small sixth-rate vessel somewhat larger than a sloop.

Most corvettes and sloops of the 17th century were around 40 to 60 ft (12 to 18 m) in length and measured 40 to 70 tons burthen. They carried four to eight smaller guns on a single deck. Over time, vessels of increasing size and capability were called corvettes; by 1800, they reached lengths of over 100 ft (30 m) and measured from 400 to 600 tons burthen. 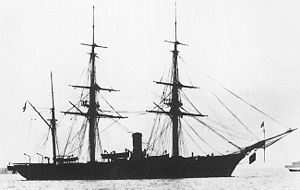 Ships during the steam era became much faster and more manoeuvrable than their sail ancestors. Corvettes during this era were typically used alongside gunboats during colonial missions. Battleships and other large vessels were unnecessary when fighting the indigenous people of the Far East and Africa.

The modern corvette appeared during World War II as an easily built patrol and convoy escort vessel.[3] The British naval designer William Reed drew up a small ship based on the single-shaft Smiths Dock Company whale catcher Southern Pride, whose simple design and mercantile construction standards lent itself to rapid production in large numbers in small yards unused to naval work. First Lord of the Admiralty Winston Churchill, later Prime Minister, had a hand in reviving the name "corvette".

During the arms buildup leading to World War II, the term "corvette" was almost attached to the Tribal-class destroyer. The Tribals were so much larger than and sufficiently different from other British destroyers that some consideration was given to resurrecting the classification of "corvette" and applying it to them. This idea was dropped, and the term applied to small, mass-produced antisubmarine escorts such as the Flower class of World War II.

The first modern corvettes were the Flower class (Royal Navy corvettes were named after flowers, and ships in Royal Canadian Navy service took the name of smaller Canadian cities and towns). Their chief duty was to protect convoys throughout the Battle of the Atlantic and on the routes from the UK to Murmansk carrying supplies to the Soviet Union.

The Flower-class corvette was originally designed for offshore patrol work, and was not ideal as an antisubmarine escort; they were really too short for open ocean work, too lightly armed for antiaircraft defence, and little faster than the merchantmen they escorted, a particular problem given the faster German U-boat designs then emerging. They were very seaworthy and maneuverable, but living conditions for ocean voyages were appalling. Because of this, the corvette was superseded in the Royal Navy as the escort ship of choice by the frigate, which was larger, faster, better armed, and had two shafts. However, many small yards could not produce vessels of frigate size, so an improved corvette design, the Castle class, was introduced later in the war, with some remaining in service until the mid-1950s.

The Royal Australian Navy built 60 Bathurst-class corvettes, including 20 for the Royal Navy crewed by Australians, and four for the Indian Navy. These were officially described as Australian mine sweepers, or as minesweeping sloops by the Royal Navy, and were named after Australian towns.

The Bird-class minesweepers or trawlers were referred to as corvettes in the Royal New Zealand Navy, and two, Kiwi and Moa, rammed and sank a much larger Japanese submarine, the I-1, in 1943 in the Solomons.

In Italy, the Regia Marina, in dire need of escort vessels for its convoys, designed the Gabbiano-class corvette, of which 59 were built between 1942 and 1943 (out of 60 planned); they proved apt at operations in the Mediterranean Sea, especially in regards to their anti-air and anti-submarine capability, and were so successful that the class survived after the war into the Marina Militare Italiana until 1972. 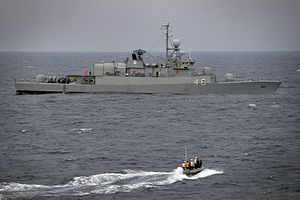 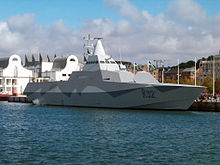 Modern navies began a trend in the late 20th and early 21st centuries towards smaller, more manoeuvrable surface capability. Corvettes have a displacement between 540 and 3,000 long tons (550 and 3,050 t) and measure 180–420 ft (55–128 m) in length. They are usually armed with medium- and small-caliber guns, surface-to-surface missiles, surface-to-air missiles, and antisubmarine weapons. Many can accommodate a small or medium antisubmarine warfare helicopter.

Most countries with coastlines can build corvette-sized ships, either as part of their commercial shipbuilding activities or in purpose-built yards, but the sensors, weapons, and other systems required for a surface combatant are more specialized and are around 60% of the total cost. These components are purchased on the international market.[4] 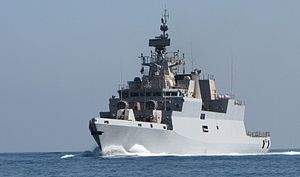 In the 1960s, the Portuguese Navy designed the João Coutinho-class corvettes as multirole small frigates intended to be affordable for a small navy. The João Coutinho-class would soon inspire a series of similar projects - including the Spanish Descubierta, the German MEKO 140, the French A69 and the own Portuguese Baptista de Andrade - adopted by a number of medium and small sized navies.

The United States is developing littoral combat ships, which are essentially large corvettes, their spacious hulls permitting space for mission modules, allowing them to undertake tasks formerly assigned to specialist classes such as minesweepers or the antisubmarine Oliver Hazard Perry-class frigate.

The Israeli navy operates three Saar 5-class corvettes. Built in the U.S to an Israeli design, they carry 1 helicopter and are well-armed with offensive and defensive weapons systems, including the Barak 8 SAM, and advanced electronic sensors and countermeasures. They displace over 1200 tons at full load.

Turkey began to build MİLGEM-class corvettes in 2005. The MİLGEM class is designed for antisubmarine warfare and littoral patrol duty. The lead ship, TCG Heybeliada, entered navy service in 2011. The design concept and mission profile of the MİLGEM class is similar to the Freedom class of littoral combat ships of the United States. 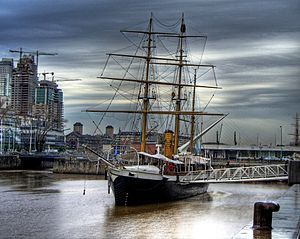 ARA Uruguay, an Argentine corvette from 1874, has been a museum ship in Buenos Aires since 1967