Cosimo di Giovanni de' Medici (27 September 1389 – 1 August 1464) was the first of the Medici political dynasty, de facto rulers of Florence during much of the Italian Renaissance; also known as "Cosimo 'the Elder'" ("il Vecchio") and "Cosimo Pater Patriae" (Latin: 'father of the nation'). His power derived from his great wealth as a banker, and he was a great patron of learning, the arts and architecture.[1]

Born in Florence, Cosimo inherited both his wealth and his expertise in banking from his father, Giovanni di Bicci de' Medici. In 1415, he accompanied the Antipope John XXIII at the Council of Constance, and in the same year he was named "Priore of the Republic." Later he acted frequently as ambassador, showing a prudence for which he became renowned.

About 1415, Cosimo married Contessina de' Bardi (the daughter of Giovanni, count of Vernio, and Cammilla Pannocchieschi).[2] They had two sons: Piero the Gouty and Giovanni de' Medici.[3] Cosimo also had an illegitimate son, Carlo de' Medici (1430-1492) by a Circassian slave. Carlo became a prelate. 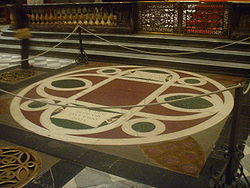 On his death in 1464 at Careggi, Cosimo was succeeded by his son Piero "the Gouty", father of Lorenzo the Magnificent or Il Magnifico. After his death the Signoria awarded him the title Pater Patriae, "Father of his Country", an honor once awarded to Cicero, and had it carved upon his tomb in the Church of San Lorenzo.

His power over Florence stemmed from his wealth, which he used to control votes. As Florence was proud of its 'democracy', he pretended to have little political ambition, and did not often hold public office. Aeneas Sylvius, Bishop of Siena and later Pope Pius II, said of him:

Political questions are settled in [Cosimo's] house. The man he chooses holds office...He it is who decides peace and war...He is king in all but name."[5]

In 1433 Cosimo's power over Florence, which he exerted without occupying public office, began to look like a menace to the anti-Medici party, led by figures such as Palla Strozzi and Rinaldo degli Albizzi: in September of that year he was imprisoned, accused for the failure of the conquest of Lucca, but he managed to turn the jail term into one of exile. He went to Padua and then to Venice, taking his bank along with him. Prompted by his influence and his money, others followed him: within a year, the flight of capital from Florence was so great that the ban of exile had to be lifted. Cosimo returned a year later in 1434, to greatly influence the government of Florence (especially through the Pitti and Soderini families) and to lead by example for the rest of his long life. 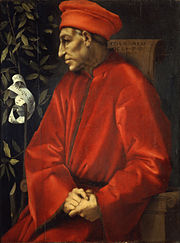 Portrait by Jacopo Pontormo; the laurel branch (il Broncone) was a symbol used also by his heirs[6]

Cosimo's time in exile instilled in him the need to squash the factionalism that resulted in his exile in the first place. In order to do this, Cosimo, with the help of favourable priors in the Signoria, instigated a series of constitutional changes to secure his power through influence.

In terms of foreign policy, Cosimo worked to create peace in Northern Italy through the creation of a balance of power between Florence, Naples, Venice and Milan during the wars in Lombardy, and discouraging outside powers (notably the French and the Holy Roman Empire) from interfering. In 1439 he was also instrumental in convincing pope Eugene IV to move the Ecumenical council of Ferrara to Florence. The arrival of notable Byzantine figures from the Empire in the East, including Emperor John VIII Palaiologos himself, started the boom of culture and arts in the city. 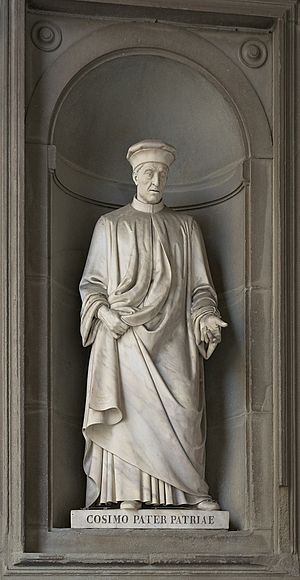 Cosimo was also noted for his patronage of culture and the arts during the Renaissance, liberally spending the family fortune (which his astute business sense considerably increased) to enrich Florence. According to Salviati's Zibaldone, Cosimo stated: "All those things have given me the greatest satisfaction and contentment because they are not only for the honor of God but are likewise for my own remembrance. For fifty years, I have done nothing else but earn money and spend money; and it became clear that spending money gives me greater pleasure than earning it."[7] Additionally, his patronage of the arts both recognized and proclaimed the humanistic responsibility of the civic duty that came with wealth.[8]

Cosimo hired the young Michelozzo Michelozzi to create what is today perhaps the prototypical Florentine palazzo, the austere and magnificent Palazzo Medici. The building still includes, as its only 15th-century interior that is largely intact, the Magi Chapel frescoed by Benozzo Gozzoli, completed in 1461 with portraits of members of the Medici family parading through Tuscany in the guise of the Three Wise Men. He was a patron and confidante of Fra Angelico, Fra Filippo Lippi, and Donatello, whose famed David and Judith Slaying Holofernes were Medici commissions. Cosimo's patronage enabled the eccentric and bankrupt architect Brunelleschi to complete the dome of Santa Maria del Fiore (the "Duomo") which was perhaps his crowning achievement as sponsor.

Cosimo de' Medici also founded the first public library in Florence, in 1444 at San Marco. It was of central importance to the humanist movement in Florence during the Renaissance. It was designed by Michelozzo, a student of Ghiberti who later collaborated with Donatello and was also a good friend and patron to Cosimo. Cosimo contributed the funds necessary to repair the library and provide it with a book collection, which people were allowed to use at no charge. "That Cosimo de'Medici was able to finance the construction of such a site placed him in a privileged position of leadership in the city. He hand-selected those individuals who were given access to this laboratory of learning, and, through this social dynamic, he actively shaped the politics of the Republic."[9] He also commissioned Michelangelo to design a library for his grandson, Lorenzo de' Medici. His first library, however, was designed by Michelozzo while the two were in Venice, where Cosimo had been temporarily exiled. In 1433, in gratitude for the hospitality of that city, he left it a gift of a new library, his only such work outside Florence.[10] His libraries were noted for their renaissance style of architecture and important artwork.

Cosimo had grown up with only three books, but by the time he was thirty his collection had grown to 70 volumes. After being introduced to humanism by a group of humanists who had asked for his help in preserving books, he grew to love the movement and gladly sponsored the effort to renew Greek and Roman civilization through literature. The humanists also engendered in him an interest in the collecting of books. "Heartened by the romantic wanderlust of a true bibliophile, the austere banker even embarked on several journeys in the hunt for books, while guaranteeing just about any undertaking that involved books. He financed trips to nearly every European town as well as to Syria, Egypt, and Greece organized by Poggio [Bracciolini], his chief book scout."[10]

In the realm of philosophy, Cosimo, influenced by the lectures of Gemistus Plethon, supported Marsilio Ficino and his attempts at reviving Neo-Platonism. Cosimo commissioned Ficino's Latin translation of the complete works of Plato (the first ever complete translation) and collected a vast library which he shared with intellectuals such as Niccolo Niccoli and Leonardo Bruni.[11] He provided his grandson, Lorenzo il Magnifico, with an education in the studia humanitatis. Cosimo had an inestimable influence on Renaissance intellectual life.