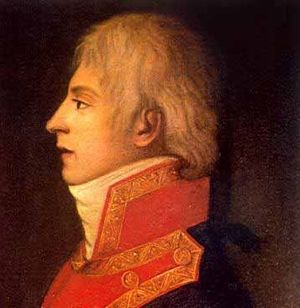 Cosme Damián de Churruca y Elorza (Mutriku, 27 September 1761 – Battle of Trafalgar, 21 October 1805) was a Basque Spanish noble, an Admiral of the Royal Spanish Armada, scientist and Mayor of Mutriku, who died at the Battle of Trafalgar while commanding the ship of the line San Juan Nepomuceno.

He received his early years education in the Seminary of Burgos. Then, he entered the School of Bergara.

In 1781, Cosme Damián de Churruca, as an officer of the Spanish Navy, performed heroically in a siege of Gibraltar.

The squadron to which the San Juan was assigned sailed on the 13th of August from the port of Ferrol. General Gravina had given Churruca a place of honour, the head of the vanguard. Churruca completed his mission with the highest merit and upon his arrival to Cadiz, redoubled his efforts in training his recently recruited and inexperienced civilian crew. It was at this time he married Maria de los Dolores Ruiz de Apodaca, daughter of Brigadier don Vicente, and cousin of the duke of Venadito.

With the Spanish and French squadrons reunited in the port of Cadiz, they sailed on a course to Marticina, where they took the fort of Del Diamante and captured a British convoy consisting of 12 vessels; in these moments Villeneuve, the chief of the combined fleet, was informed of the presence of Nelson in the Antillas. Villeneuve now decided he had completed his objective, which was to draw British naval forces to the other shore of the Atlantic, so he decided to sail the combined fleet back to Ferrol. However, in the cape of Finisterre, he bumped into the squadron of Admiral Calder, where a battle ensued. The majority of the French squadron continued to Ferrol, while the remaining ships were left to fend for themselves. Their defeat is attributed to the indecision and poor command of the chief of the combined squadron, Villeneuve, by Napoleon, who upon reading reports of the battle said: “The Spanish have behaved like lions, while their admiral only offered curses.”

The combined fleet entered Ferrol after the battle, proceeding in continuation to La Coruña. From this port, Villeneuve set a course to Cadiz, ignoring Napoleon’s order to go to Brest. Once there, despite the protests and opposing opinions of Churruca, Gravina and Alcalá-Galiano, Villeneuve abandoned the Bay of Cádiz to reach Nelson at the Cape of Trafalgar on the 21st of October 1805. Before sailing on the 20th of October, Churruca wrote to his brother:

On the San Juan in Cádiz on the 11th of October. Dear brother: since we left Ferrol nobody has received their pay, despite these being declared in advance and classified as soldiers’ prest. To this end they are owed four months, and they hold no hope of seeing one real in a long time; they owe us four months of salary as well, but we won’t receive a morsel, despite the hard work we are doing: Because of this I cannot thank you enough for freeing Dolores from the hardships she would suffer to pay you 1.356 reales, which I will reimburse you as soon as I can. In the meantime I have found in Ferrol a rich friend who will help Dolores as she needs, and I remain calm in having decently assured her sustenance. This is the work with which we serve the King, that in no grade can we rely on our wages (…) If you come to hear that my ship has been taken, know that I am dead.

The 21st of October dawned, and in sight of the British fleet Churruca ordered the colours to be nailed to the mast, and ordered that they should not be taken down while he still lived. Under the command of Churruca, the San Juan Nepomuceno demonstrated military precision, daring and efficiency, despite finding itself alone against six English ships, including HMS Defiance, HMS Tonnant, HMS Bellerophon and HMS Dreadnought. After being reached by a cannonball which tore his leg, Dhurruca died with the admiration of his enemies, who displayed his vessel in Gibraltar to visitors with his name written in golden letters above the cabin, and advising those who would enter to remove their covers, as if don Cosme Damián de Churruca y Elorza was still present. His officers kept their word, and only lowered the colours after his death. Unable to break the circle of fire and in order to prevent the vessel sinking with all wounded trapped below, the San Juan yielded with over 100 dead and 150 wounded on board.

Churruca was posthumously promoted to admiral, and in his memory his cousin received the title Count of Churruca. The events to which Churruca was a protagonist, were novelised in 1872 by Benito Pérez Galdós, in Trafalgar, the first title of his Episodios Nacionales.

A statue in his memory stands in his native Motrico, as well as Ferrol, where a simple monument records his passing by the Academy. In San Fernando there is a stone in the third pulpit of the Panteon de Marinos Ilustres (Pantheon of Illustrious Sailors) which reads:

To the memory of Brigadier of the Navy Don Cosme Damián de Churruca, gloriously dead on the ship of his command San Juan Nepomuceno in the combat of Trafalgar. 21 of October in 1805

After Trafalgar, the ship was taken to Gibraltar and entered British service, initially as HMS Berwick, before her Spanish name was restored. In honour of Churruca's courage, his cabin bore his name on a brass plate, and all who entered were required to remove their hat as a mark of respect for a gallant enemy. HMS San Juan served as a supply hulk in Gibraltar until 1815, when she was broken up. [1]